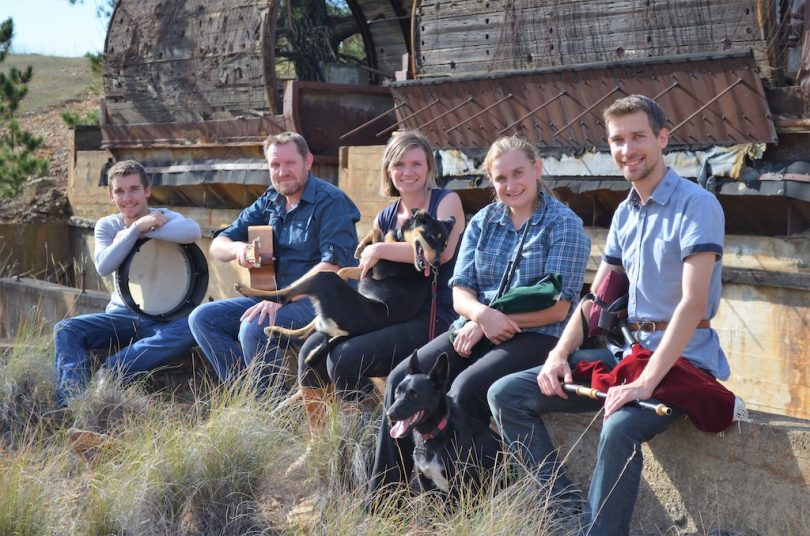 How to win a national award at the Australian Celtic Festival, the premier Celtic event of NSW in Glen Innes:

For this is how the five-piece Mad Kelpie Playdate, formed in 2017, won Instrumental of the Year. Sean Hodgman, the uillean (Irish bagpipes) playing physicist says the band was a little surprised because fellow finalists were outstanding, professional musicians.

“We thought, ‘Oh well, we are a bunch of amateurs having a bit of fun with music. The track that was nominated, ‘Cheroke Shuffle’, is not a Celtic track anyway, it is actually a bluegrass tune originally, we had taken uillean pipes and Celtic percussion and added to it. In the end we won!”. Bluegrass is strongly rooted in Celtic traditions, the winners played it in their distinctly different style.

It all started when Canberra Burns Club Pipe Band members would join each other after events, bus trips and competitions entertaining themselves. After a while Sean, his brother Mitch, of Canberra, who plays the Bodhran (Irish drums and other forms of percussion), Jess and Anna Hutchison (flute) and Cameron Lyon (guitar) decided a band would be fun.

Jess, (Scottish small pipes and spoons) is a public servant and lives in Queanbeyan. Anna is from the village of Gunning, where they will present a concert on May 26. The band mostly practices at Cameron’s place at Burra. He works at the space station.

“We all have dogs, which are either kelpies or kelpie-crosses, and as people who are familiar with them would know, kelpies have a lot of energy. They always need to be entertained and it is always a struggle to wear them out and keep them amused, and not destroying the place,” he says.

The uillean and small pipes blend nicely together, creating an uncommon sound. “They just harmonise well, sort of fill in the gaps each of them is missing,” Sean says.

“Often people have not heard it, so your ear takes a bit of getting used to. There is a lot of intricate stuff going on, and a lot only comes out in the recordings as well, sometimes at live gigs you miss bits,” he says.

Coming from a pipe band background, from where intricate harmonies are required at top-level competition, the band strives for that quality.

“We do a set of reels we call the Train Wreck Reels, there are four different tunes, a couple of traditional ones, a couple of more contemporary compositions, that always gets a good reaction too,” Sean says.

“We don’t tend to play for formal dances, we are not experts at calling dances, we can call one dance, Strip the Willow, which people get up and dance the jigs we play. Otherwise sometimes crowd members just get up and do whatever, sometimes they do a bit of Irish dancing, because our tunes are very traditional Irish or Scottish as well,” Sean says.

They produced a CD a year ago, recording eight tracks at Amberley studios, Canberra, with Guy Lilleyman. “We did it in one day because we had a tight budget, and tight window, Mitch our drummer was flying off to Scotland to play in a pipe band for competition season.”

Sean says Cameron’s dream is the band playing at Port Fairy Folk Festival, a massive event in Victoria. “You never know, maybe one day,” he says.

Mark Johnson - 9 hours ago
Belinda Makrides don’t think it would make a difference. Toyota have a pretty good rep no matter where they are made. The H... View
Mark Wallin - 10 hours ago
A car you operate rather than drive. View
News 42

doomattheend - 9 hours ago
Good to see the Greens MLA attacking a private school for a federal issue rather than keeping the labour party in check. Of c... View
Opinion 43

Kalo Arepo - 11 hours ago
Also in cases of bushfires gum trees explode like bombs whereas many species of exotic deciduous trees are fire retardant-thi... View
show more show less
*Results are based on activity within last 7 days