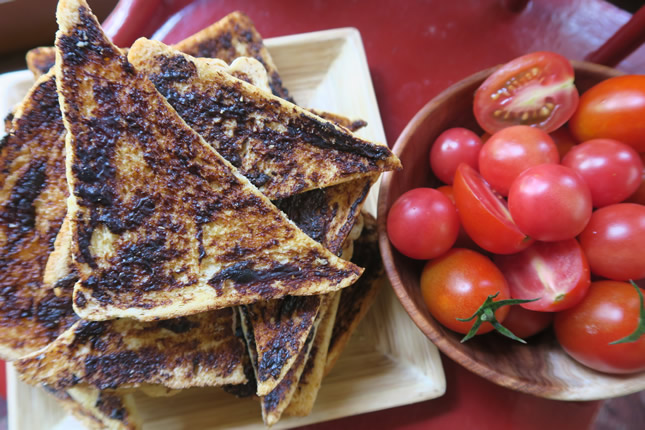 Vegemite is quintessentially Australian and happily, is now back in Australian hands having recently been bought by Bega Cheese. To celebrate Australia Day I offer these crispy vegemite toasts as a tasty snack for children. If you like vegemite you will also find them quite more-ish.

I made them often for my children and their friends in the 1980s and they loved them. The toasts are easy to make and handy to have for school lunches and after school. Simply spread butter and vegemite on sandwich bread and toast in the oven until dry and crisp.

The quantities given in the recipe are just as a guide. I have tried making the toasts with wholemeal bread and they tasted like cardboard so I stick to white bread.

Spread the slices of bread from edge to edge and not too thickly first with butter and then vegemite. Cut the slices in half diagonally or straight across and place on an oven tray. Bake until dry and crisp, about 30 minutes. Check them before this as the time will vary due to the thickness and freshness of the bread.

Cool the vegemite toasts on a rack and then store in an airtight container. Serve as a snack with cherry tomatoes or mashed avocado.

Well burger me – it’s a day of celebration

Hot in the City: Cup and Coaster’s all day menu hits the spot with its Filipino dishes