The dispute over the ANU library mergers continues, reaching farcical highs now that The Canberra Times has run more stories about it than the University’s on campus rag Woroni. Curious though is why the article doesn’t mention why the dispute is continuing. Perhaps in copy and pasting the media release writing the article, CT forgot to add the key fact that the University is still waiting for students to make a submission on the proposal, as the Vice Chancellor invited two months ago. Instead, students offer a video of the library merger – “the crime of the century“.

The proposal in its current form will create appreciable disadvantages for students campus wide in terms of library capacity. Further, it does not represent a sensible, medium to long term solution.

This is an ideal opportunity to negotiate with the University, accepting the advantages of a merger but working to undertake it in a form with greater longevity that can actually benefit students.

Yet, students are not making a submission and not negotiating.

If the University provides an opportunity to participate and have a voice and instead students choose to stand on the periphery shouting blankly “no”… so be it.

The library merger will go ahead and students will be to blame for their own disadvantage. 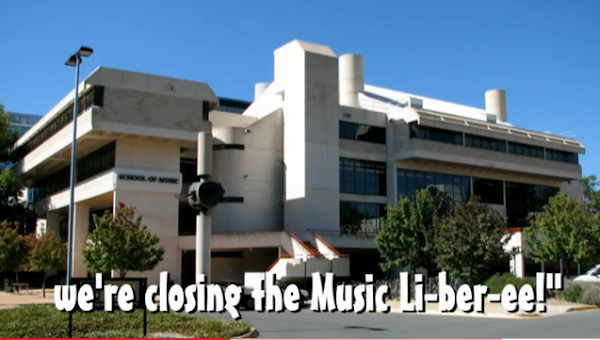 ” I would call on those students involved to spend the next four weeks of non-class time……” you think you’re pretty important don’t you “creative Canberran”? This is the Riot Act, not the legislative assembly.

UPDATE: The documents containing correspondence on this matter were finally posted on the ANU Music and Art Libraries Facebook group today along with this message:

“Apologies for not posting these up earlier, was a bit caught up with end of sem exams/assignments. Needed some prompting.”

The documents confirm that my article above is accurate. The student submission has NOT been made yet. Instead, students submitted a very brief letter to the VC consisting of dot points and bold typed sentences saying the proposal was too abstract to make a submission on. The letter seeks confirmation on a number of points. The VC responded (in the final image in the above link) essentially saying hurry up and make your argument, the detailed planning you want is done after an in principle decision is made.

So because students have stalled in making a cogent submission, their ineptitude is continuing this dispute. I would call on those students involved to spend the next four weeks of non-class time to make a considered, mature and forward thinking submission that the University will take seriously and will propose measures to benefit students in the long term.

They should rename it ‘Moroni’…

Can Creative_Canberran explain how closing one library and moving all its materials to another location will be better for library capacity?

I never said that, in fact I clearly say the following in the article:

“The proposal in its current form will create appreciable disadvantages for students campus wide in terms of library capacity.”

The submission was written by a group of students who responded to a message on the facebook group (which anyone is free to join). The response was posted around the school and was the subject of much discussion.

Please post a copy of the submission and the response from the university to the ANU Art and Music Libraries Facebook group then: http://www.facebook.com/pages/ANU-Music-Art-School-Libraries/101631686584779

You’ve had no trouble posting scans of CT articles and links to news stories about other library restructures, seems odd you wouldn’t post a copy of the submission and the ANU response. Crucial documents wouldn’t you agree.

I had assumed given that a student rep had told me via email in May “the students are meeting…” that it was appropriate to refer to “the students”. I note that the article in the Canberra Times also uses the phrase “the students” along with “music students”. How else does one refer to a body of people with a common cause?

What is CCs reason for engaging in this debate? I am quite prepared to say that I am an honours student (and heavy library user) at the School of Music. Who are you?

Honours student and your user name is of a classical music origin. Sounds like you may well be the Music Rep, which means you should probably give some disclosure if you are.

My interest is that campus libraries are already packed at peak times. Shrinking these two libraries will only add to that problem. Impacting my use of the other campus libraries which are identified by ANU as overflow. So this directly affects me and I want to make sure that what happens is a sensible, long term solution for all campus users.

So post the submission and the reply on the group. Put your money where your mouth is.

Two libraries getting amalgamated as ‘the crime of the century’.

I’m not sure what library protest the Creative Canberran has been following, but s/he should really check some facts. The submission was written by a group of students who responded to a message on the facebook group (which anyone is free to join). The response was posted around the school and was the subject of much discussion.
Does Creative Canberran actually talk to students, or does s/he just make things up to suit his/her pre-established beliefs about creative arts students.
Can Creative_Canberran explain how closing one library and moving all its materials to another location will be better for library capacity?
Perhaps the biggest flaw in CCs argument is the constant description of the “students” as if they were actually one person, with one agenda and one set of ideas. Both schools are home to hundreds of students who all have individual opinions, and a large number have voiced these directly to the university management. What is CCs reason for engaging in this debate? I am quite prepared to say that I am an honours student (and heavy library user) at the School of Music. Who are you?

UPDATE: According to someone on YouTube, a submission has been made by students. This apparently occurred in mid-may, which is curious given others said in late may nothing had been done yet. Put it down to poor planning and communication I would say. If this is true, then neither I nor the music students I’ve spoken to were made aware of it been submitted.

Julie Macklin - 7 hours ago
Eight storeys. I wonder if the shadow from the building will reach as far as Green Square late in the day in winter, when peo... View
Lucinda Morgan - 9 hours ago
Yet another soulless building full of badly designed apartments the size of dog boxes & marketed as the latest in design & fu... View
Robert McMahon - 10 hours ago
It’ll dominate the skyline in that area. Oh dear. View
News 7

Sean Bishop - 9 hours ago
Daniel nailed it View
Stefan Stirzaker - 11 hours ago
Good to see the white-anting after the fact in a bid to reduce the amazingly good job done by the upper leadership and member... View
HiddenDragon - 12 hours ago
The politics and the personalities are ultimately secondary issues - with increasingly nasty summers on the way, we need to d... View
Property 7

Ian Fraser - 14 hours ago
Sure Elizabeth, but be wary of coastal ones which won't like clay soil or frosts. And be aware that the local Silver Banksia... View
Property 28

One of the ACT's most iconic getaways, the Corin Forest Alpine Resort, will open its snowplay sessions this weekend only...
News 7

Explosive claims from a leaked internal document about the Emergency Service Agency's handling of the recent bushfire season are "totally...
Breaking 0

A woman has been airlifted to hospital after being attacked by two lions at the Shoalhaven Zoo on the South...
*Results are based on activity within last 7 days

After a political brawl of epic proportions between John Barilaro and Andrew Constance, the Liberal Party's Eden-Monaro preselection process has...
News 18

Closure is a much sought-after state following trauma and for those still angry about the Whitlam government's dismissal almost 45...
Property 15

A Geocon proposal for an eight-storey mixed-use development in Kingston is out of step with the character of the area...
Sport 15

Major sport is about to resume in Australia in front of empty stadiums. Do we need cardboard cut-outs of fans...

@The_RiotACT @The_RiotACT
Sporting clubs in the ACT are raring to get back in the game, but there are big question marks over what season 2020 will look like. Tim Gavel investigates how teams across the ACT are faring as they face the most challenging season ever https://t.co/OlRimYPcqx (20 minutes ago)

@The_RiotACT @The_RiotACT
The closure of the National Zoo and Aquarium was tough for local animal lovers, but over the long weekend, joyous kids and adults descended on popular Canberra destination when its gates swung open to the public for the first time since March https://t.co/8zvADdSmvj (10 hours ago)

@The_RiotACT @The_RiotACT
White Chaco, with its fresh Taiwanese, Japanese & Chinese fusion food, is a Braddon gem worth seeking out https://t.co/R7NyKgBCqZ (11 hours ago)