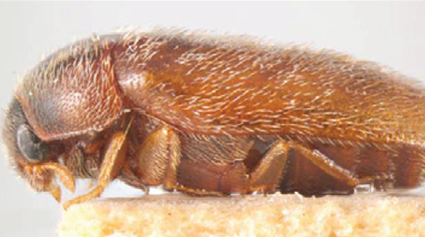 An adult khapra beetle. Photo: Department of Agriculture, Water and the Environment.

The risk of contamination to Australia’s grain, nut and dried fruit industries by a recent importation of khapra beetle to the ACT is under control, according to the Federal Department of Agriculture, Water and the Environment.

She said the department has “tracked and traced all of the premises” where the shipment of electrical goods containing the beetle from overseas had gone to, and that there would be “ongoing surveillance of those premises to make sure there is no khapra beetle remaining”.

“The containers that were contaminated with khapra have been fumigated and we’ve also treated the premises where those containers were stored with various chemicals,” said Dr Cleland. “So we’re confident the beetle hasn’t got through.”

Khapra beetle is number two on Australia’s list of National Priority Plant Pests and was discovered in August in a shipment of fridges from Thailand destined for The Good Guys stores in the ACT.

A member of the public contacted the department when they found the beetle on their new fridge.

Khapra beetle is a serious danger to stored grain and dried food products, and the containers weren’t inspected by the department because they didn’t contain food, Dr Cleland told Landline.

However, the containers did contain cast skins and hairs of the beetle.

The Khapra beetle is smaller than a grain of rice and can be found in between cracks and wall linings of storage containers. It spreads quickly in hot conditions and can live for a long time without any food, Dr Cleland said.

An incursion of the beetle had the potential to cost the agriculture industry more than $15 billion.

Importers, businesses and consumers are asked to report anything unusual in their imported goods. To report a biosecurity concern visit the Department of Agriculture, Water and the Environment or call the See. Secure. Report hotline on 1800 798 636.

Khapra beetle larvae are 1.6 to 7 mm long, golden brown with distinctive hairs across the body, including longer hairs at the end of the body that resemble a tail. Adults are less common, and are 2 to 3 mm long, oval-shaped, light yellowish-brown to dark brown and covered with many fine hairs.