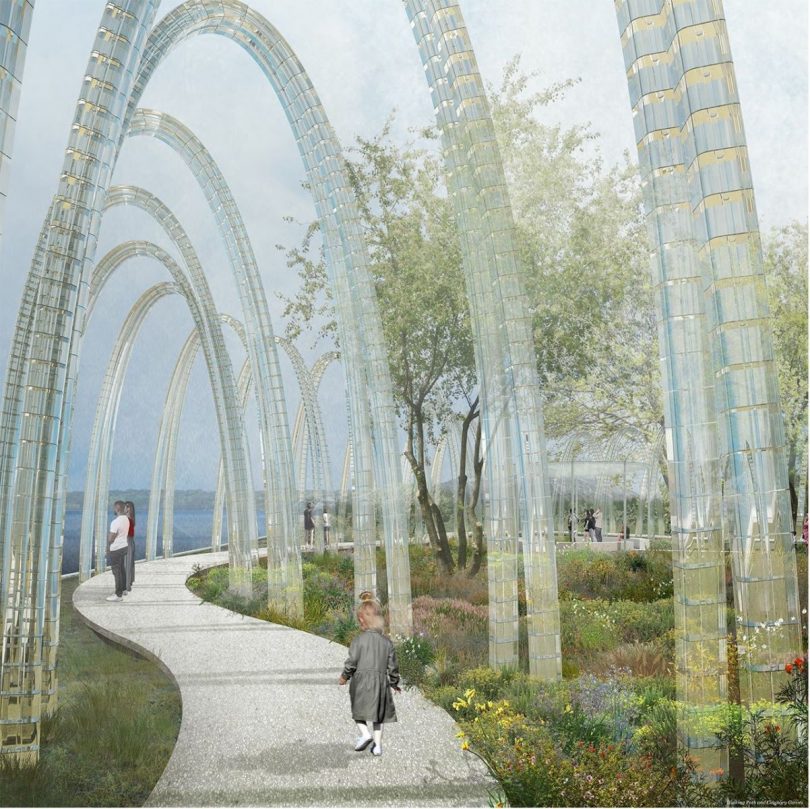 A conceptual illustration of the memorial to victims and survivors of child sexual abuse will be built on the shores of Lake Burley Griffin titled ‘Transparency and Truth’ by Jessica Spresser and Peter Besley. Image: DSS.

A series of glass archways over pathways, surrounded by a field of wildflowers, will be built on the shores of Lake Burley Griffin as a memorial to victims and survivors of child sexual abuse.

The successful design is ‘Transparency and Truth’ by architects Jessica Spresser and Peter Besley – both of whom were recently selected to design a new Pier Pavilion on Sydney Harbour.

Its glass archways are intended to signify strength, fragility and resilience.

The architects said the design seeks to balance an acknowledgement of strength and vitality with a recognition of trauma and loss.

“The individual pieces of cast glass carry immense loads yet together create forms of exceptional grace and lightness, representing both fragility and great resilience,” they said.

The national memorial was one of the recommendations of the Royal Commission into Institutionalised Responses to Child Sexual Abuse.

Construction on the $6.7 million project, located on the Acton Peninsula near the National Museum of Australia, will begin later this year now the Canberra National Memorials Committee has approved the design.

The winning design was selected by a nine-person jury comprising four people with lived experience and five design industry experts. It was chaired by Peter McClellan QC, chief royal commissioner of the royal commission.

Mr McCellan said he was pleased the representatives of victims and survivors of abuse who were members of the jury had warmly endorsed the design.

“The National Memorial will provide both a beautiful place for quiet reflection and an opportunity for deepening community understanding of the tragic consequences of abuse,” he said.

Minister for Families and Social Services Anne Ruston welcomed the outcome of the selection process and said she was pleased to share the memorial’s design with victims and survivors, their families, supporters and the greater community.

She said she recognised the memorial as a pivotal step towards healing for so many.

“The National Memorial will stand as a place of truth and reflection for people with lived experience and their families and supporters, as well as an enduring reminder of the responsibility to create a safer world for our children,” Ms Ruston said.

The royal commission handed down its final report -which made a total of 189 recommendations – in December 2017.

The Federal Government committed funding for the project in October last year.

The NCA is overseeing the design and construction of the memorial on behalf of the Department of Social Services (DSS), which is responsible for delivering the government’s commitment in response to the recommendation of the Royal Commission.

It’s an amazing looking structure. The money would be best going to the victims in a useful way though.

Could they not have spent $6.7 million helping victims, maybe with safe houses or mental health. I bet the designers are laughing all the way to the bank

Glass is bad for birds they tend to see themselves in it and try and attack.
or they don’t see it and smash into it.
The top of the arch is right over the middle of the path..
Birds will sit on top and poop all over the walkers

How will they be able to sit on it, if they can’t see it?

Like I have said on many posts about this. Why make a “memorial” for something that is still going on?

Does anyone else think, perhaps, the nearly $7m could have been spent elsewhere? Like, assisting the victims of childhood sexual abuse perhaps? I see this as a waste of resources and again, deafness and someone not reading the room

Manz Luxford I totally agree with you!

Manz Luxford absolutely. I get that the thought is there, but the money would help more if it was put into more counselling services and support etc.

As a victim, I would not be enticed to walk this walk and feel like I am supported. I would much rather see a building, staffed with quality counsellors, lawyers, nurses, doctors etc that can actually assist those now, and those still struggling with the past. This is just a token measure that does nothing

Jules Anne Agree the money should be used to support survivors. Whilst it is good that there is recognition of the trauma I am not sure survivors need to be reminded of it through a very expensive permanent memorial like this. Seems there could be a more constructive use of the money in this case.

Love the message of strength, fragility and resilience

I have to say, I’m not keen on the design. It’s a bit threatening looking. for the particular victims and survivors, I think something more peaceful and less dominating would be more appropriate

Janet Ilchef I agree – I also thought it looked a little intimidating towering over you like that.

Sylvia Doherty thanks – glad it’s not just me

Janet Ilchef i agree…looks very sterile and like a cage. Also don’t know how nice that’s going to look when the dusty canberra rain leaves water marks all over it.

Tijana Delov agree it looks like a cage. Not good design for victims imho. Too threatening

Agreed. A calm, peaceful and inviting place. This isn’t calming.