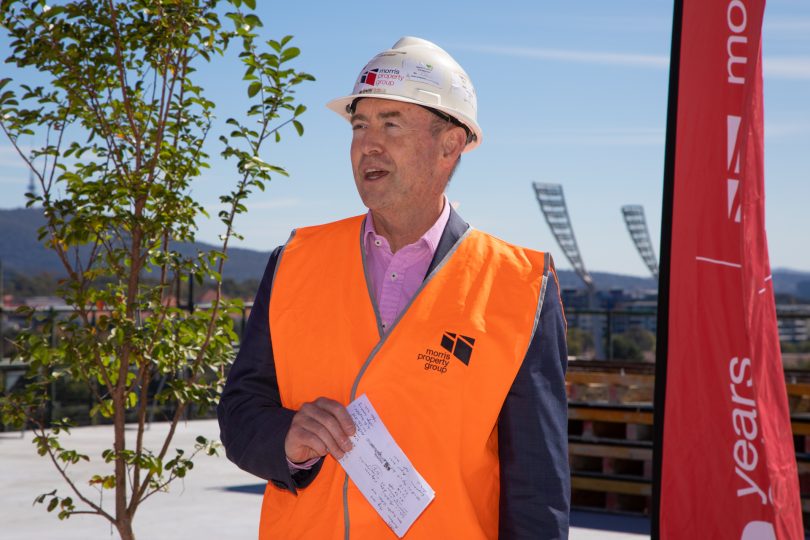 One of the ACT’s biggest developers has fired a broadside at the Government telling it to stop meddling in housing and let market forces shape the future of the sector.

Director of the Morris Property Group, Barry Morris, said instead of looking at build-to-rent projects the government should let the market do its work and instead focus on cutting rates, charges and land tax as NSW has done, to encourage the private sector to build more rental properties.

“Let the market sort it out – it will sort it out, because there is the demand, there is the appetite from the take-out end of the market with institutions,” said Mr Morris, whose company is developing its second build-to-rent project as part of the Renaissance development in Manuka.

“It’s only in its infancy at the moment, it will take a few years to pick it up. But the concept of here’s a build to rent, and industry should come in to buy 100 units doesn’t work from the background research we have done.”

Mr Morris said the market interest was there but investors needed critical mass to make projects economically viable and that meant developments of about 300 units.

The Renaissance build-to-rent project will be 282 buildings across six buildings on the largest block of the three available from its purchase of the former public housing land in 2019.

With other bricks and mortar investments such as shopping centres losing their sheen, the build-to-rent sector is being seen as a viable investment and Morris Property Group is looking to capitalise on that.

“We have had approaches from major commercial institutions who want to set up build-to-rent funds, but of course they’re looking for critical mass and it doesn’t work to just roll out one building here – they’re looking for portfolio spread and critical mass of 700 to 1000 units and that’s what we’re starting to put together as a future investment vehicle for those kinds of investors,” Mr Morris said.

The latest data from SQM Research shows the March vacancy rate at just 0.7 per cent with only 508 vacant dwellings.

“It’s an extraordinarily low statistic that will assure the rental prospect going forward,” he said.

“Where better to do it than a place in the middle of Canberra.”

Mr Morris said tenants were also looking for amenities that supported their lifestyle and not just a gym or pool.

He said this included home theatres and larger kitchen and dining areas that could be hired for special events.

“What people are looking for are those other amenities where they can live and entertain in their environment, but they can’t necessarily afford a 200 square metre unit, but what they can do is have their 80 square metre unit and have access to those amenities that enable them to have that lifestyle,” Mr Morris said.

The Renaissance development will include a child care centre and medical facility.

A spokesperson for Housing Minister Yvette Berry said the government was committed to growing the supply of rental stock, particularly affordable properties. Paxon Consulting Group had been engaged to prepare a study identifying the opportunities, challenges and implications for the Territory of build-to-rent developments.

“The study will provide information regarding what might be needed to enable build to rent in an ACT context, including how the delivery of this asset class could be more attractive to private developers, whilst reducing pressure on the rental housing market by providing a greater supply of rental housing,” the spokesperson said.

The study would also look at incentives to encourage build-to-rent options in the ACT.

I agree with the position of “…let market forces shape the future of the sector” and stop the developments. It is important also to change the rules of RZ1 and allow, as everywhere else in NSW to subdivide and build.
Too many protectionist policies create stress and don’t allow the native development of the market to shape the future of the sector and stops peoples’ planning for the future.

“…the government should let the market do its work and instead focus on cutting rates, charges and land tax as NSW has done…”

Not sure where in NSW annual rates are actually going down, but on the broader question of property-related taxation, if the property industry wants lighter taxation they might need to summon up some intestinal fortitude and start getting specific about where state and territory governments can make worthwhile savings in spending to allow for that. Property taxes are very important to state and territory budgets, so anything more than token reductions would have implications for spending.

The push for other jurisdictions to “follow the lead” (good luck with that) of the ACT and transition from stamp duty to annual land tax is really just re-jigging the problem and fiddling at the margins with the balance between winners and losers – this is inevitable unless there is an appreciable reduction in the longer term trajectory of property-related taxation.

Why is Morris always calling on the ACT Government to pour funds into areas where he is making millions and millions of dollars out of multi storey unit development?

It’s about time Morris put his hand in his own pocket not into ours.

There’s parts of Tuggeranong and Belco that haven’t seen a cent for two decades. He should do some development in the run down parts of these areas and that would actually make me listen to his calls for ACT Government funding.

Yeah, “let the market sort it out”. Right up until their profits start to dip and then they’ll be running to the government with their cap out begging for handouts.

I am not aware of any examples of the market sorting it out to provide housing for people on low incomes (other than slums) in the recent European history of the ACT, Australia, the Anglo world or Europe. It may have happened in same times and places, but the examples are hard to find.

Build to rent results in much better property maintenance than public housing or investor landlords.

Do you have evidence to support that assertion?

Contrast this with another current Riotact article, https://the-riotact.com/tired-manuka-needs-some-government-love-says-renaissance-developer/453942, and you can see where everyone stands. Developers want government (i.e. us) to pay for everything, while developers take their super-profits.

Nationalise the cost, privatise the profit. What a great lark this development business is.