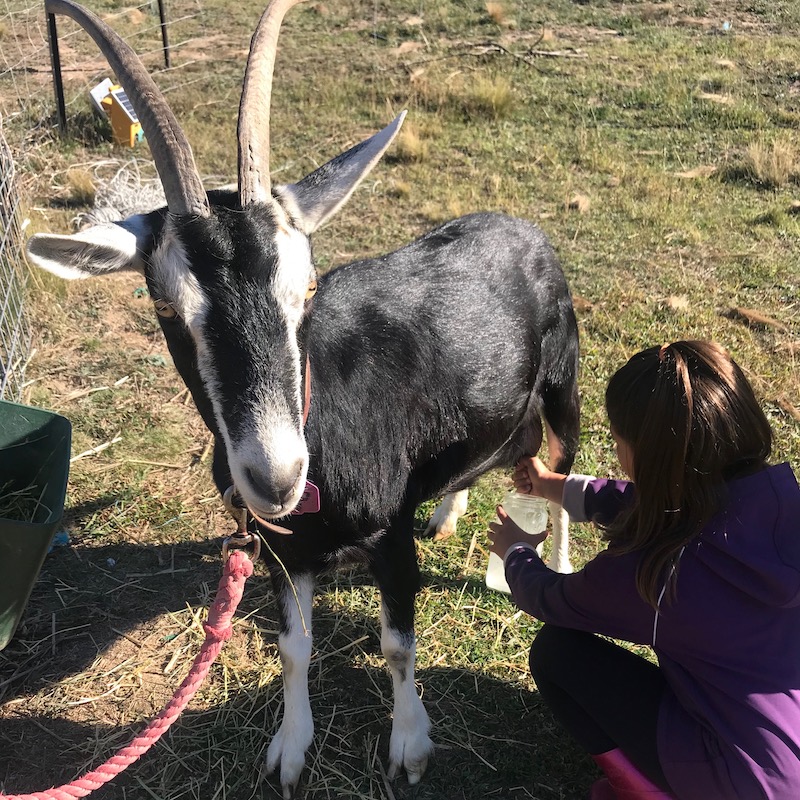 When she was a school girl in the historic city of Bologna in Italy’s north, a lonely patch of grass fired the imagination of Ilaria Catizone. Between her house and the bus stop, the grass seemed a lush oasis wedged among the paving and porticoes. “For some reason, I had this fantasy that it would be great to put a goat in that space,” Ilaria says. “Of course, it would have been the cruellest thing to do for the poor animal. But for me coming from a flat, one- square-metre of grass seemed like a great place for an animal.”

Completing university and leaving Italy in her 20s, Ilaria re-settled in Cook, Canberra, and with her partner later moved to a 30-acre farmlet at Bywong. Today she milks two of her four dairy goats, makes soap and cheese and shares her dream with plant scientist Damian Jaccoud and their two daughters.

They also have cats, roosters, a rabbit, peacock and seven llamas. “Every one of them, to the last animal have names. Only the bees don’t have names, because obviously that would be a bit of a challenge,” Ilaria says. “They are members of the family, we know them individually, we know their story, their ages.” Sunny, their resident wombat, visits most evenings for a feed. “We first met him when he was quite young and in bad health. We treated him in consultation with the local sanctuary, Possumwood. He is now doing well and still enjoys a pat. We treat him regularly against mange to make sure he doesn’t become victim of this horrible illness.

Established in 2011, their farm ‘Tatum Hills’ hosts educational tours, family groups, birthday parties, nursing homes and workshops on chicken-keeping, bread-making, cheese and soap-making. Their soap and other body care products, which are sold throughout Canberra, have milk or whey from goats, honey from their bees and herbs from their garden or friends’ gardens. 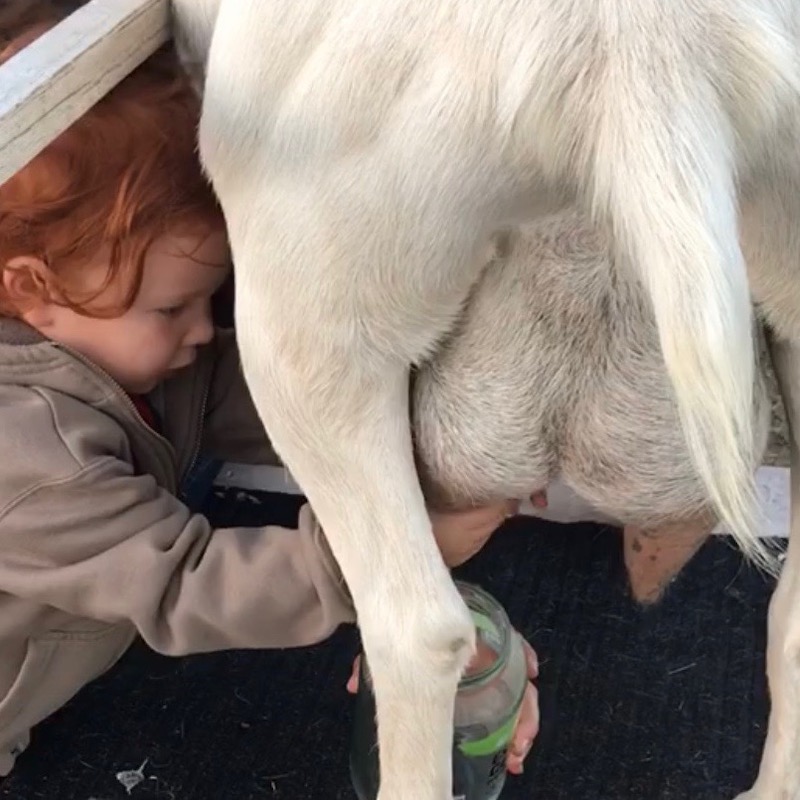 Audrey, aged three milking Tag. A fan of goat’s milk, Audrey will drink half a bottle soon after milking before it even gets to the house.

A science communicator, Ilaria draws on her experiences running children’s workshops for the CSIRO for the farm tours. “We decided to combine my background with our passion for doing things kindly to animals and the environment and to see how we go, and it has been fun.”

Investigating the most suitable livestock, they fell in love with sweet-natured llamas which are easy on fences, have soft-padded feet which do not compact the ground and take care not to run into people. “Four were born on the property, they have been handled from birth. They have that wow factor and add a bit of presence,” Ilaria says. “They’re an eco-friendly, beginner-friendly kind of animal, we thought they looked gorgeous.” Most weekends are busy with as much business as they can handle.

As city folk, they saw a farm as an idyllic place, with all the animals happily skipping about. “Unfortunately, the circle of life, whether natural or not, it is very much in your face all the time. So, you have the real exciting times, hatching chicks, and baby goats and all that, and then you have the dark side, such as the death of Lilly Pilly (a milking goat who died after delivering triplets and failing to pass the placenta) this summer, that was horrific. That was one of our worse setbacks ever,” Ilaria says.

“She was like the family dog, really close to us. She died despite all the efforts and the vets.’’ At times the farmlet seemed like snake central. One of their llamas died of snake bite. Damian has planted many hundreds of trees attempting to re-vegetate the property, only to lose large numbers to frosts, drought, or nibbling kangaroos, rabbits and wombats – and hungry goats.

Although they have established apple, pear and plum trees and bumper crops of tomatoes in summer, their time is stretched. “Between fixing any animal emergency we may have, which may result in death if we don’t fix it, or planting more tomatoes, you can imagine which one we normally go for – the poor veggie patch goes on to the backburner.”

The experience has taught Ilaria to stand back a little and allow nature to take its course. “I am Italian, I am very passionate about everything – ‘let’s do it’ – I must do everything head first,” Ilaria says. “But by living in Australia, and living on the land, sometimes taking a breath and watching things happen for a minute, and seeing where they are going on their own might be a better option.

“Sometimes things pan out better than you thought. Approaching animals with a different mindset, approaching them gently they respond with being much easier to handle,” Ilaria says.

For more information on Tatum Hills, visit their website.

Deref - 15 hours ago
It'd be handy to know the vaccination status of those in hospital and the ICU. View
Property 20

Futureproof - 16 hours ago
Vote early, vote often. Will voter ID solve this?... View
kenbehrens - 17 hours ago
Stephen, as it turns out, School ID cards are a thing, if you work in a school you'll need a Working with Vulnerable People's... View
franky22 - 21 hours ago
I take it that the 55 senators are part of the nutjobs still claiming that the election was stolen from Trump ? View
News 2

Frank Spencer - 16 hours ago
Leaf litter makes the best compost. View
TimboinOz - 17 hours ago
Leaf-litter!!! At home? Buy a 2 or 3 layer worm-farm and start gardening. Even if it's just for salads until Autumn. And, eve... View
News 3

Helen Roberts - 17 hours ago
I welcome FOGO in Cook. We are more able to separate food scraps. For example I have found that the coffee capsules we used t... View
Scott Harvey - 18 hours ago
Most people don't buy organically grown fruit and veg therefore the scraps aren't organic either. You cannot add non organic... View
Lifestyle 19