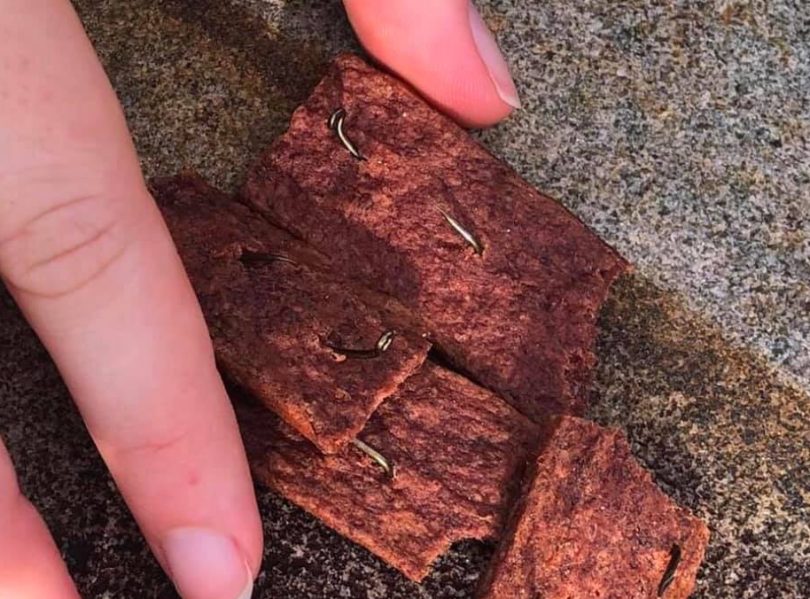 Dog treats with hooks in them were also found in NSW last week. Photos: Supplied.

A local dog owner has discovered dog treats laced with fish hooks in his own backyard and has warned the local community to search their own property for the dangerous treats.

“I just can’t believe how awful and truly sick some people can be to do something so bloody cruel and nasty to innocent animals.

“If you have a dog please be cautious and alert of your dog at all times and be aware of your surroundings and check out the areas in which your dog moves around in case they have possibly thrown the bait over.”

The news was shared widely across social media, with many Canberrans expressing their disdain and anger at the act.

RSPCA ACT chief Michelle Robertson said the incident is yet another example of appalling and senseless behaviour targeted at hurting an animal.

“Every week, we see animals at the RSPCA ACT who have either been let down or hurt by humans,” she told Region Media. “Fish hooks can become embedded in a pet’s mouth, food pipe or stomach and can cause extreme pain.

“If anyone suspects their pets may have swallowed or ingested a baited item, we encourage you to get in contact with your vet as soon as possible.”

Ms Robertson said RSPCA ACT has investigated a number of incidents of ‘baiting’ dogs, cats and possums this financial year and warned of the effect such actions have on the animal and the perpetrator themselves.

“Of course, our hope is that people would stop being cruel to animals altogether, but until such time, we remind the community that it is an offence to deliberately or recklessly poison a domestic or native animal, punishable by fines over $5000 and imprisonment for up to one year.”

Canberra and Queanbeyan Dog Watch, who shared the original post on their page, said the group had heard of a few similar cases before and said the group was created five years ago as a proactive response to reports of baiting.

A Transport Canberra and City Services spokesperson said Domestic Animal Services did not have information relating to further incidents of baiting in Gordon and urged concerned residents to contact ACT Policing.

Following the Facebook post, the spokesperson said Transport Canberra and City Services has advised the RSPCA and ACT Policing of the incident.

People who are cruel to animals should die! Now!

Illy Roumian - sickos out there

Feed the perpetrator what he/she left for the poor dog/s. How anyone can stoop so low, leaves you so angry!

No dog deserves this. Even the ones that drive their neighbours mad from barking or whatever. This is pure evil.

Bridie I forget where exactly you live but I do remember it is somewhere in the North Cooma area.

Vicki Brown We might have to come and dog sit when there is no one home.

Anne Virginia I know! It is a bit scary!

I'm impressed they found it before their dog did! This sicko needs to be found

What sort of low-life mongrel would put a fish hook inside some food and throw it to animals hoping they'll impale themselves? Oh, yeah - fishers. Fisher folk do that all the time.

Jeannie Robinson not sure about your words. 😡

My dog swollowed a fish hook left by a fisherman in the grass, horrible watching your dog vomiting trying to remove the hook, she couldn't it was stuck in the back of her throat.

She was stressed to the Max!!

Cannot condone such acts. Is their dog a habitual barker? What would bring someone to even think of doing that? Owner may need to consider all the facts and check with neighbours what happens when they're out. Could be sick payback. Just saying.

Steve- keep an extra eye on the babies k x

Cheers, this is messed up stuff😠

Who does these things what possess them karma will come back to bite them!!

Yeah it is Karen that there are people who do this

Heavs - 33 minutes ago
Two points; 1. It's a bus interchange with provision for light rail in the future. Saves doing a bunch of re-work at a later... View
Martin McMaster - 2 hours ago
I'll have one of each. Here is the delivery address https://www.google.com.au/maps/place/Parliament+Dr,+Capital+Hill+ACT+2600... View
2903Tuggers - 5 hours ago
All very interesting. But Westfield - sorry, Woden - is unlikely to see light rail before 2030. So there is plenty of time to... View
event 1

Trish O'Connor - 2 hours ago
is there a phone number to call each morning to check whether the balloons will be flying. View
Food & Wine 1

buttercup - 2 hours ago
Good on you Anna. Fresh ideas, reinventing yourself and your menu as the years roll by, delightful fresh food, and awesome cu... View
Community 17

Sonya Curran - 3 hours ago
I'd love to! Have never been! View
Mandy Pittman - 3 hours ago
Absolutely love Danny's bakery, everything is so yummy especially the hot cross buns but everything tastes wonderful and the... View
Rebecca June - 7 hours ago
Jacob Hollis will feed our child for a week View
Lifestyle 1

Conan of Cooma - 3 hours ago
I was an extra for the final scene in this movie. Leah is not only a bloody hilarious person but also an incredibly intense a... View
Food & Wine 71

Connie Senkoe - 5 hours ago
any body heard of Librafg with Nick Gibson. Is it a scam too? View
Community 24

Emily Vandenberg - 6 hours ago
Luke this looks interesting View
JS9 - 7 hours ago
Yawn. It has been shown time and time again that the overwhelming majority of 'charges' bought against the ABC by in general... View
Ashley Smith - 8 hours ago
Brett Lever he is aware... View
Community 1

keek - 7 hours ago
Yeah, I'll stick to teaching my kids that the internet is a playground, and nothing said on it is to be taken seriously. This... View
Sport 34

Benita Bittner - 8 hours ago
Louise had to keep up with you lol. View
Opinion 5

cockneyreject - 9 hours ago
Fair point. I don’t trust 4 Corners or the ABC either ... they are never balanced on anything (even the episode on China la... View
show more show less
*Results are based on activity within last 7 days

A 46-year-old Campbell woman has been charged with 23 fraud offences following the execution of a search warrant by ACT Policing this...
Community 24

A documentary made by a Batemans Bay filmmaker about keeping Australia's oldest show on the road is one of five...
Motoring 0

A documentary made by a Batemans Bay filmmaker about keeping Australia's oldest show on the road is one of five...
News 23

@The_RiotACT @The_RiotACT
Demand for houses continues to drive Canberra's record home prices as buyers deal with a fear of missing out and low advertised supply levels https://t.co/zRBETjcVtR (39 minutes ago)

@The_RiotACT @The_RiotACT
The developer of the problem-plagued Gungahlin pool has been absolved of liability for building defects as the government tries to secure a builder to rectify and reopen the facility as soon as possible https://t.co/8AO1kUihK8 (2 hours ago)

@The_RiotACT @The_RiotACT
Feel like you missed out on summer? Well, the @BOM_ACT's Autumn Outlook says there's no chance of a late burst of heat, with cool, wet conditions to continue https://t.co/FhKIkUIp7X (3 hours ago)