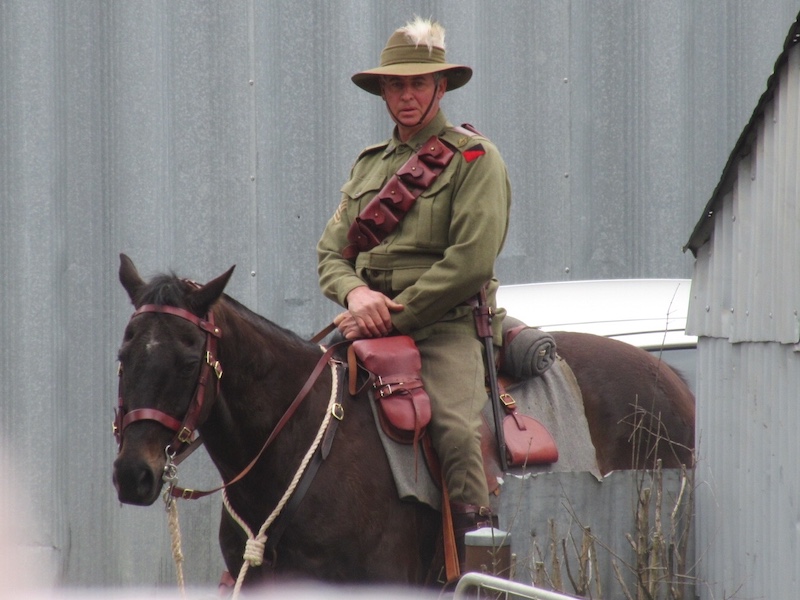 Harden- Murrumburrah is becoming nationally recognised as the birthplace of the 1stAustralian Light Horse muster in 1897.

The latest additions to the light horse memorial precinct, including the nation’s greatest war horse, ‘Bill the Bastard’ are being immortalised in bronze.

On the other side of town, another light horse legend from World War II is remembered with less fanfare. Simon Pavitt is building a hay shed, sowing oats and safeguarding the family’s story. Simon grazes 3000 Merino sheep, fattens cattle and keeps a few horses at “Gillen Gillen”, the 1450-acre property he bought from his parents. The horses have helped close the chapter on his uncle Ian Florance’s horror war experience.

In World War II at nearby Cootamundra, Ian Florance, then a teenage bank teller, joined the light horse, only to be later captured in Singapore. He worked on the notorious Thai-Burma railway until struck by malaria. A fellow prisoner-of-war and doctor, Sgt C Symes, warned that if he worked that day he would not return, he was so ill. The doctor cut the dog tags from a medical orderly who had just died and gave them to Ian, recruiting him as a replacement orderly.

“He put Ian’s tags in his pocket, and then hid them in a bottle of poison until after the war,” says Simon. Ian survived and returned to Australia a six-foot-two, six- stone man resembling a skeleton. He spent six months regaining his physical and mental strength, before taking his uncle’s advice and approached the Dean of Medicine at Sydney University to pursue a medical career.

Rejected, he later returned and revealed his war experiences as an orderly, Simon said. 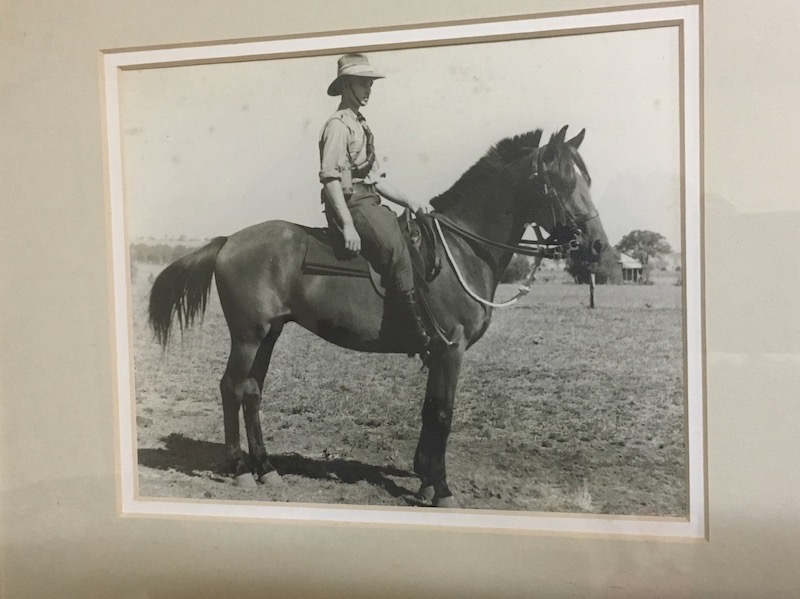 Ian Florance on his horse Tommy about 1937.

“They said, well, you have seen more operations and trauma than any of these doctors would ever see in a lifetime, and you are only 21. We will put you into third year of medicine.”

Graduating as Dr Ian Florance, the former POW opened a 24-hour surgery in Springwood in the Blue Mountains. Left infertile from malnutrition, his free time was spent travelling the world with his wife, Elizabeth. He shared the barest of details of his war experiences. In Springwood he became widely respected for his work ethic until his death in 2006.

“He owned a block of rough country near Orange, and I would go there jackarooing,” Simon said. “When we had a drink of whisky, every now and again he would let something slip. You would pick up little snippets, this got me a little bit interested in his history. I was reading books about Changi and Burma. I was sitting at the end of the table, I was 18 or 19 and asked if the name Dr Death meant anything to him.

“Well, the colour went out of his face. He left the table, I never saw him again for the rest of the evening. I took that as a yes. I didn’t ask any more questions ever again after that,” Simon said. Eventually, the light horse connection enabled him to learn more about his uncle.

For many years a keen polocrosse player, when Simon gave the sport away a friend in Harden suggested he join the local light horse troop, to continue his interest in horses.

He bought a black thoroughbred gelding, Snooze, which he was riding for an Anzac commemoration at Harden when photographed for a story which later was recognised by Ruth, daughter of Dr Symes – the doctor who saved Ian Florance’s life. She had been looking in vain for Ian’s family.

“I was holding Ian’s flag, one of the cherished things he owned as a POW in 1941, a red ensign,” Simon said. “The caption says Dr Ian Florance’s flag held by Simon Pavitt. That’s how she found my name. They had been through the Cootamundra phone book with no luck.”

Traumatised after the war, Dr Symes had struggled. His family had visited the Florance family soon after the war in Cootamundra, but then lost touch. Years later they sold their home in Maitland. A decade later, the home was again on the market when Ruth returned for a visit and pored over items in a garage sale in preparation of the home’s sale. Spotting a tobacco tin, she told the vendor she knew its contents – Ian Florance and Sgt Symes dog tags and a tiny watch which Ian had bought in Singapore. All were promptly handed over to a grateful daughter. 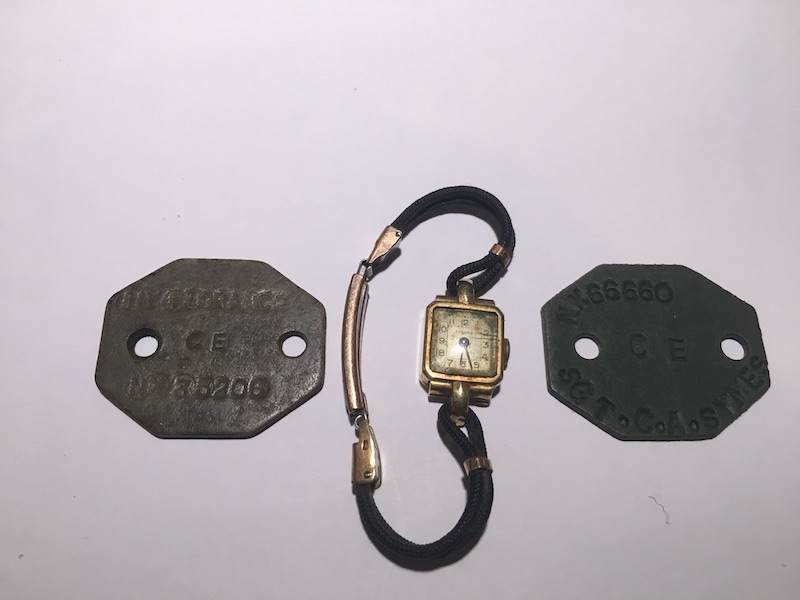 Dog tags belonging to Ian Florance and C Symes, and the watch given to the Symes family for keeping Ian alive.

Out of the blue in 2017, Ruth contacted the Pavitts and posted her father and Ian’s dog tags and the little watch to Simon.

Ian’s sister Margaret says he too was left traumatised after losing three close mates in the Muar River battle in the Malayan campaign. She suspects he was fearful of making friends but had helped Dr Symes. “Right up until the night Ian died, he was making house calls,” Margaret says.

Andrew Thomas somewhere to visit when you come over this way...some light horse battalion history.

Deref - 3 hours ago
It'd be handy to know the vaccination status of those in hospital and the ICU. View
Property 20

Futureproof - 4 hours ago
Vote early, vote often. Will voter ID solve this?... View
kenbehrens - 5 hours ago
Stephen, as it turns out, School ID cards are a thing, if you work in a school you'll need a Working with Vulnerable People's... View
franky22 - 9 hours ago
I take it that the 55 senators are part of the nutjobs still claiming that the election was stolen from Trump ? View
News 2

Frank Spencer - 4 hours ago
Leaf litter makes the best compost. View
TimboinOz - 5 hours ago
Leaf-litter!!! At home? Buy a 2 or 3 layer worm-farm and start gardening. Even if it's just for salads until Autumn. And, eve... View
News 3

Futureproof - 4 hours ago
The roundabout at Monaro Highway/Isabella Drive is particularly dangerous with the height of the grass. You should be able to... View
Capital Retro - 5 hours ago
That would be tantamount to the cosseted cyclists in Canberra who get free bike tracks and then complain that they can't use... View
bigred - 6 hours ago
Of course, both sides of politics could encourage interested and motivated residents to "adopt a patch" and reduce the total... View
News 1

Helen Roberts - 5 hours ago
I welcome FOGO in Cook. We are more able to separate food scraps. For example I have found that the coffee capsules we used t... View
Scott Harvey - 6 hours ago
Most people don't buy organically grown fruit and veg therefore the scraps aren't organic either. You cannot add non organic... View
Lifestyle 19

Tom Worthington - 7 hours ago
I was surprised that a generator would be used for the outdoor office. Having been the "Net Traveler", for more than two deca... View
News 3

@the_riotact @The_RiotACT
The ACT Government's moratorium on evictions for rent arrears for COVID-19 impacted households may have now ended, but a new $1000 grant will help provide relief to struggling tenants https://t.co/RCyFkkD2X6 (41 minutes ago)

@the_riotact @The_RiotACT
As long grass continues to be a bane of the existence of many Canberrans, the Opposition has called on the ACT Government to sort out a better, longer-term #mowing schedule and increase funding for what they see as a 'basic service' that's being neglected https://t.co/BLFgXaQEBW (2 hours ago)

@the_riotact @The_RiotACT
#Jerrabomberra residents have been waiting for a high school for decades, but will it be big enough when it opens its doors in 2023? Plans for the new school have been released and locals are concerned https://t.co/hrpMDRz4yg (3 hours ago)