A rendering of the proposed Dickson Interchange development from the DA.

Doma Group has reconfigured its plans for the northern part of its $160 million redevelopment of the Dickson Motor Registry site on Northbourne Avenue, adding commercial offices and changing the dwelling mix.

The Canberra developer has lodged a new development application with amendments to its original proposal for Block 19, Section 33, which consisted of two residential buildings in an interlocking L-shape formation with ground floor commercial tenancies including medical services, a mini-mart and food and retail outlet; two levels of basement parking and a laneway to the north of the site.

Doma now proposes four separate buildings, two residential and two commercial, with the number of units reduced from 249 to 190. The DA says this break-up of the footprint allows for pedestrian pathways through the entire site.

Building levels have been reduced slightly, with the two central commercial and office buildings now six levels, instead of seven. The residential buildings, including one fronting Northbourne Avenue, remain at eight storeys and 25 metres high.

The residential buildings will now consist of 81 one-bedroom, 82 two-bedroom and 27 three-bedroom units, including 19 adaptive units. The number of basement parking spaces is reduced to 272 from the original 415. 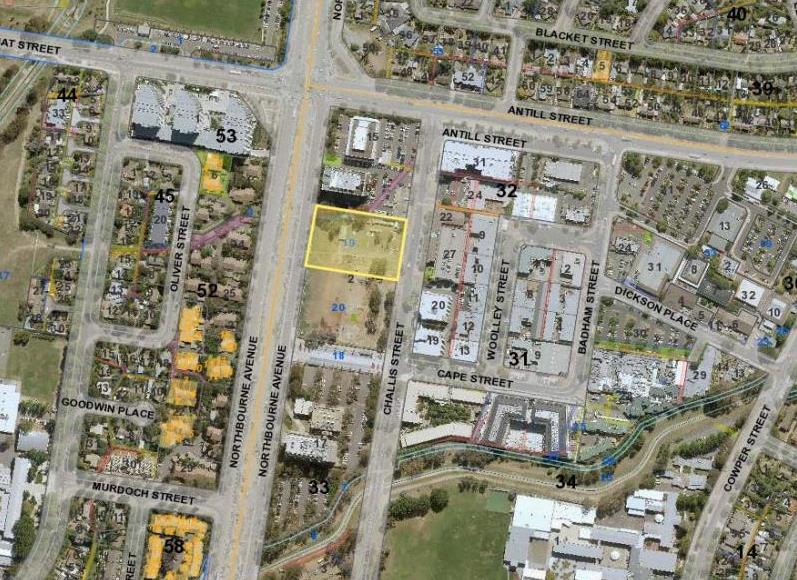 An aerial view of the site.

A gym replaces the central courtyard at first-floor level, with a non-trafficable green roof above the gym at second-floor level, and to the west of the gym. A roof terrace is now proposed above level six for the southern commercial building.

A central laneway with two storeys of commercial use has been added to access ground floor eateries and cafés, and first floor offices.

The entrance to the residential lobby has been moved from the south to Northbourne Avenue, and there is a new Northbourne access to the proposed pharmacy.

The DA also includes a range of new building signs.

The site, between Northbourne Avenue and Challis Street, is currently a car park. Doma won the right to develop the site in 2017.