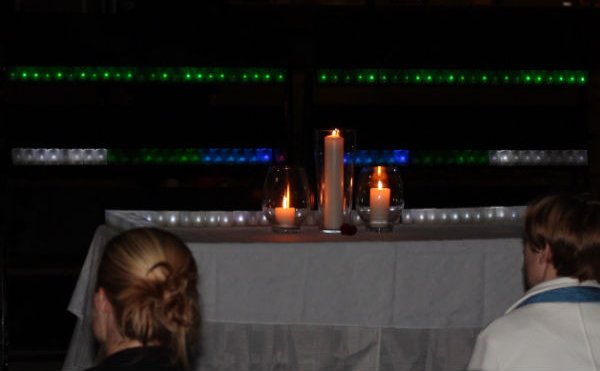 The Candle Lighting Ceremony hosted in Canberra by the Domestic Violence Crisis Service (DVCS) was held last night. The National Candle Lighting Ceremony, held on the first Wednesday of May each year, is in remembrance of those who have died and also acknowledging the profound impact each of these deaths have on thos left behind. In Australia, more than 100 women, children and men die each year directly because of domestic violence.

There were the the usual speakers – Minister Andrew Barr, Ms Mirjana Wilson, Executive Director of the DVCS, Dr Sue Packer – Mr Greg Turkich played the bagpipes and the usual assortment of members from the community and public sector were in attendance. It was good to see a strong representation from the local police, who are often called on to deal with the tragedy of domestic violence.

The focus of the event were the candles and the roses:

— 3 large candles symbolising the national vigils that occur all over Australia to remember the women, children and men who have died as a result of domestic violence;

— the red roses, which are now associated with domestic violence campaigns across Australia. The red rose is a particularly powerful symbol as it is the flower most often given to women to signify love and affection, but also associated with mourning.

The tea candles represent former clients of the ACT DVCS:

— 63 green candles for the women who have died;

— 12 blue candles for the men who have died;

— 2 amber candles for the children who have died; and

— 129 white candles for the children who are now without a mother as a result of domestic violence.

All we can hope is that no new candles need to be added for next year’s Day of Remembrance. 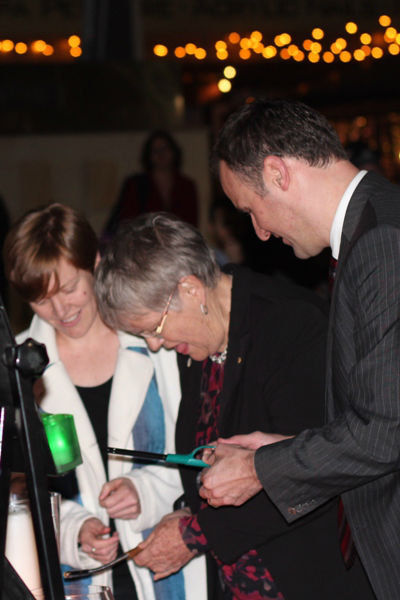 Congratulations for acknowledging the men who are victims. One in three victims of DV are male. I can’t say enough how mature and considerate this is, given the historical ignorance towards male victims. Well done to everyone involved. Domestic violence is a scourge from which men, women and children collectively protected.

Suz 'olmes - 55 minutes ago
How about something nice? Invest some money to clean up the tavern and make it more family friendly or a space for cafes. No... View
Jenny Keeley - 3 hours ago
I already have 3 McDonald less than 10 minutes from my house. Put something else there, anything else! View
Chris Goodrum - 9 hours ago
Many Happy New Years Eve’s spent there, met my partner there many many years ago! It should be heritage listed not knocked... View
News 19

Julie Macklin - 2 hours ago
And that is the most constructive comment you could come up with 😂 View
Warwick Alsop - 4 hours ago
Gotta love those NIMBYs View
Marea Fatseas - 7 hours ago
Who said the proposed facilities in Fyshwick are “going green”? How is CRS recycling just 5 percent for local use, export... View
Breaking 1

Yuri Shukost - 6 hours ago
Barr will find any reason not to build a new stadium or renovate the existing one. I suspect he’d find the money if it affe... View
Fred Pilcher - 7 hours ago
Good news. Sanity prevails. View
Ben Jones - 10 hours ago
Tom Allen where is this mythical stadium ? View
News 22

Chris Endrey - 10 hours ago
Who is most immune to hardship, who is pampered most, living the life that even the Gods would envy? The answer, clearly, is... View
Spiral - 10 hours ago
"But that is, of course, not true – our society chooses to devalue the arts because the focus of all of our energies is mon... View
Acton - 12 hours ago
Many, if not most in the arts community have long shown utter contempt for us in the broader community and made a living out... View
News 15

viking princess - 1 day ago
Very happy to say I can see myself and two of my children in that opening day photo. Congratulations on your success Manuel,... View
Food & Wine 10

Lauren Kay - 1 day ago
Ves take note for your next visit. View
show more show less
*Results are based on activity within last 7 days

@The_RiotACT @The_RiotACT
Interested in purchasing a home through the land rent scheme? Check out this beautiful four-bedroom home for sale in Moncrieff https://t.co/C8dibvyzPU (54 minutes ago)

@The_RiotACT @The_RiotACT
Hungry for a nature fix in your own backyard? From tomorrow, the ACT Government is waiving entry fees to Tidbinbilla Nature Reserve until the end of 2020. The koala enclosure has been upgraded and being late winter, you might even spot a platypus https://t.co/NDT7TRJofV (3 hours ago)