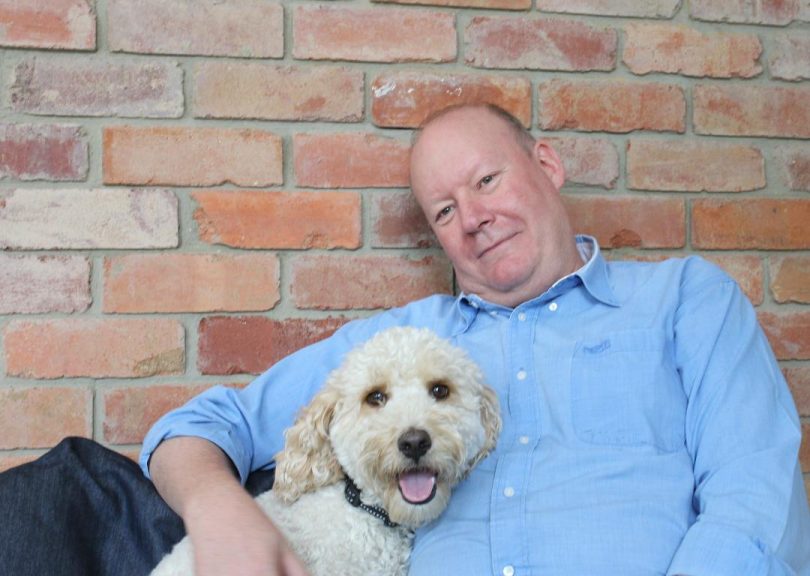 Independent Dr Jamie Christie and four-legged friend have been campaigning hard for the new seat of Bean. Photo: Supplied.

He may not necessarily be elected as the next Member for Bean, but independent Dr Jamie Christie surely gets the prize as the candidate who has travelled furthest for his campaign. By an electoral quirk, the division of Bean includes Norfolk Island, and besides spending a lot of time in Tuggeranong, he’s also hopped across to the other Kingston foreshore.

“I just thought I should,” he says with an almost audible shrug. He found the Norfolk locals still palpably furious about losing their autonomy (and presumably slightly bemused at meeting a campaigning Canberran independent).

But the motivation typifies Christie’s campaign, which he says is driven by feelings somewhere between “I’m mad as hell” and “surely someone could do a better job than this”. With longstanding rural roots, he was outraged by the government response to the Murray Darling crisis this summer.

“The response was almost ‘get used to it’. I was irritated that politicians could react that way, I looked at the available candidates and I felt I could provide an alternative so I decided to hoist a flag and see what happened,” he says.

He is also a longtime Canberra local whose grandfather moved here in 1927, and whose childhood was spent yabbying at Angle Crossing, camping along Paddy’s River, barbecuing at Pine Island, and being hassled by the emus on school excursions to Tidbinbilla.

Christie resigned from his job as an emergency ward doctor in April and has been campaigning fulltime. He believes the party system is “fractured and fractious”. But he’s heartened by experiences like the woman who stopped his shopping centre spiel, telling him it was enough he was an independent, and the long list of friends, colleagues and strangers who provided the requisite 100 signatures for him to stand.

Christie believes the party system is essentially a facade of unity for squabbling members whose allegiance to the system prevents them from brokering pragmatic solutions for their constituents.

He’s paid for his own campaign, throwing in a bequest from a family member after deciding with his partner they were prepared to take the risk.

He’s found local Tuggeranong people (if not the Norfolk Islanders) concerned about security and gang violence, divided on anti-consorting laws and especially worried about transport. Christie puts that down to the expenditure of public money on light rail “that seems to have been taken without engagement with constituent needs”.

But surely, once again, these are all local issues, not Federal? Christie agrees but says “I would argue that the role is advocacy for the ACT’s needs. Where infrastructure spending is concerned, for example, the ACT government is substantially dependent on Federal grants. I think many Canberrans feel disempowered, and that there is no effective advocacy.”

Christie said the robo-debt dramas also angered him because “we’ve drifted a long way from a government providing services when it acknowledges sending out incorrect debtor notices at a rate of 20 per cent”. He’s also a firm believer in the need to decarbonise our economy.

“My role as an independent is to support the voice of the community, to ask first what would the electorate want?”.

When he began campaigning, he had “no idea” what his chance was of being elected. But curiously the growing loss and destruction of his campaign corflutes is starting to convince him that he’s being taken seriously by other contenders.

“It’s quite a lot of effort to go and demolish my corflutes. At the start, nobody bothered them. Then, they were being run over with four-wheel drives by the look of the tyre marks.

“Now they’re being stolen, my guess is at least 20 per cent of them have been nicked. That level of disruption is usually limited to one of the major parties, so the only reason anyone would do that is they’ve decided I’m some kind of threat.”

“I’m a very small campaign and in some ways, I have no idea what I’m doing,” Christie says wryly. “But if we can engender some change around political processes, that will be a positive outcome.”

It is really important to give independent candidates your 1st preference vote.

Sure they probably won't have a chance but a first preference makes a difference for future election funding should they stand again. Otherwise the major parties get all the public funding and no-one can contest against them.

He's got my vote.

I'm not in that electorate but I saw your corflutes and think you would be an excellent candidate. ED makes for a sensibly pragmatic approach to policy formation much lacking in politics.

Sounds good to me. I am moving away from the majors this election and was looking for an independent who isn't butted up with the majors.

I like this guy based solely on what I’ve read in the article. If I lived in the ACT, I’d vote for you because you bring a fresh perspective and determination to actually represent the people who vote for you. Best of luck!

I hope James get elected. He is a great guy and would be a fantastic representative for Canberra.

Good luck to Dr Christie. Sounds like a decent bloke. Have already prepolled and, at the time, did not feel i had enough info to sway my vote his way. There was someone handing out his HTV cards at the woden prepoll - congrats on managing that as an independent.

having worked with him, can confirm he is a top bloke!

Good luck; hope you can do best as an independent.

@The_RiotACT @The_RiotACT
Access Recycling is reassessing its future in Fyshwick and may move to Goulburn in the wake of legislation blocking its proposal https://t.co/e59RVT1RYZ (34 minutes ago)