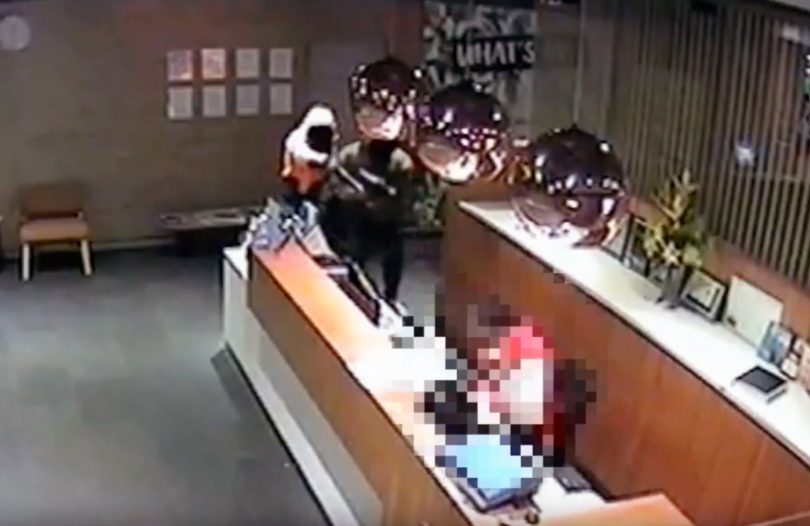 Two armed robbers held up staff members at gunpoint and stole money from the Lanyon Vikings Club in Conder last Monday night – the second robbery of the club in four months.

CCTV footage released by ACT Policing (shown below) reveals details of the dramatic incident where two staff members are forced with guns to their backs to assist the robbers in accessing the club safe.

One staff member, who looks to be a woman, is forced to open the safe and hand over items to the robbers.

ACT Policing reports that a sum of money and cash canisters were stolen from the club during the robbery, which took place at 11.30 pm last Monday night (October 2).

The robbers left the club via the rear smoker’s balcony in an unknown direction.

This is the second robbery of the Lanyon Vikings Club in the last four months, with two men armed with a modified nail gun and knife stealing cash from the club on June 11.

There have also been several other armed robberies of Canberra clubs in recent times, including the armed robbery of the Raiders Belconnen Club in Holt on August 21. ACT Criminal Investigations last month established a dedicated armed robbery team at Winchester Police Station to investigate current and historical armed robberies.

The two armed men who committed Monday night’s robbery are both described as being of medium height. As can be seen from the CCTV footage, one man was wearing a blue and orange hooded zip-up jumper and wore black-and-grey gloves and blue-green pants.

The other robber was wearing a brown-green hooded jacket, with black pants and red gloves.

During the robbery, both men had their faces covered by black material.

Police are seeking witnesses to the robbery. Anyone who has any information that could assist police is urged to contact Crime Stoppers on 1800 333 000 or via the Crime Stoppers ACT website. Please quote reference 6159811 and information can be provided anonymously. Below is the CCTV footage.

HiddenDragon - 7 hours ago
Much of the progressive agenda being pursued by the ACT government is fairly standard stuff - not just the ideas, but the arg... View
Ray Polglaze - 15 hours ago
Martyn Tweedie, And so what would your view be of the Federal Labor Party in December 1968? What would the evidence show? By... View
Martyn Tweedie - 16 hours ago
Ray Polglaze my sincerest apologies. "Re-elected" then. View
Food & Wine 19

Man attacked with baseball bat and robbed in Glebe Park