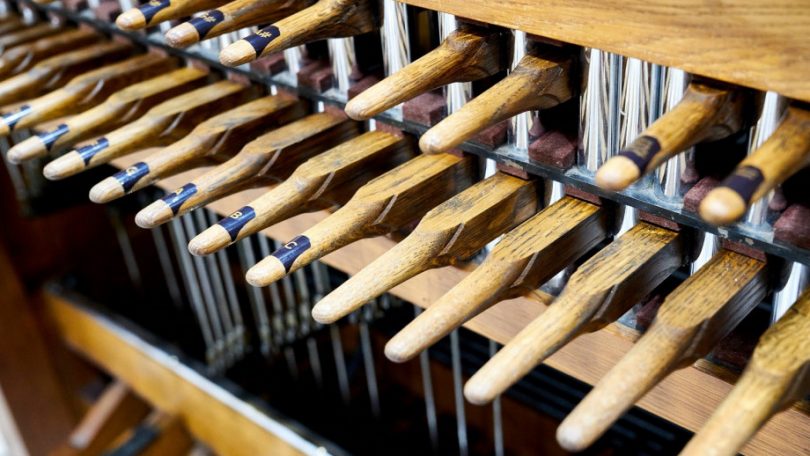 The reinvented clavier at the Canberra Centre. Photo: Supplied, ANU.

The Canberra Centre has chimed in on the vibes of Christmas by letting visitors play a redesigned keyboard that mimics the National Carillon’s old clavier.

Australian National University researcher Dr Charles Martin has combined the power of music and computer science to recreate the instrument that may or may not spread Christmas joy in the Canberra Centre for festive shoppers to try.

Dr Martin, an expert in musical AI-based technology at the ANU’s College of Engineering and Computer Science, programmed the National Carillon’s old clavier’s batons, or keys, with synchronised sounds that mimic the original bells of the carillon, as well as to play three Christmas carols.

Visitors to the Canberra Centre can play the redesigned instrument.

“This installation really demonstrates how the National Carillon is controlled by musicians and is actually a huge city-scale musical instrument!” Dr Martin says.

“People can try it out and know what it feels like for the carillonists who perform for us.”

Dr Thomas Laue, a senior carillonist and a lecturer at the ANU School of Music, called on Dr Martin to help.

However, for the carol of the bells to reach our Canberra doorsteps, it required a team larger than Dr Martin, with various fields of expertise.

“I worked with the NCA’s carillon technician, Terry McGee, and another colleague, Dr Alistair Riddell, to design a sensor system that could be added to the clavier so it could be removed without damage,” Dr Martin says.

Working as hard as Santa’s elves the night before Christmas, Dr Martin brought the new and unique instrument to life.

“I got to jump in at the last minute and code up the synthesised sounds. The moment we finally could press the clavier batons and hear authentic carillon bell sounds, and start to experiment with playing some music, was just exhilarating.”

Combining music and computer science has been a passion for Dr Martin and the focus of his research.

“I’ve always been interested in music and technology separately, but I’m captivated by the process of creating new expressive musical instruments with computers,” he says.

“Music technology is a field where I have felt able to create experiences that are genuinely new and can impact a broad variety of people.”

The reimagined carillon is at the Canberra Centre, first floor, near the Myer entrance, until 6 January 2020.