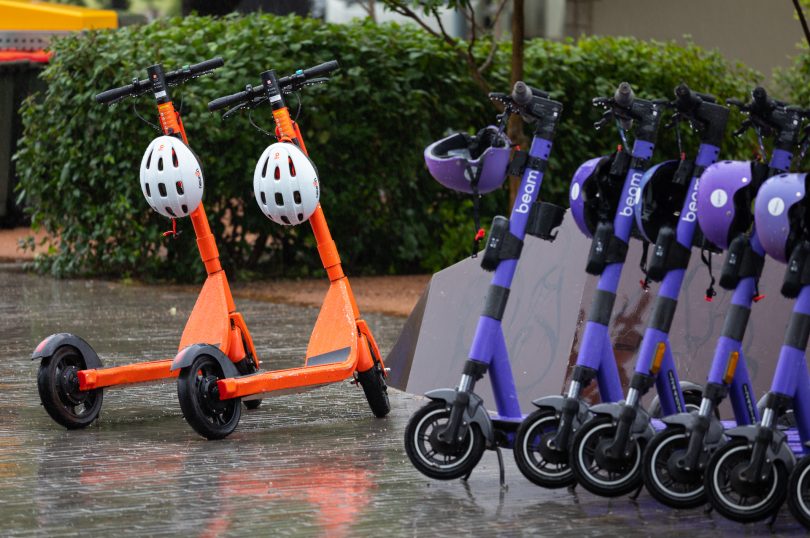 The ACT Government is considering putting in blocks and curfews to combat scootering under the influence. Photo: Michelle Kroll.

Jumping onto an e-scooter to get home after a big night in the city could become more difficult under potential new rules designed to combat scootering under the influence.

Time curfews and no-go zones outside popular nightspots where there is a high risk of someone being intoxicated are both options being considered by the ACT Government.

Transport officials told an annual reports hearing last Friday that the idea wouldn’t be to stop people from using an e-scooter but to “remove the temptation” for somebody who would be potentially better off getting a cab.

A Transport Canberra and City Services Directorate executive branch manager John Bowdery said if any curfews were imposed they would be highly targeted.

“There’s potential consideration … as an example to prevent someone starting a trip directly outside of Mooseheads late on a Friday night where there’s a high chance somebody might be intoxicated,” Mr Bowdery said.

Last year, the government introduced harsh drink-riding laws into the Legislative Assembly which will be debated later this year along with a range of other amendments to the Territory’s road transport legislation.

If passed, anyone caught riding an e-scooter under the influence of alcohol or drugs could be slapped with a $3200 fine.

A three-strikes-and-you’re-out rule will be implemented, which was a key recommendation of an earlier review into the e-scooter scheme.

The review found most Canberrans are happy and would like to see the e-scooters arrive in their neighbourhood – although there were some safety concerns.

Under the rules, multiple acts of non-compliance such as not wearing a helmet or parking incorrectly could lead to a user’s account being cancelled.

Any serious misconduct will be referred to ACT Policing.

The ACT Government also introduced legislation last year that allowed police to direct a person to either get off, or not get on, a personal mobility device.

The introduction of the new legislation comes before the expansion of the e-scooter scheme later this year.

The first phase will connect the two current zones of the city centre and Belconnen.

The scheme will then roll out to Woden and Gungahlin, before areas such as Tuggeranong, Weston Creek and Molonglo Valley.

It’s hoped all of Canberra’s major town centres can be connected through a shared path network so riders can be kept off major arterial roads.

Mr Bowdery said Transport Canberra is also working with local community groups and key stakeholders to ensure the expansion of the scheme goes smoothly and to “identify any issues”.

“The key issue for the rollout will be repeating that engagement with local community areas, finding out where there are any issues, avoiding potential challenges such as funnelling these devices onto main arterial roads where we don’t want them,” he said.

Both e-scooter operators, Neuron Mobility and Beam, have welcomed the opportunity to expand their services across Canberra.

I’ve been almost knocked over by crazy scooter riders a couple of times now- on footpaths etc. They really need to have their use restricted whether drunk or not!

Quick let’s find something to complain about….

Ah yes – we can’t have people enjoying themselves

What’s the difference here compared to banning driving home from the city at night because some number of those people might be drunk driving? Is there some evidence that it’s near 100% of people and that they’re killing others in the process?

How many new laws have we added. How many are actually enforced.

Typical left governments tend to pick and choose which of the arbitrary laws they enforce rather than having solid cover all laws.

The scooters are a terrible eyesore that have to painted bright colours otherwise people trip over them.
They also are ridden by people that make them into a traffic hazard. No doubt have caused many accidents, collected in studies and then ignored. We only ever hear about the successful studies.

The recent changes to the bike rider laws have caused many more accidents yet, those pilots just end up being rubber stamped.

Instead of no go zones why not have scooter paths or do go zones.

The idea of a curfew is very old, stopping an electric bike is dangerous to those who expect it for tansport and miss the cutoff.

I love the false pretentious bargaining:
“It’s hoped all of Canberra’s major town centres can be connected through a shared path network so riders can be kept off major arterial roads.”
Google translate comes up with:
“We’re going to spend money on this to show how awesome we want to invest in these startups because these are the real people we want in Canberra and if you didn’t want us to spend money we’ll just let them loose on the roads.”

However we all know the last part will come true at a later date. we’ll start having scooter / bike lanes next to all the major roads in the town centres.

Program the scooters with an unlock test that operates after, e.g. 9pm, which most people cant do when drunk, e.g. a difficult sudoku, correctly reciting the national anthem, or listing five virtues of the prime minister.

As Renea says it’s irresponsible to advocate using them as a mode of transport after a night on the turps. It’s still an offence.

Pet theory: One day the government will have override control for electric vehicles too (but not until after the vast majority of drivers have made the switch).

Surely natural selection will sort the problem out in time…

This will only increase the likelihood of people choosing to drink drive instead. I would rather people ride an E-scooter drunk than get behind the wheel, at least their only a risk to themselves that way. Is there even a significant issue with drug and alcohol affected E-scooter riders or is this just a handy grab at more revenue by the ACT gov?

You can get booked by police for being DUI on them regardless. A mate of mine once got done on a bicycle, you can also get done riding a horse while impaired.

The only effective curfew would be from 1st January to 31st December, each year.

It is ludicrous to think that booze busses will be out in the early hours to catch the ratbags riding these infernal, virtue signaling deathtraps.

When is the government going to admit that they are folly and ban them permanently?

It’s a bit like when a politician reduces Covid restrictions and says we’re encouraging people to take “Personal Responsibility”.

You can be “responsible” but if others aren’t, your own “responsibility” counts for nothing.

E-scooters by their nature attract risk-takers. Hospital admissions confirm this. Yet, the Government allows and encourages them to flourish, but, with the threat of large fines, that’ll never be collected.

How many people have been fined $750 for smoking at a bus stop, since that legislation was introduced? Based on discarded butts, I’m guessing none? What about the $500 fine for dropping that butt? I’m guessing none again? I see people smoking at bus stops everyday. I then get on the bus and see people not wearing masks.
Who is enforcing the $200 fine?

So fines for E-scooters?

I agree with CR. These things are dangerous, not only to the rider but anyone who shares the footpaths with them. Reduce their speed to 10kph and put blood alcohol sensors on the E-scooters and maybe I’ll support them.

You’re pretty quick to ban a vehicle that doesn’t kill 1100 people a year and hospitalise 40,000 in Australia alone.

What are the real deathtraps?

The Luddite Brigade is here in force!

There are over 20 million registered cars on Australian roads.

How many unregistered scooters are “all over the place” in Canberra?

You may wish to review that comment after you trip over one or you are run down and maimed.

I express opinions based on facts and actual experiences that are difficult for some people to accept.