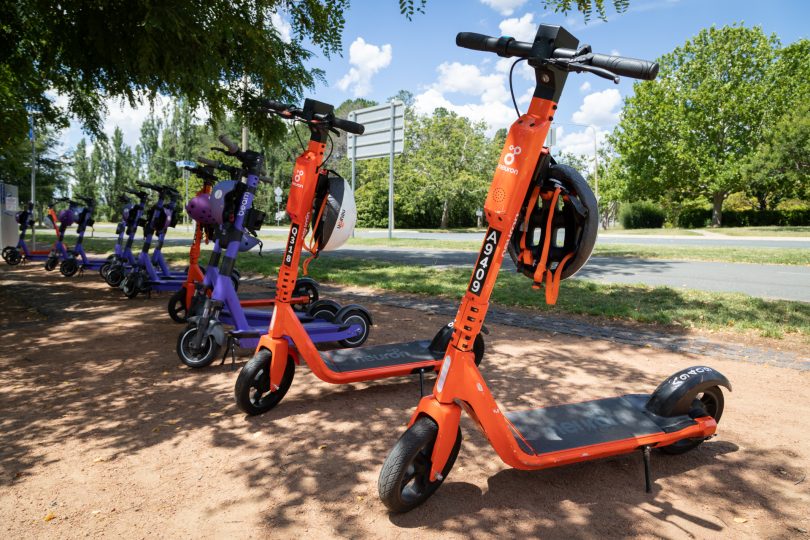 E-Scooters: coming soon to a town centre near you. Photo: Michelle Kroll.

They’re the orange and purple machines that caused quite a stir when they first hit Canberra’s streets over a year ago, and they could be soon arriving in your neighbourhood.

Following recent positive community feedback, the ACT Government is now exploring how a phased expansion of the e-scooter scheme could take place throughout 2022.

Minister for Transport and City Services Chris Steel said many Canberrans had expressed a desire to see the e-scooters in more town centres, although he did acknowledge there are some community concerns around the safety of the machines and the behaviour of some riders.

He said stricter rules designed to increase compliance and safety will come into force as the scheme expands.

Currently geofenced to only operate in central Canberra and Belconnen, a first phase would seek to connect these two zones before rolling out to Woden and Gungahlin.

Areas such as Tuggeranong, Weston Creek, West Belconnen and the Molonglo Valley will be added later. 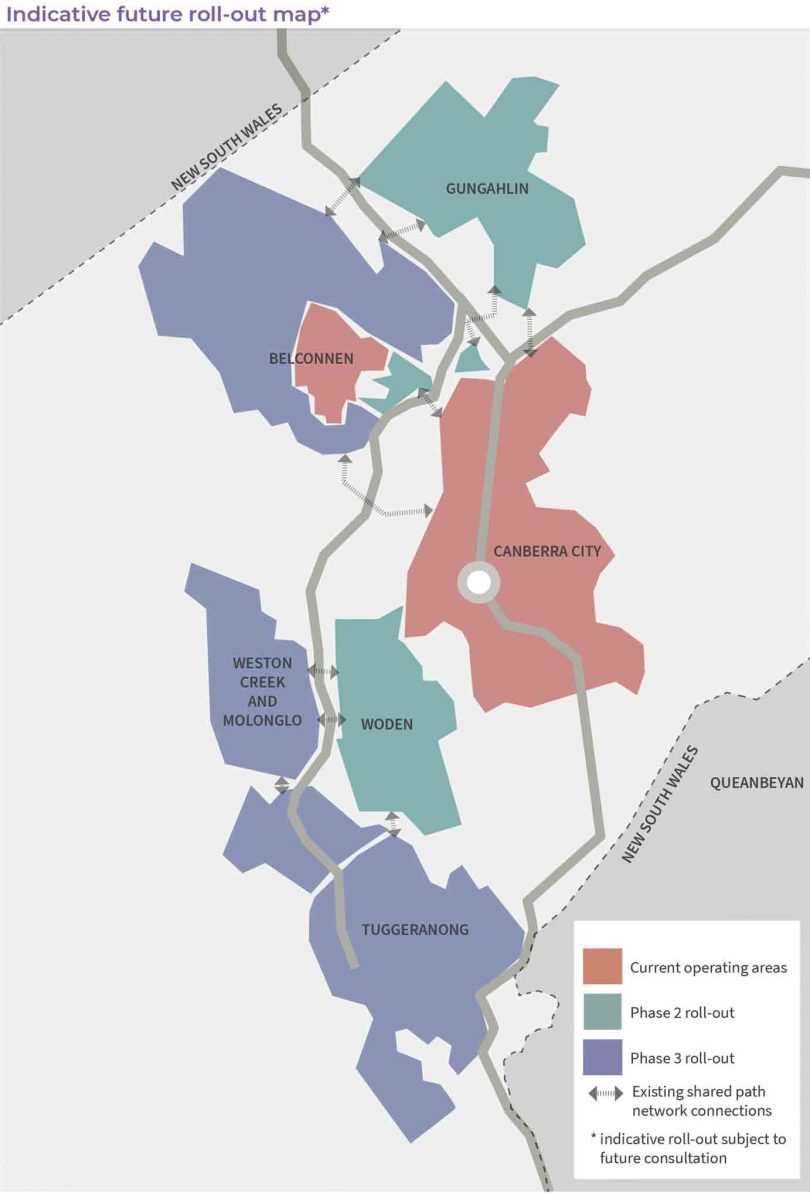 The proposed future roll-out of the e-scooters. Image: ACT Government.

It’s hoped planning and geofencing work undertaken by the ACT Government and the two e-scooter operators – Beam and Neuron – will mean all of Canberra’s town centres can be connected through a shared path network so riders will not be obliged to take major arterial roads on their journey.

In response to the independent review undertaken, the government noted that although current e-scooter trips are mostly between one and two kilometres, this could change as the scheme expands and riders choose to use them for longer trips.

Mr Steel also acknowledged that some in the community do have concerns over the safety of the e-scooters and hopes to introduce tighter regulations for e-scooter riders to combat this.

He said the government will implement a three-strikes rule – a key recommendation of the scheme’s review – under which multiple acts of non-compliance like parking incorrectly or not wearing a helmet could lead to a user’s account being cancelled.

Under the model, any repetitious inappropriate conduct or act that poses an immediate or serious risk to the public or property will be referred to ACT Policing.

“The government will be looking at how we can provide safe designated parking areas for e-scooters, improve geo-fenced ‘no-go’ and ‘low speed’ zones to promote safe use, and we intend to legislate to address unsafe practices like drink riding,” Mr Steel added.

Both e-scooter companies – Neuron and Beam – welcomed the news.

A spokesperson for Neuron said the company will “continue to support the ACT Government as it expands the service, and aim to integrate into the wider transport network as best as possible, providing more Canberrans with a safe, efficient and environmentally friendly mode of transport.”

The spokesperson also noted the company’s focus on safety, saying it is their top priority. In May, they introduced third-party liability insurance for their e-scooters and e-bikes.

“We acknowledge that there is always more we can do, however, in educating Canberrans on safe e-scooter riding,” Mr Cooper said.

“Beam currently employs progressive rider education and warnings to riders in response to community feedback about bad riding or parking, but plans to introduce new technology in the coming months to further support pedestrian and rider safety.”

“Mr Steel also acknowledged that some in the community do have concerns over the safety of the e-scooters and hopes to introduce tighter regulations for e-scooter riders to combat this”.

Minister, people are concerned because of the numbers of injuries.

Do your regulations to outlaw smoking at a public transport station or bus stop work?

Minister, sure you can tighten regulations but rather than “hope”, how about you actually “enforce” your regulations?

“Areas such as Tuggeranong, Weston Creek, West Belconnen and the Molonglo Valley will be added later.”

No rush for them to come to Tuggeranong. The lake down here has enough pollution it it already.

Awesome! I use them all the time when I’m in the inner north/south. Cant wait for them to be in my area!

I’d like to know when Beam and Neuron will start collecting these scooters for their nightly re-charge in a battery powered van?

A pox on them! They are a blight in Civic and they want to spread them elsewhere?