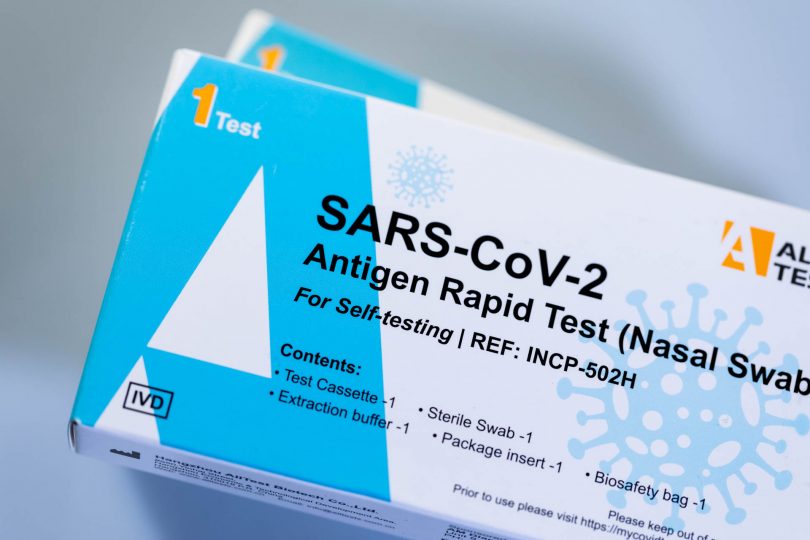 The Education Union is disappointed with the lack of clarity around the ACT’s return-to-school plan. Photo: Michelle Kroll.

The education union has expressed concerns about the inadequate supply of rapid antigen tests in the wake of the ACT Government releasing its highly anticipated COVIID-safe back-to-school plan.

While the government intends to supply rapid antigen tests to all school students, teachers, educators and school-based staff across the ACT, it has been unable to secure supplies before the first day of term one.

There will not be a compulsory surveillance testing regime in place, with parents instead advised to test children if they are in contact with other cases or are symptomatic.

According to the ACT Government, RATs will be available for contactless pick-up at schools by the end of week one, but Australian Education Union (AEU) ACT Branch Secretary Patrick Judge said this simply isn’t good enough.

“With a health monitoring regime in place, school could have started with confidence that those who were attending on day one were COVID-19 negative,” Mr Judge said.

“Instead, we will be facing the potential chaos of a wave of infections right at the beginning of a new school year.”

Mr Judge said the AEU had called for health monitoring through rapid antigen tests as part of any return to on-campus schooling. He described RATs as “a pragmatic measure in the context of a significant drop in cases”.

“This measure would have maximised learning opportunities while taking steps to ensure that transmission of COVID-19 in schools is limited by early identification of infections.”

Education Minister Yvette Berry said around 206,000 tests will be distributed to public, Catholic and independent schools in the first week of term.

From there, two tests per week for the first four weeks of term will be given to students and staff, although producing a negative test before attending school will not be compulsory.

The union is also critical of what it says is a lack of clarity around how staff shortages will be managed in the Territory’s schools.

“Where schools do not have sufficient staff to operate within their usual programming, the AEU expects that measures will be taken to reduce the workload burden on staff, including school principals. The workload is simply unsustainable. If it does not improve, we will lose even more teachers from an already struggling system,” Mr Judge said.

“While some of our larger schools may be able to absorb high staff absences, smaller schools will simply be unable to operate within the government’s plans.”

The ACT Education Directorate says that given existing staffing pressures, various strategies will be engaged to cope with staff absences.

This could include combining classes, using relief teachers, limiting and cancelling some non-essential activities, or providing supervision only.

Directorate staff could also be brought in to supervise classes in some cases, while a switch to remote learning may be required in critical situations.

Catholic Education for the Canberra and Goulburn Archdiocese has been in contact with retired and casual teachers to see if they can step in to fill absences as required.

The ACT Council of Parents and Citizens Association welcomed the news of rapid antigen tests being supplied.

President Alison Elliot said this “was something that some parents were asking for”.

Ms Elliot acknowledged that going back to school this year is a worrying time for everyone and she’s heard from many parents who are anxious about it.

“It was never going to be possible to please everyone. We’ve heard from a lot of parents who wanted the return to face-to-face learning to be delayed until this peak has passed or primary schoolers can be fully vaccinated. But parents have been very split,” she said.

“An equal number of parents wanted schools to be open from day one and were strongly opposed to home learning.”

Kids and teachers should return to school. Yes, some will get Covid and have to stay home with the sniffles. So what. The education directorate and union are implementing risk management, not risk avoidance. No doubt there are is a small minority overly anxious teachers and parents who prefer pupil free days and working from home, but this selfish cohort should not dictate to the directorate, union, other dedicated teachers and parents. The best way forward is what what is best for the community as a whole.

Yes very true Tim, we’ve been dropped, remember “the masks off” and early border opening ie “go for it“ attitude, the ACT gov left us all in limbo. Disgusting to say the least.

The ACT government has been largely absent compared to when we were in lockdown last year. They’ve really dropped the ball with their relative lack of communication.

Tim Mak probably because numbers are not matching up, and people are starting to see the truth

Not all tests are created equal

Ever increasing teacher shortages. They leave because they are burnt out. The hours they put in leave little time for their own families. The time to actually ‘teach’ is stolen by so many admin tasks. They have poor career paths and are disrespected by their low remuneration.

I’m unsurprised they are unconcerned about the absolute freefall in the education outcomes of the ACT’s kids.

Nathan Burraston What is your answer?

Nathan Burraston teachers are left with so little time to actually teach’.

Elizabeth Ann Thurbon just an observation, the ACT less than a decade ago had the best NAPLAN results in the country, today they are (by a measure) the worst. Other states and territories suffered Covid also, so it isn’t that. Teaching is a career not a casual job so the same teachers from years gone are still (my the majority) the teachers today (who do a great job!).
I wonder what it could be?
Is it the curriculum the ACT Education Minister has prescribed? 🤔

Nathan Burraston all states follow the Australian curriculum. Many previously had their own curriculum/syllabus but all should be following the AC now. ACT has been doing so longer than many others

Nathan Burraston teachers are burning out and feeling undervalued and are being micro managed instead of being able to teach as professionals.

Nathan Burraston Maybe talk to the directorate about that. They waste SO many hours of teacher time every year that could be spent in practical preparation for class.

You cant have clarity when you’re flying by the seat of your pants. They’re doing the best they can but thats the the long and short of it and no one would ever say that because if you did they’d sack you

I think we should be thankful the ACT Government has sourced the RATs so quickly, and also that young children seem to be largely unaffected by this illness, especially the prevailing omicron variant. The main message is that weighing up all the risks, it is far better for our children to be at school having face to face instruction rather than resorting to the much poorer substitute of remote learning which is draining on teachers and not good for most young people.
Teachers are, in most settings, double vaccinated (and now prioritised for the booster if desired) so have the best level of personal protection possible. The risks are low, I think.