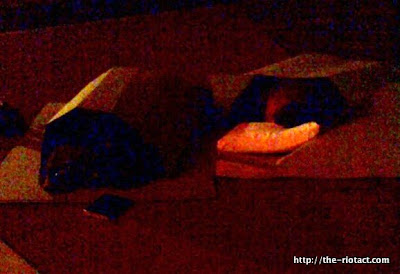 Last night marked the first national staging of the Vinnies CEO Sleepout, An event first staged as a local community venture in Sydney’s Parramatta in 2006, and based on the success last night, one that I am sure to be repeated around the country for many years to come.

For those not aware of it, the CEO Sleepout is an event that challenges politicians, community and business leaders, to experience a night of sleeping rough and getting a brief insight into the experience faced by the estimated 104,700 Homeless people across Australia (Australian Bureau of Statistics 2006).

On reflection this morning I have to say it was quite a moving experience. Provided with nothing more than hot coffee, soup (which was surprisingly tasty) a bread roll, and three pieces of cardboard on which to pitch our sleeping bags the participants spread across the Garden of Australian Dreams at the National Museum in search of a place out of the wind and rain on what was a pretty ordinary Canberra winter’s night.

A few feeling particularly brave even chose to forgo the relative comfort of a sleeping bag.

For an hour and a half earlier in the night we were challenged to think about the realities of homelessness. Its not just old men with drinking problems as many might have thought beforehand.

We heard first hand the stories of Grace and Wayne. Grace who at times had been reduced to driving around at night with her two infant children, trying to make a game of it so that they wouldnt be exposed to the harsh realities of having no permanent place to stay. And Wayne, who has been without a place to call his own for 30 years since the age of 14 (unless you counted the ledge in that drain pipe of his youth).

Perhaps most telling was their recount of loneliness and ostracization from the rest of society. Their sense of gratitude to the St Vinnies staff who extend a welcoming embrace and acceptance of them as fellow human beings on an ad hoc basis was palpable around the silent, attentive room.

This morning at 5.30am we were again challenged to take a message back to the wider community for discussion. What can we do as a community that will prevent people falling into situations where being homeless is the only option, and what can we do to get them out of it? In Australia, it should unacceptable that 54% of homeless people seeking supported accommodation are turned away. (Australian Institute of Health and Welfare 2008), and yet more often that not we turn a blind eye.

I tend to agree

I could also bet there was security there

In regards to Ms Burch, who goes off at fridays to enjoy family time – I doubt one night makes any change to the Housing policy she got lumped with. Infact I doubt any of them give a crap that some people no longer feel safe in any house because of the ALP Housing social experiments (yes the ACT Government used people for a crule social experiment).

To avoid any public problems with the experiments being conducted on people the Government used clients from services like mental health, other community services, and corrections as unknowing test subjects. Any complaint results in a Mental Health order to supress any claim of neglect, discrimination, physical assault, physical abuse, attempted assault, etc..

I wonder if mental health and bank managers were there – would of been a good place to start considering the comment of “Its not just old men with drinking problems as many might have thought beforehand” in a land of half million dollar homes, no land releases, and increasing costs of living plus the $110 for a coloured ALP card to have a job. IMHO $3m is an Insult to those who are homeless or not one of the $1m dollar social butterflys. And I am darn sure some of the less than $3m comes from pricks who make a living at keeping others under control – not much wonder some donate.

I know I’m a little late to the party, but Senator Ursula Stephens was there, as well.

that’s ok skid, one can be forgiven for not noticing Ms Burch …

Apologies if Ms Burch was there, I must have missed her entry on their promo website, as that was the limit of my research. 😐

jackal – I was going by the not so trusty riotact information given by agitator skid above.

Donations can still be made at http://www.ceosleepout.org.au for anyone interested.

Joy Burch was there, all night, with everyone else, she just chose not to put out a media release about it.

Joy Burch should have been there. Given it takes her department up to several years to house people appropriately, she should have taken the leap into homelessness for a night.

Top effort to those who participated and raised funds. Onya Jazz, although next time, no beard for warmth, ok?

Does anyone know how many pollies showed up?

Also, this is Jazz’s publicity photo.

Ahh… yes.. the gay lumberjack look taken with a webcam.

Does anyone know how many pollies showed up?