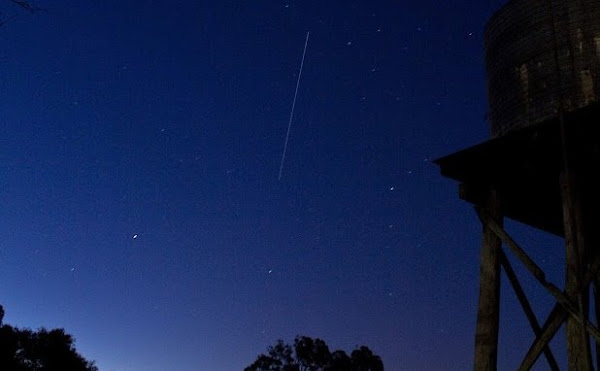 It’s that time again when we get to look up and see the only place where humans live other than on Earth zipping across our skies. The International Space Station has a number of very bright passes coming up over the next few days—some at fairly family-friendly times (given it’s school holidays anyway).

For Canberra people there is a very bright, high and long pass each of the next five nights, including tonight. Anything from this table above -1.5 is quite bright (above being a larger negative number).

It’s great fun to try to catch the ISS in a photograph. Set your photo quality to the highest possible (RAW if you have it), your lens to a wide zoom, your aperture small, shutter to 30 seconds or more, prefocus on something as far away as possible and then turn autofocus off. Set your camera on a tripod pointing towards where the ISS pass will appear. Use a wired or wireless remote if you have it, otherwise set the self-timer to two seconds to give any button-pressing vibration time to settle before the shutter opens. 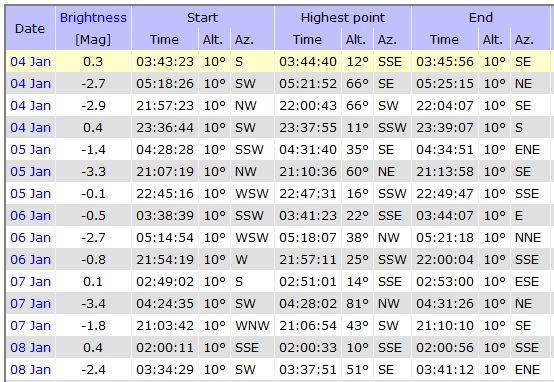 I also like to frame up a foreground object as long as it isn’t lit too much. Conversely, if the foreground is very dark, you can ‘paint’ it during your exposure with a second of light from a torch. Photoshop will also allow you to brighten ‘shadows’ afterwards to highlight your foreground.

To really nail down where the ISS will appear in your sky, iThing users can download the great little app ISS Spotter.

For added interest, try to catch yourself an Iridium flare. These are extremely bright but very short flashes of sunlight off the very shiny Iridium satellite telephone network satellites: 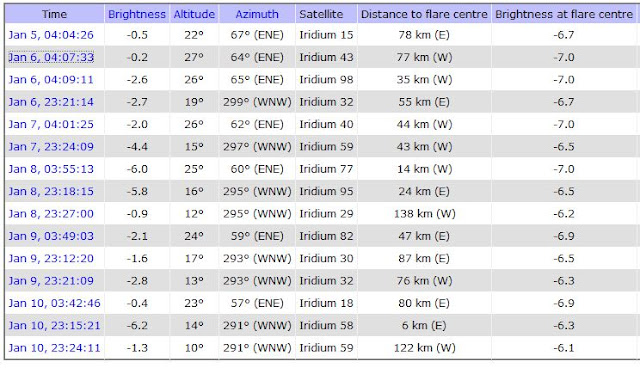 Wondering what all these brightness figures mean? As they explain on www.heavens-above.com:

So those flares going as bright as -7.0 should be something to see…

Oh and I was tracking the ISS tonight in ISS Spotter—it was just off the southern tip of New Zealand when it finally blinked out of view here!

Tonight was by far the best night (of a reasonable time)
Now to figure out a way to get there and find the geocache on board.
Thanks for the info Al!

Cheers! (I must try geocaching…)

I just snagged the Iridium flare—my first. Wow! At Mag -6.5 that was WAY brighter than Venus at it’s brightest. Like a airliner headlight coming in.
There are two more on Tuesday night only 9 minutes apart.

Tonight was by far the best night (of a reasonable time)
Now to figure out a way to get there and find the geocache on board.
Thanks for the info Al!

Your friendly 9:03 pm ISS pass reminder. Look to the west-south-west.

Thanks Al! Most informative!

I saw the it!! I had forgotten how fascinating the night sky is, thanks Al!!

Thanks for the reminder. 🙂

Just watched the ISS cruising overhead from my back deck. I’m fortunately heading off for a few days, or I’d have a crack at getting my scope to track it and snap a few photos…

I actually wrote this on Friday but the browser I was using wouldn’t allow me to attach the graphics. Then I forgot for a while and by the time I uploaded it, JB had packed it in for the night. How dare he have a life… And the Friday pass was a bottler too! I did get it up on my blog in time for a few people to see it though… 🙂

Unfortunately my photos didn’t work out. It’s tricky guessing the balance between ISO/aperture size and ambient light pollution blowing out a 30 second shot. So I got nothing but hot pixels… Going back to Canon shortly.

Anyone get any photos or was it too cloudy? I saw this post only a few minutes ago and missed it.

Thanks Al. Will definitely have a look.

Capital Retro - 4 hours ago
Nailed it. Many of us still believe in those aspirations and values. Also, Canberra Libs need to talk in billions of dollars... View
Keran Niquet - 4 hours ago
Colin Vivian .Totally agree. The back stabbing of Gary Humpries by the party and Zed started the rot. Until they withdraw sup... View
HiddenDragon - 6 hours ago
Noting that the ACT commentariat now treat light rail and the stamp duty/rates-land tax trade-off as articles of faith in a s... View
Sport 2

Cassandra Jones - 4 hours ago
Michael W Doyle come down for a visit and give my Charlotte some lessons!! View
Community 24

Roger Mungummary - 5 hours ago
Tge total lack of costings for their pie in the sky promises easily branded them as trickle down advocate coverage... View
HiddenDragon - 6 hours ago
"In order to unseat a very established government in a progressive city, the Liberals have to do everything right, and the ti... View
Colette Robinson - 12 hours ago
Mac John they don’t seem to have ever cared at all about people who don’t own cars. View
Lifestyle 56

Brenton Higgins - 6 hours ago
Not in the slightest - the extent of act gov involvement was they opened an EOI for two operators. No govt involvement other... View
Carlos Wallace - 6 hours ago
Everything is dangerous to everyone in 2020. I'm just happy to see people and families out and about smiling. You can't wrap... View
Steven Harris - 6 hours ago
Also be aware that lots of places are speed limited but you still get slugged the same per minute rate. IMO the rate should d... View
Lifestyle 8

HiddenDragon - 8 hours ago
Whatever the outcome on ministries, it would be good to see the Greens avoid any agreement with Labor which involves an expli... View
News 11

Jacky Clements - 11 hours ago
Janine Demitriou in your hood... View
show more show less
*Results are based on activity within last 7 days

Six people have been forced to quarantine until 21 October after being identified as a close contact of a confirmed...
What's On 5

In the NSW Southern Tablelands is a garden property once closed to all but the Australian gentry, but now open...
Property 5

The three-bedroom, two-bathroom home at 43 The Crescent in Queanbeyan is an exceptionally renovated home. Built in the Californian bungalow...
Opinion 41

A brand new colourful and hip dumpling joint has opened in the heart of the Bradley Street foodie precinct at...
Community 24

@The_RiotACT @The_RiotACT
Are you worried about the fluff floating around Canberra and wondered what it is? We have the answers https://t.co/QKphbiFRAc (4 hours ago)

@The_RiotACT @The_RiotACT
The Basement is one of Canberra’s premier live music venues but somewhat surprisingly, it also serves up vegan deliciousness in spades https://t.co/apRKeItW9y (6 hours ago)