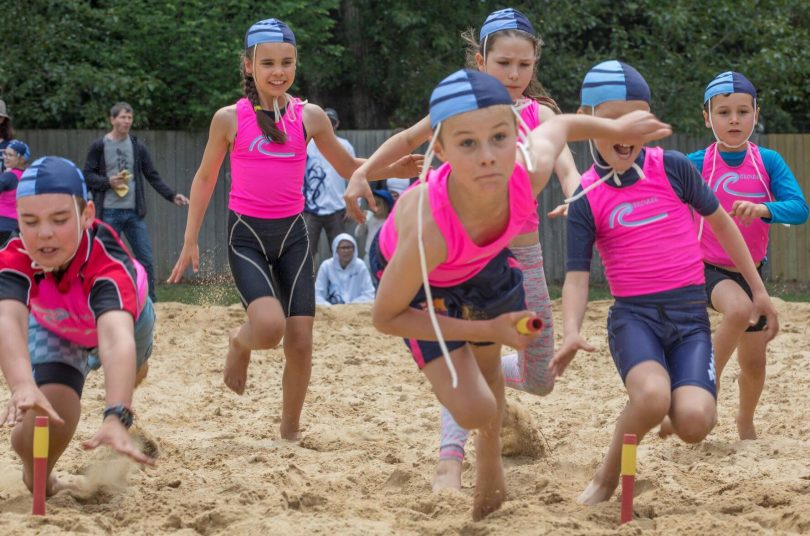 Local children’s surf life-saving club the Canberra/Broulee Nippers has been overwhelmed with interest in only its second season, having to turn away families wanting their children to learn swim survival skills and ocean awareness.

Canberra/Broulee Nippers Manager Bethany Williams said the club had signed 130 Canberra children and pointed to a possible expansion of Nippers in Canberra to meet the demand.

Families and children were able to experience the Nipper activities at the carnival style launch last Sunday at the Canberra Olympic Pool where they learned about beach flag races, how to paddle on a board and do line throws.

“The Canberra/Broulee Surf Boat team even brought one of their boats in so that they could have a go on the boat,” she said.

“When registrations closed, we were really sad that we had to turn prospective families away due to resource and space limits.”

Ms Williams said it was an incredibly positive event, and showed how Canberra families had embraced a Nippers program in Canberra in such a short time.

“It hints to bigger and better things to come as we try and bring in partners to support a possible expansion of this program here in the ACT, which might involve more South Coast surf clubs, and many more Canberra kids being able to participate each year,” she said.

Ms Williams said CEO of Surf Life Saving NSW Steven Pearce was on site to show his support for the Canberra club, saying he was really impressed with what had been achieved and knew how important it was for children in the ACT to have access to crucial water safety and survival skills.

Bec Cody MLA for Murrumbidgee also attended on behalf of the ACT Government.

Ms Williams said that demand for spots in the Nippers this season far exceeded her expectations.

“We were hoping to beat last years number of 80 kids, and were going to cap numbers at 100. But when registrations closed at the end of August, we had over 130 kids sign up” she said. 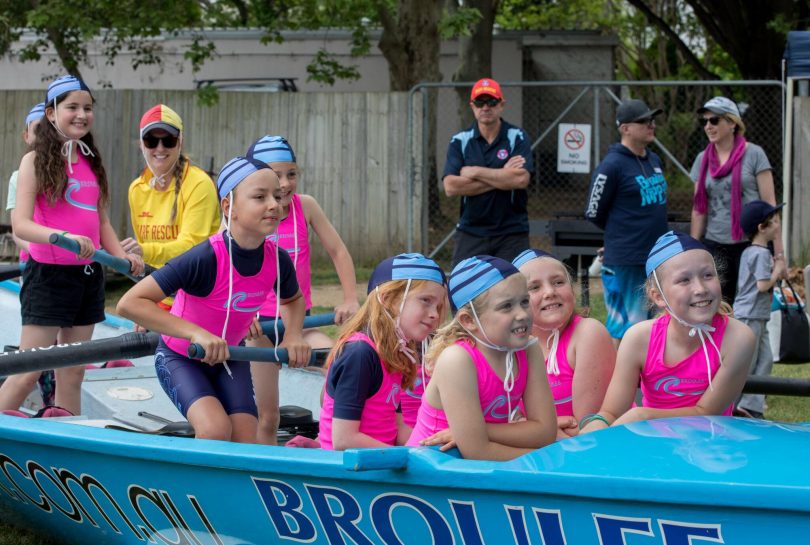 She said the Canberra/Broulee Nippers program was set up last year with no resources and a handful of volunteers.

“This year, so many parents have volunteered to help out, and with the experience of last season’s volunteers, we are set to have an amazing season that not only focuses on ocean safety, but also pool rescue training, and first aid and resuscitation,” she said.

The objectives of the Canberra/Broulee Nippers are to give Canberra kids the opportunity to learn vital ocean safety skills and contribute to reducing the number of drowning deaths and drowning accidents causing permanent injury.

Lifeguarding Services Australia says that only one in seven ACT children can swim 50 metres by the time they leave primary school.

Figures from Royal Lifesaving ACT revealed that only 15 percent of ACT students are meeting the national benchmark set by the Australia Water Safety Council.

Director of Life Saving Andrew Edmunds said that quite often, those rescued come from inland areas including the ACT.

“Around 84 percent of the people rescued by lifeguards at South Coast beaches last summer were from the ACT” he said.

“The Canberra/Broulee Nippers program is designed to improve ACT kids’ knowledge of the surf, and other waterways, which can only be a great thing. Bethany and her hard-working team of volunteers who have partnered with the Broulee Surf Life Saving Club are to be congratulated for their ongoing efforts in helping us in our goal to reduce instances of drownings and rescues.”

In their inaugural year, the Canberra/Broulee Nippers were finalists for two Surf Life Saving NSW Awards – Initiative of the Year and Community Education Program of the Year.

Memberships to the Canberra/Broulee Nippers are closed but will reopen in August 2018.

Meg Power - 4 minutes ago
Alex Stinziani can we buy this together and live our best lives?... View
Community 12

Pauline Parks - 14 minutes ago
Congratulations on 70 years together, lovely to see you well looked after as you did for others Ken & Pauline View
Marilyn Fasham - 36 minutes ago
Wonderful neighbours we miss you very much View
Opinion 166

Tom Henry - 33 minutes ago
Pete Henry This would be loose View
JS9 - 2 hours ago
You really are obsessed and bizarrely offended by a colourful roundabout..... very strange. Not surprising, just strange,....... View
JS9 - 2 hours ago
I'm all for motor sport events too - but V8 races in Canberra will never stack up without enormous subsidies from the Governm... View
News 21

MERC600 - 1 hour ago
Mr Barr "“It would be really unfortunate if the Christmas gift to the nation is the highest ever level of cases across Aust... View
whatwik - 3 hours ago
Think of it as indicative only, with caveats, and not in any way specific. It's going to be a long school holidays for some. View
News 31

Peter Graves - 2 hours ago
It's slightly off-topic, but Larry Noye did write the definitive biography of King O'Malley. To whom we owe a great debt for... View
Margaret Lay - 3 hours ago
Gary J Potts I actually remember the local Dr Dr Potts any relation? View
Community 2

kenbehrens - 2 hours ago
Largely, I agree, although it's not those who are educated and trustworthy that are the problem is it? Lockdowns are to prote... View
News 3

Liza Jensen - 2 hours ago
Does anyone know where I can find information about how Landlords apply for the land tax rebate if they give tenants a reduct... View
News 26

Marty Hoenig - 3 hours ago
Yes by the closure by Sports Australia of the AIS Fitness Programs ..... View
Community 62

Catherine Mckean - 3 hours ago
Noni Evans I have one in my back yard. View
Community 1

JaseM - 3 hours ago
Fantastic story, and thank god it is being done by the salt of the earth..... View
News 26

Melissa Snape - 4 hours ago
Jenny Smits That's OK, Mabo can be pretty. We will pitch to get some of the bigger, wider corridors me thinks 😊 View
News 4

Charlie McIver - 4 hours ago
“Keep to the left!!” Chloe Despina View
show more show less
*Results are based on activity within last 7 days

We all knew it was on its way. Less than a month into spring, and sure enough, there's a cold...
Property 23

@The_RiotACT @The_RiotACT
Watch this morning's rescue of a kangaroo from the freezing waters of Lake Burley Griffin https://t.co/MDcZa2adT1 (34 minutes ago)

@The_RiotACT @The_RiotACT
Fewer #exposure sites were added to @ACTHealth's #COVID-19 locations list overnight, and there were no close contact sites. An announcement on mental health funding is expected at today's 11:45 am press conference https://t.co/cKYolhCFg3 (2 hours ago)

@The_RiotACT @The_RiotACT
LDK Seniors' Living's $143 million proposed aged care facility next to Yarralumla Horse Paddocks needs to be scaled back, the National Capital Authority has been told in a community council's submission https://t.co/eEERxoj8Y8 (2 hours ago)