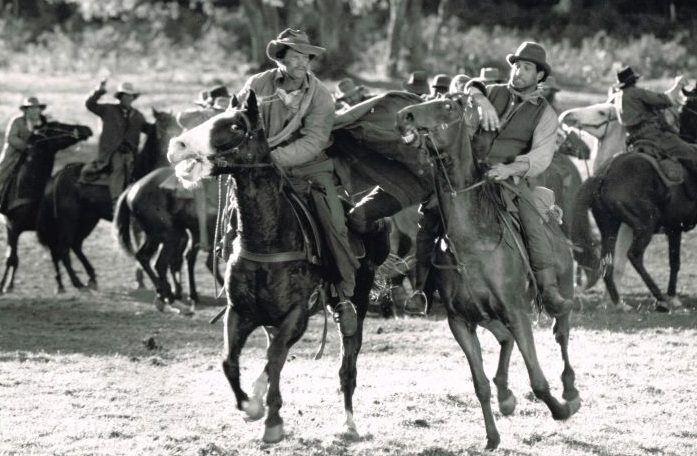 Ken Connley (left) worked as a stunt rider in The Man from Snowy River. Actor Jack Thompson told About Regional that his relationship with Ken endured as a result of their friendship on the set. Photo: Supplied.

Ken Connley, legend of the high plains, has died aged 74.

A crack rider by nature and by career, his most pronounced love – next to his family, his dog Husky and a horse named Ace – was for brumbies.

He said catching brumbies was the best sport he knew. At this Ken was exceptionally skilled – notching up well over 1300 brumbies in his time.

Born at Omeo Hospital on 30 March 1946 to Jim and Grace Connley, he and his siblings, especially older brother Ron, spent their childhoods on the family farm near Omeo with the high country on their back doorstep.

It was country Ken knew like the back of his hand. As a kid, he’d mount up and disappear for days.

His schooling days ended at 14 after a row with his teacher, says Ron, “he said she wouldn’t teach him anything”.

Stories of Ken teem. None of them fiction.

This was a man who could read the weather, bring a horse into a bar, sleep outside in a swag on the footpath, drink warm beer to get an early buzz and ate a whole clove of raw garlic each morning.

Ken followed his brother Ron – a bulldogging champion – onto the rodeo circuit. He got the taste for that after winning his first three poddy calf rides at age 11.

Ron said his brother was also fairly successful with the lady folk, always with “one under each arm and another spare”.

A nurse who cared for him after a car crash won his heart and when he and Joan married in 1972, it was the start of a 48-year union that produced four children – Angela, Tarina, Sharlee and Christopher.

Joan admits there were still women. But their love endured to the end as she tended him in his final days alongside his partner Heather.

Ken had a brilliant eye for a sound beast and good land. He’d run his stock between many blocks but two properties “Rosevale” near Omeo and “McKinnons” at Benambra were home, the latter bought with money Ken earned from selling brumbies he caught and trained.

He was a hardworking man says one of his daughters, Tarina. There were no days off. It was a glass of water to the face as the wakeup call and irrespective of school, if there were brumbies to get, Tarina would head out with Ken.

That was buckrunning, Ken’s nirvana. Joan said Ken would go bush and return with the brumbies tied head to tail trailing behind him.

In a tribute, the Benambra buckrunners said, “Ken Connley was as wild and untamed as the very bush itself and as much as part of nature as the brumbies”. 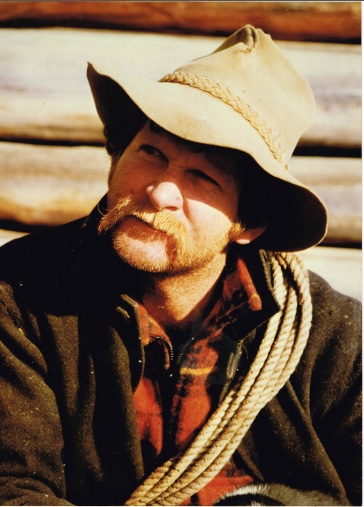 Ken Connley was in his element in the bush chasing brumbies. Photo: Supplied.

Few men of the saddle boast an IDMB profile – but Ken was a stunt rider, actor and horse wrangler on The Man from Snowy River, Return to Snowy River, The Lighthorsemen, Quigley Down Under and Red Hill.

Actor Jack Thompson, who played Clancy in The Man from Snowy River, spent his formative years as a stockman in the Northern Territory, but it was Ken who taught him how to ride in the high country.

“Galloping downhill is not something people do by choice – they walk down and gallop up – he taught me how to sit right in the saddle with long stirrups going down the hill,” Jack said.

“He was the real deal – when Ken turned up as my stunt double I was really fortunate because Ken was a man who really was a Clancy,” he said.

“He was a generous-spirited man and had a wry sense of humour, he was a good man and a good mate who’s headed off into the great beyond.”

A wild young local lad Tom Buckley spent most of his teen years with the Connley family. Ken’s son Chris is his best mate.

He said he learned how to do a farmer’s hard day’s work from Ken.

“I’d be a completely different person if it wasn’t for him,” he said. “He just had a way with animals. I think there are people who naturally connect with them and Ken was one of those people.”

Ken once shared his story of Husky “the best bloody dog I ever had” with The Australian.

“When it came to catching brumbies in Victoria’s High Country … Husky had a sixth sense for the chase; he’d go miles ahead, sniff out the brumbies in the thick scrub, then lead your horse to the spot.

“It was like he was talking to you,” Connley marvels.

As Ross Bilton wrote in The Australian: he loved that dog. He loved him so much that when he died he had him stuffed and put him on the mantelpiece.

Ken reasoned, “that way he can stay with me for the rest of my life”.

And Husky did, accompanying him to the garden for a chat and a cup of tea and, one time, even the Melbourne Cup. 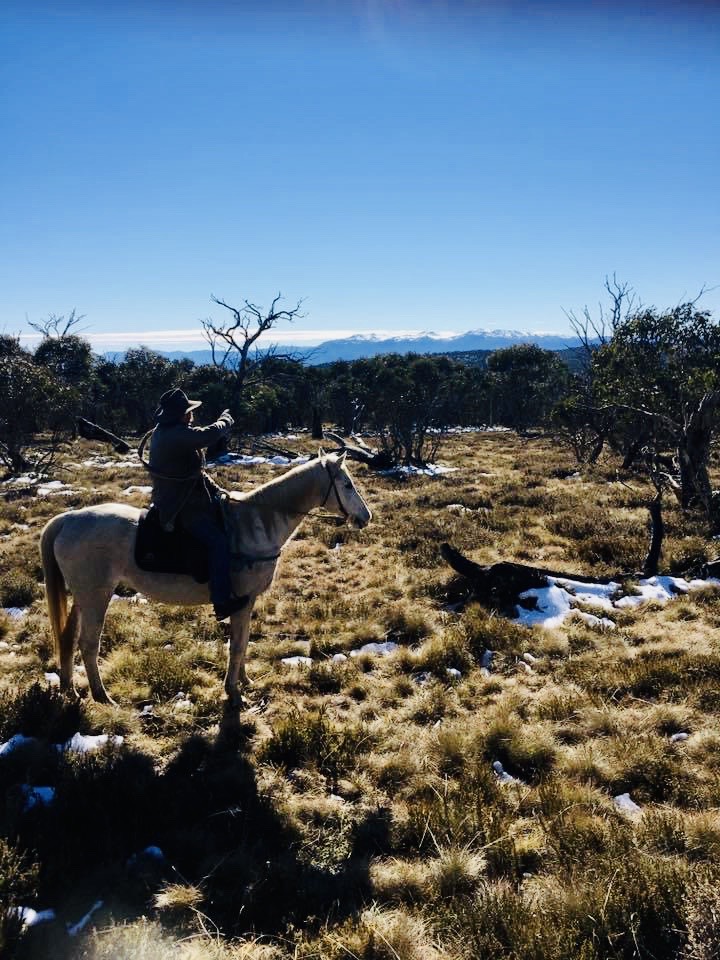 “They wouldn’t let him in at first. They said, ‘Sorry, no dogs’, but it turned out there wasn’t a rule against stuffed dogs …” he told The Australian.

Ken captained the Geebung Polo Club 30 odd times against the Cuffs ‘n’ Collars team in the longest-running polo competition in Australia. It’s a no-rule game that all but plays out Banjo Paterson’s grim tale, on a high altitude tussocky plain with freshly cut Snowgum goal posts stuck in the ground.

“You don’t get those sort of people any more … he really was a genuine Crocodile Dundee,” he said.

The Geebungers played hard. One night said John, they notched up $15,000 on a bar tab he’d set up.

Ken Connley spoke as he lived, colourfully and to the point.

He will arrive and depart his Bairnsdale funeral in a horse-drawn carriage organised by that other high country great Charlie Lovick. His ashes will be scattered at “McKinnons”.

That is a great story. A true Aussie. They are a dying breed now ☹️