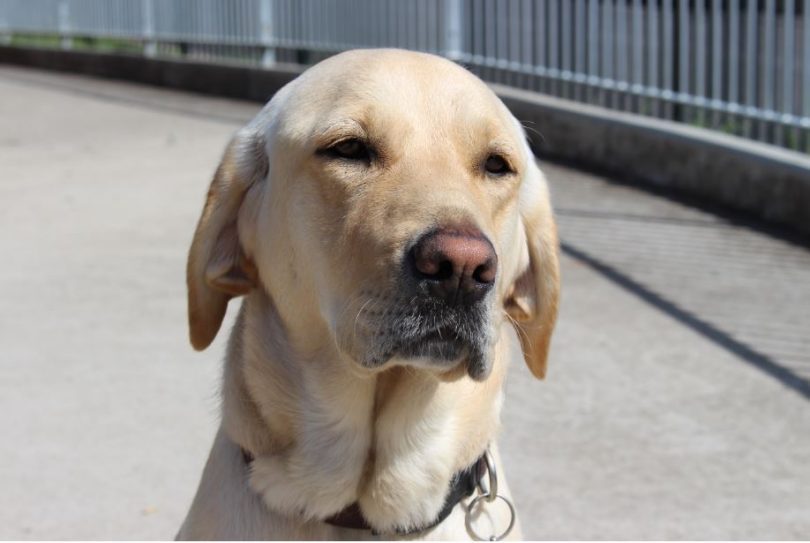 A Golden Labrador named Felicia has won the heart of everyone at Bega High School and proved the potential of a second chance.

Part-friend, part-teaching aid, this two-year-old lab brings smiles, companionship, and support where ever she goes.

Felicia started in the guide dog training program but her temperament wasn’t up to the job. Thankfully, it is perfectly suited for work with the students and teachers of Bega High.

“She loves other people, loves other dogs, and is a little distracted by food,” laughs Felicity Gates, from Guide Dogs NSW & ACT.

“To get her to refocus after a distraction or ignore those things was difficult.”

Felicia goes home every day with Jessica Harris, Head Teacher of Special Education and her partner who is also a teacher at the school.

“When she is at home with us she is a real two-year-old, chasing her tail, jumping on the trampoline,” Jessica says.

“She is very much part of our family now.

“But when you put her harness on for a day at school she changes instantly – she knows she has a job to do.” 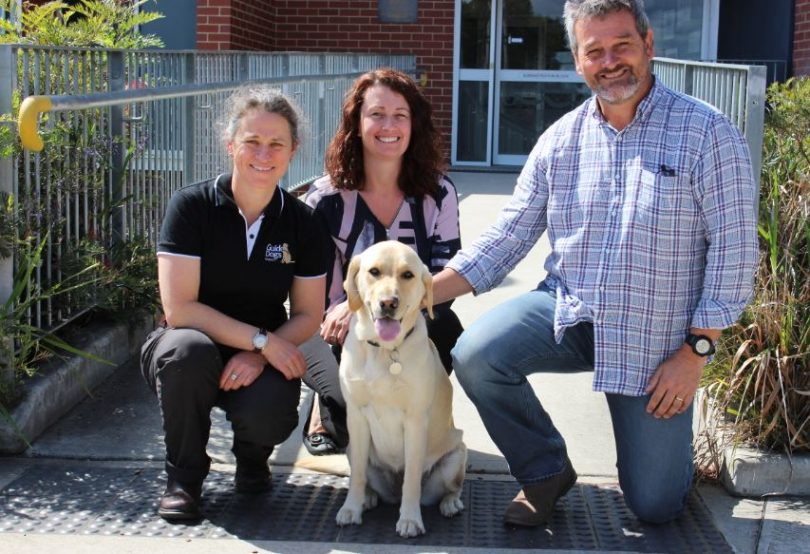 During the school day, Felicia tends to go with Mark Freedman, Head Teacher of Student Welfare, but happily goes between Special Education, the school counsellor, science labs, the Vice Principal’s office, and the various hangouts in the playground.

Vice Principal, Scott Defina says students have really taken to the responsibility of looking after Felicia.

“We talk about it at school assemblies, the kids know that Felicia loves food, and that’s what took her away from being a guide dog,” he says.

“And what we have noticed is that the school is now cleaner because of that, the kids are more aware of putting their food scraps and rubbish in the bin.”

The school’s love of their dog has even grown to a video series on the Bega High School Facebook page – The Adventures of a Failed Guide Dog.

THE ADVENTURES OF A FAILED GUIDE DOG

Episode 1The one where Felicia visits the Senior Hangouts.

The real impact of Felicia’s presence is hard to measure, but the experience of the last six months has been almost transformative for the school.

“When there are kids who are distressed she [Felicia] will just get up, go over to them and put her head in their lap,” Mark Freedman says.

“It is magic, it’s just beautiful what she does, it just makes the kids feel better.”

What was a weakness as a guide dog is now a strength in the context of Bega High School.

“She is very sensitive to people, which is half the reason she didn’t make it as a guide dog,” Felicity says.

“Her sensitivity towards people was a distraction to guide dog work.” 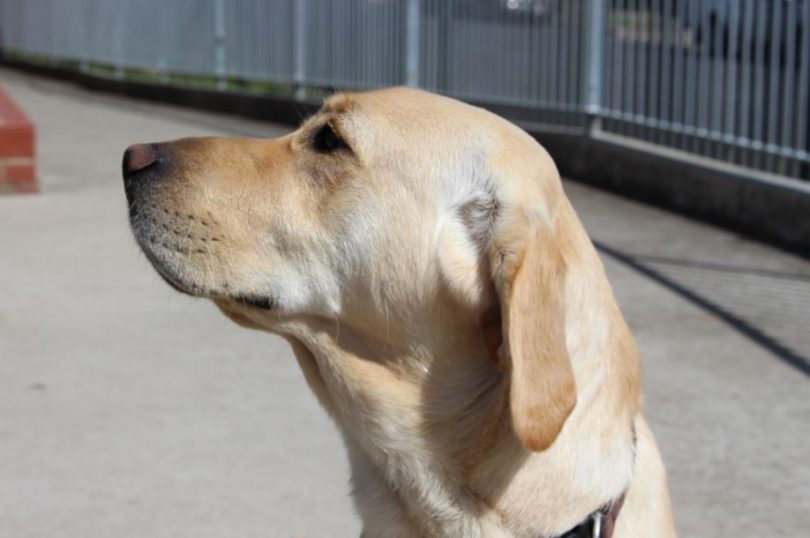 Felicia has been part of the Bega High School community for the last six months.

Mark laughs when he says he sometimes feels redundant in Felicia’s company.

“She will start the day with me, my office is her base, and teachers can just come and grab her, I love it when she goes to everyday classes like physics.

“And there are heaps of kids that will actively seek her out, and come to my office because she is there.

“My fundamental job is to build a relationship with every kid in the school so that if there is a problem they can come to me and we can deal with it.

“There are kids who previously wouldn’t come to me but now they do to see Felicia and all of a sudden I am through the door,” Mark says.

Felicia also finds herself being the icebreaker when difficult conversations need to happen around discipline.

“She just de-escalates the situation straight away and allows you to get your message across,” Scott says.

Word is getting out about the bond between Felicia and her schoolyard pals and the positive influence both are having on each other.

“I have been bombarded by other schools who have heard about Felicia, they all want a dog,” Jessica says.

“It just makes so much sense – of course a dog like Felicia at school is going to make people calmer and happier,” Mark says.

“But I didn’t anticipate it would be as beautiful as it is – every kid feels like Felicia is their dog.” 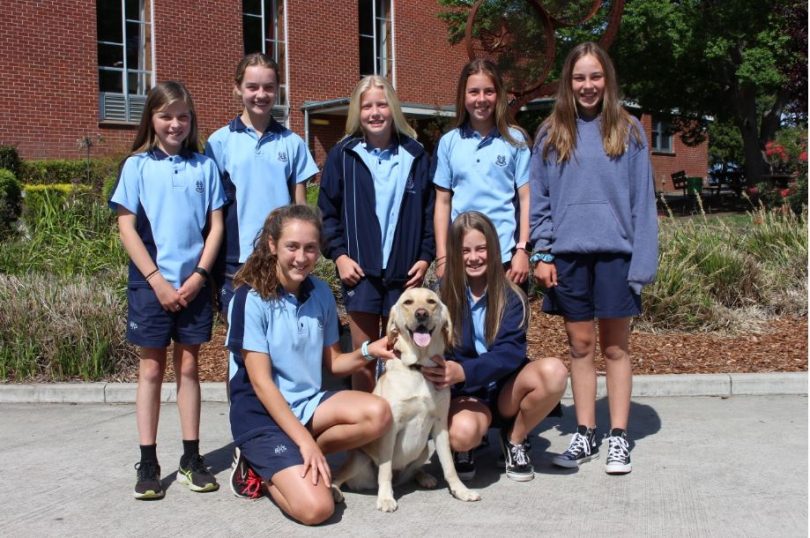 Her reputation around Bega is growing, Jessica says she is often stopped out of hours at the shops on the way home.

“People say – is that the dog from Bega High? She is a star!” Jessica says.

“I think for me coming from the Guide Dogs, to see a dog who has been reclassified doing so many amazing things for so many people is very rewarding because what I usually see is these dogs do amazing things for just one person,” Felicity says.

“Now a whole community gets benefits from one dog.”

Peter Bucke - 10 minutes ago
Has it been booked for parking on the nature strip ? View
Bob Foster - 4 hours ago
How long till it gets graffitied??? View
Derek Simpson - 12 hours ago
Steve Ager i think she who must be obeyed would have a differing opinion 😁😁 View
News 25

Amanda Salske - 16 minutes ago
The parents should be given the tests to do at home with their children. I don't feel comfortable having teachers touching my... View
Amanda Salske - 19 minutes ago
No one will be testing my children apart from myself or a doctor. View
Emjay Barker - 38 minutes ago
Daniel Duncan that’s a great idea 🤣 View
News 44

Capital Retro - 35 minutes ago
I know that JC but it wasn't in the link I referred to. The "arms length" ownership is along the same lines as the Canberra L... View
Capital Retro - 39 minutes ago
Never heard of this dude. I note he refers to CGS as a "business" too. How come no one is criticizing the Federal government... View
doomattheend - 11 hours ago
Good to see the Greens MLA attacking a private school for a federal issue rather than keeping the labour party in check. Of c... View
News 316

Kalo Arepo - 1 hour ago
Not only do gum trees fall over at the drop of a hat but they are also potential bombs ready to explode when a bush fire occu... View
Public Sector 14

Mark Johnson - 11 hours ago
Belinda Makrides don’t think it would make a difference. Toyota have a pretty good rep no matter where they are made. The H... View
Mark Wallin - 12 hours ago
A car you operate rather than drive. View
Opinion 43

HiddenDragon - 12 hours ago
Boiled down, that sounds like an argument for more people on the public payroll in Canberra - good luck with that when the Au... View
Monda Scoltock - 12 hours ago
Alexandra Hunter - no doubt! View
Food & Wine 8

@the_riotact @The_RiotACT
Peter Walker's overcome some serious battles over the past 20 years, but he says he's ready to take on the #challenge as the new mayor of #Goulburn https://t.co/OCLVo6yk2h (37 minutes ago)