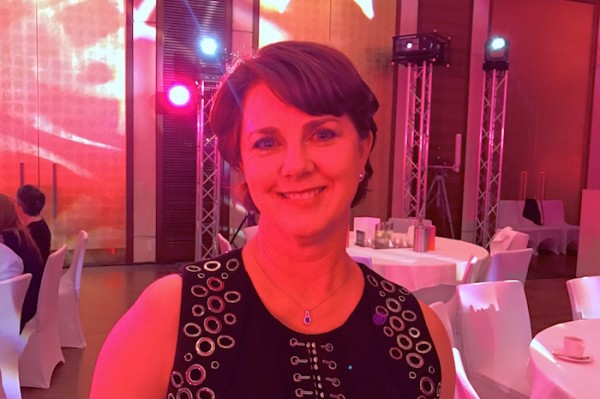 Gynaecologist and fertility management specialist Nicole Sides used to wonder what success would look like. She knew it would mean she no longer had to shop at Franklins, but wasn’t sure at what point in her career after that she would be considered a success.

After pondering this for some time, Dr Sides says she came to the view that success was about the journey rather than a destination. So she told us upon accepting her first award at the very pink-themed ACT Telstra Women in Business Awards last night, in the Entrepreneur category.

None of that quite sensible talk seemed relevant later in the evening when the founder of Compass Fertility was overcome with emotion on collecting the top award of the night, for ACT Business Woman of the Year.

It was a success as destination moment if ever there was one:

We spoke to Dr Sides afterwards to ask her about the secret to juggling her work as a clinician and surgeon with that of running a growing business.

“You do a lot before work,” she says.

“A lot of breakfast meetings, when you’re fresh. I’m not as good after work, because often you finish at 6pm or 7pm.”

“We’ve got a flat hierarchy, so we’ve got a really good team.

“So we’ll say, this is bothering me, what do you think we should do, OK, let’s do that.”

Dr Sides and her team are currently considering expanding the business into the Middle East, to either Dubai or Abu Dhabi. Such a move would mean a lot of travel and a dual focus for the Telstra award winner.

If the reaction on Facebook to the news of her win last night is any indication of whether Dr Sides can pull off this expansion, she’s well placed.

“Brilliant dr! I love her matter of fact and down to earth manner. Well done nicci.”

“Congratulations Nicci! Such an important line of work for so many families. Well done”

The first of Dr Sides’ three top tips for those starting out in business is to be optimistic.

“Just get up in the morning and give it a go,” she says.

“It’ll all look better when you actually stop festering about it … you go into work nice and early.”

The second is to ensure you include exercise in your schedule.

Dr Sides says she walks around a section of Lake Burley Griffin each morning.

“And then I get tortured twice a week by a vicious personal trainer”.

Her final tip is that it’s OK to have the occasional “little pity party”.

“Drink and eat chocolate and watch really bad TV and then dust yourself off and get on with it,” she says.

Like Compass Fertility, Send Hope Not Flowers is related to bringing babies into the world.

Its goal is to raise funds to prevent women from dying during childbirth in countries where they have little to no access to midwives, doctors or even sanitary places in which to give birth.

Co-founder Ms Macdonald says the inspiration for the name came from the fact that so many flowers given to new mothers in our hospitals end up discarded when mother and baby go home. The charity encourages us to devote money we might otherwise have spent on such flowers to helping more women around the world give birth safely.

Last night’s ACT winners will represent the ACT in their respective categories at the national awards in Melbourne on November 16.

Love the video – and what a worthy winner – kudos to the judges.

It’s always great to see someone who focuses on values in running their business. It’s more common than is usually assumed.

It’s a great time to think when you get up early and exercise. A great way to clear your mind and get focused for a big day ahead.