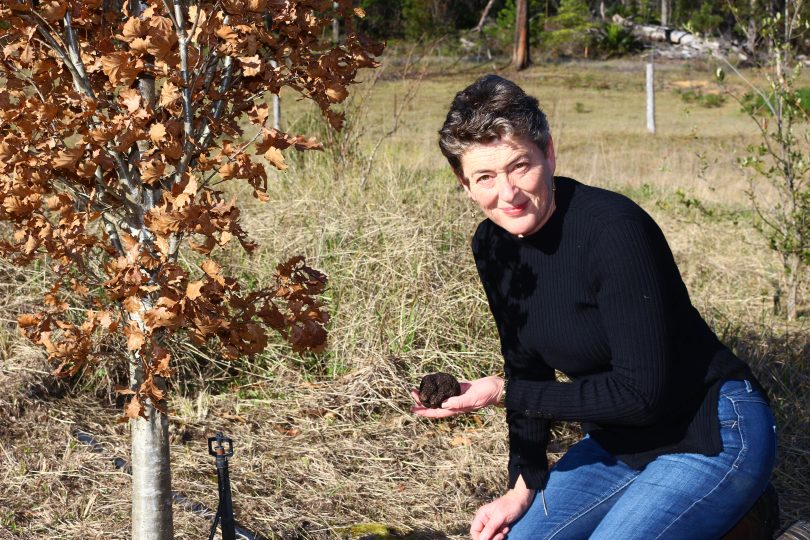 Fiona Kotvojs on her family’s farm at Dignams Creek during a recent truffle harvest. Photo: Supplied.

After a political brawl of epic proportions between John Barilaro and Andrew Constance, the Liberal Party’s Eden-Monaro preselection process has delivered a candidate who says she’s deeply locally grounded but also hard to fit into a box.

Fiona Kotvojs is remarkably diplomatic about the process that finally ended last weekend with a solid victory for her candidacy.

“From my perspective, having a democratic process where members choose who to represent them is key. People got to nominate and stand and the members chose me,” she says.

“Democracy is a messy thing – it’s not nice and neat. We need to value that and the whole process that goes behind it.”

It goes without saying that it’s been a tough year for Eden-Monaro. Already suffering from deep drought, the electorate stretching from Eden to Tumut has been belted by fire and floods, and the region’s tourist economy, in particular, has been hard hit by COVID-19.

Born in Bega, Kotvojs has a long and diverse career that began in teaching, and has encompassed everything from the Army Reserve to preparing environmental impact statements and volunteering for the RFS.

When asked where she sits within the Liberal Party in a factional sense, Kotvojs says she’s not easily categorized.

Her ideal is a small government that sets up parameters for people to become independent, aim for their maximum potential and achieve that. She rejects the idea of dependency.

For all that, her language around climate change is precisely chosen, perhaps for a notably diverse electorate. Kotvojs says that she believes “the climate is changing”, and that “humans are contributing to a changing climate”. In response, the focus should be on “reducing emissions, improving adaptation and also the resilience of communities”.

Citing what she says are the lowest level of Australian emissions per head of population in 30 years, Kotvojs has praise for the Snowy 2.0 project but says that approaches to climate change “need to ensure they don’t adversely affect the economy, increase power prices or reduce reliability”. Her own house is off-the-grid and relies on renewables.

Asked directly whether she believes in anthropogenic climate change, Kotvojs says that humans are “a factor” in a changing climate. But, she says, there are other factors and it would be a mistake to deal with one exclusively.

With regard to differing attitudes across that diverse electorate, Region Media also raised a group submission Kotvojs made in support of the Religious Freedom Bill in 2018.

The submission includes, among other statements, that “Parents should have the right to be notified of and then withdraw their children from classes teaching radical LGBTIQ sex and gender theory [and that] religious schools and organisations should be allowed to positively discriminate in employment for people who adhere to their beliefs on marriage”.

“Same-sex marriage is part of legislation and legal. I support the government’s position. I won’t even contest that,” she says today.

Her stance stems from strong beliefs about religious freedom, grounded in family history: Kotvojs’ Jewish grandmother was in Vienna at the time of Kristallnacht and escaped the incoming tide of Nazism. Her father arrived here on his 10th birthday.

“If Australia had not accepted my family, we would not be here,” she says.

But while she believes in the central importance of religious freedom and freedom of speech, saying that “we cannot risk them”, Kotvojs says she is also concerned that views have become polarised, inhibiting respectful conversation across the political spectrum.

“I truly hope that one thing that comes from the fires is that we can work together well. We have seen that in communities across the electorate. One legacy from the bushfires is that we come out of this respectfully.”

Post fires, she wants to assess what needs to fundamentally change, comparing the challenge to looking at the re-fencing she and her husband, Alan Burdon, are undertaking on their property at Dignam’s Creek.

“We need to look to the future and rebuild so we can do it better,” she says. “The greatest thing to work on is better government coordination at all levels.”

She’ll also seek opportunities for young people to remain in their communities and highlights the likelihood that COVID-19 may prompt more sea and tree changers to move into the region. She wants regional communities to be safe, viable destinations for families making that big decision.

And finally, what about her high profile Labor opponent? “Kristy McBain is a nice person and that’s it,” she says. “I believe I am the person who can deliver for Eden Monaro.”

Don’t know why she claims she doesn’t fit into standard liberal party box. All her positions are the exact same as the existing government.

Good to see a real person having a go. What a great record of community contribution! Could any of the people criticising her in their comments claim such a record? Or are you content to continue sitting back and making baseless personal criticisms?

I’ve been a lifelong supporter of the Coalition parties but after reading this I now go on record as saying Vote Labor.

Dear Mje Mje – bushfires in Australia are NOT caused by climate change. They are part and parcel of this great, brown land. The Australian bush even NEEDS bushfires to sustain itself – that’s why they evolved over millions of years to have protective bark, seed pods that only open by exposure to fire and why eucalypts drop so much fuel on the ground.

That’s what we were told at school 60 years ago and it still stands despite computer modelling (a very dodgy science) telling us otherwise.

Indeed one of the featured art pieces at the Arboretum depicts the words “Wide Brown Land”. The land it is on was razed by a bushfire in 2001 (not the 2003 bushfires as the a lot of people believe).

I’ll bet most of the people criticizing her perceived lack of support for contemporary lefty dogma are the same people who have truffle infused wild mushrooms with their daily latte.

Give her a break as the truffles you consume may come from her farm so she is really has your interests at heart.

And finally, what about her high profile Labor opponent? “Kristy McBain is a nice person and that’s it,” she says. “I believe I am the person who can deliver for Eden Monaro.”

Wow – you can tell how that was delivered through gritted teeth can’t you. A good first step for building rapport with the community is to be genuine in whatever you say. Doesn’t take much to say 2 or 3 sentences with genuineness behind them to show that. Instead she rolls out something as pathetic as that.

Another climate change denier, and by the looks of what has been said in the past by her and her husband within the SSM debate, another religious nutter. No thankyou.

We really need to be voting for progressive, inclusive and evidence-based, rational and logical politicians. While they are far and few between, they do exist. She is not one of them.

Listened to interview with Leon Delaney on 2CC Monday and was very underwhelmed, was very evasive on climate influence on the summer bushfires etc. Sounds like another another LNP pollie which is what we DON’T need. Kristy McBain sounds far more progressive IMO

Another LNP member who has a family background of religious persecution and is happy to discriminate against the LGBTQI community. Do they not see the hypocrisy….. she won’t get my vote.

Funny (not really) listening on the call last night talking about the devastation of the region around her farm one minute and denying there’s an issue with the current climate change policy the next…..

Mje Mje -? Do not forget the bush under growth / fuel – that has not been maintain for the past 30 years in a lot of cases

Iain Saunders can you elaborate

Darcy Ryan under section 44 you can’t run as a candidate if your are currently employed by the govt or are receiving govt funding.or your a foreign national etc.

Iain Saunders annnd which part how, what why, when.

Iain Saunders your making the claim. The burden of proof is on you. 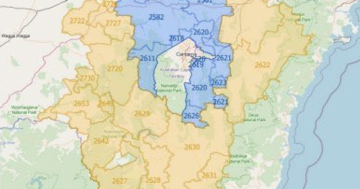