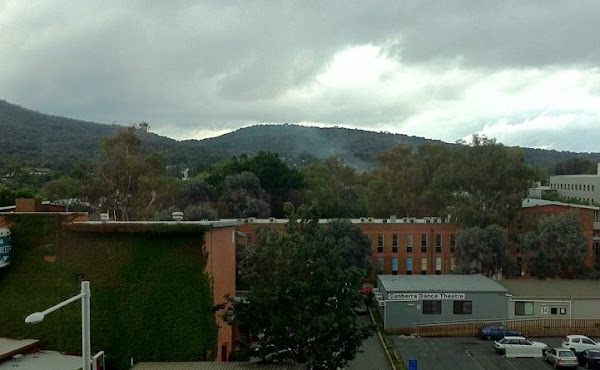 ACT Fire & Rescue on scene at a structure fire in a building at the Australian National University on Science Road, Acton.

Crews investigating the building to find the source of the smoke.

People have been evacuated from the building as a precaution.

Building is the Birch Building on Science Road.

Fire believed to have started from two experiments in a fume cupboard.

Approx 120 people from the Birch Building have been evacuated. No other evacuations from the ANU at this stage.

Fire has been extinguished in room of origin.

Fire has been extinguished.

Fire was contained to room of origin on the upper floor of three-storey building.

Heavy smoke logging was recorded on top and lower floors.

Minor heat and smoke logging to three storey building with extensive damage to room of origin and roof space above.

ACT Fire & Rescue have now departed the site where the fire took place and have handed the scene over to ANU security as final clean up operations have been concluded.

As usual, if you’ve got photos send them in to images@the-riotact.com .

According to the email sent to all ANU staff, the clean-up started last night, which suggests it may not be too bad. When the 2005 explosion/fire happened, it was a week or so before they let anyone back into the building, and that was just a few tech staff with respirators on to retrieve everyone’s wallets and keys. It was another week or so before any clean up started. I still have a copy of piece of paper ComCare made me sign afterwards saying I didn’t know what was in the area where the explosion occurred and that it wasn’t my fault. They never did figure out exactly what it was that started the 05 fire.

My favorite was the explosion that resulted in blue smoke spewing out of the building. They evacuated us from the Refectory Bar so fast that we were allowed to take our drinks with us. I still have that glass…

ANU Chemistry has been Making Science Fun™ for far longer than that. 😉

Looks like someone’s really screwed the pooch on this one.

Shaz Ray - 6 minutes ago
Jill Hiscock in what countries? View
Shaz Ray - 7 minutes ago
What happened to the 62% vacc? Now it's pfizer? View
Nick Savino - 1 hour ago
Rick Jackson they have come out of the woodwork... View
News 16

Daniel Bryan - 1 hour ago
This, Oaks, A+A, Grand Central, Ivy, and Trilogy definitely bringing more residents into the Woden valley isn't a bad thing.... View
Michael Jayfox - 2 hours ago
Mat Barber please explain how you think that new parking ramps will stop it from being an eyesore View
Tristan Wellens - 2 hours ago
Will only rent for about $500 a week per smaller unit 👌🏻 View
Food & Wine 4

Josh van Limbeek - 5 hours ago
What a great article! My Mum is a Red Hatter and she has so much fun too ❤❤ View
Jo Jo Joey - 6 hours ago
Barbara Bennett, I love how much enjoyment your ‘red hatters’ gives you’ 🎈💜❤️💜 View
Property 27

Elroy Jones - 5 hours ago
Peter Bee there are a lot of places it could go. Majura the most recent I’ve heard. View
Christopher Cuba Rabanal - 5 hours ago
Better lighting around the carpark View
Andy Sell - 6 hours ago
2 words mate, lite rail View
News 17

Mookie Moo - 6 hours ago
Assuming this means 80% by Oct within the adult population only? Because roughly 20% of the population would still be kids, w... View
Community 35

Theresa Rowan - 7 hours ago
Margaret Smith was in my class at St Clare's a gentle soul RIP. View
show more show less
*Results are based on activity within last 7 days

@The_RiotACT @The_RiotACT
Michelle Heyman's stunning return to football began with a simple question on Instagram: “Hands up if I should make a comeback to the W-League?" https://t.co/UNn8rDWuj3 (5 hours ago)

@The_RiotACT @The_RiotACT
The 2021 Australian of the Year is Grace Tame. Grace is an outspoken advocate for survivors of sexual assault, particularly those abused in institutional settings https://t.co/Q6nMb1PGRL (5 hours ago)

@The_RiotACT @The_RiotACT
Times have been ruff, so @QTCanberra has rolled out the pet-friendly red carpet & opened its doors to allow furry best friends in their luxury hotel rooms https://t.co/V89hSF18w9 (6 hours ago)