Canberra police are investigating 12 fires (out of 32 since the start of December) that they believe are arson. While they were announcing this, another three fires started up in West Belconnen. I took some pictures of the one that was just off the west edge of Dunlop and Macgregor. 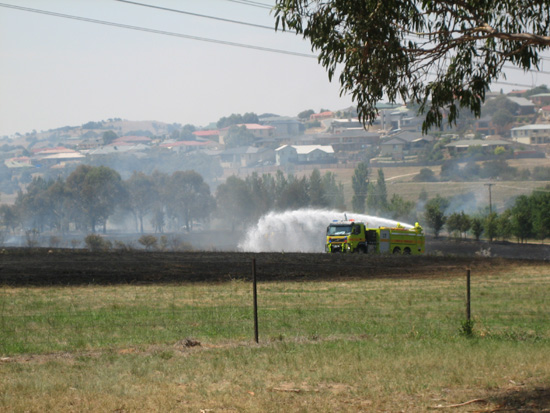 No property was threatened by this grass fire and it was just about out at 3ish this afternoon, partly in thanks to the two helicopters that kept bombarding it (plus all the fire trucks that were out there — I didn’t get an exact number). 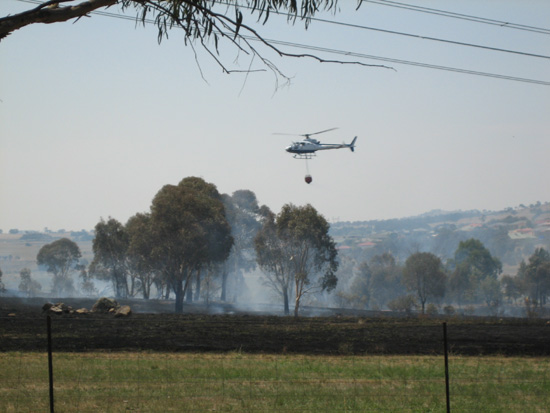 And the locals were out in force watching the firies’ progress and taking plenty of photos and video of their own. 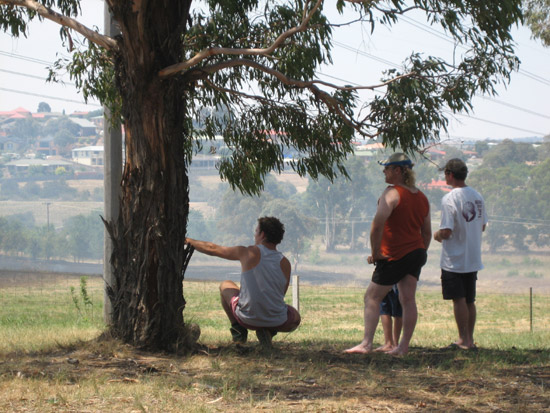 I just wonder if the fires are being lit by the same guys that lit up the 15 YO kid in Latham the same day (with aerosol can and lighter) – most likely what the ‘stakeout’ mentioned by andy was too.

I don’t think it would have been school kids, the fires were lit in a path from Kambah to Dunlop (possibly College kids though).

its not doubt the sam person / s that has been lightng them for the last couple fo seasons…
They need to be hung!

4 releases on bail with a stern warning not to do it again or you’ll get more warnings. Thats standard judicial process for everything up to and including murder.

What’s the current penalty for lighting a fire?

Maybe they were panicking a bit, Thumper?
Didn’t want it to get worse

The chopper is overkill for a small grass fire….

Then again, if it’s available….

That new CAFS unit looks great but pity you cannot really use it off road. (Compressed Air Foam)

This stuff is getting serious. Those that have lived through a serious bushfire will know what I mean. Houses will be lost and lives extinguished.
If you really need a buzz then go to one of those places at Fyshwick and get your jollies off without endangering other peoples lives…Please

We will be looking for you, fnaah. Then your name will be fnaaarrgghhh!

(apologies if the locals pictured are neighbours… oops)

what odds on one of the locals pictured being the firebug? (although i guess you’d have to be pretty stupid to stand and watch, but then again, we’re talking about an arsonist, who only really lights a fire so they can watch it burn…)

assholes.
thats why the cops were stakin out the bridge on southern cross drive near the entry to the storm water pipes..

Illyria Tyers - 56 minutes ago
That's very young ... #RIP.... View
Vanessa Schultz - 8 hours ago
Too young, and always a happy football mad kid, I grew up across the road in Hopetoun Circuit Yarralumla from the McInnes RIP View
Carol Jean - 18 hours ago
So sad, a true gentleman View
News 2

Acton - 2 hours ago
This is not the first time defence personnel have been caught mishandling classified material, but the harsh circumstances of... View
Spiral - 2 hours ago
"“J” has well-grounded fears that he might be targeted by foreign intelligence agencies" That certainly sounds like he ha... View
News 36

Julie Macklin - 3 hours ago
James Dof, I take the train, because I like the train much more than the bus. I can get get up and move around, plus there's... View
James Dof - 16 hours ago
I take the bus to get to the bus terminal with luggage and like I said it's 45 mins to civic and an hour less travel on the b... View
Julie Macklin - 16 hours ago
James Dof A bus every 15 minutes from Civic. In practice thought I imagine most people, even if there is a regular bus from w... View
News 27

rhona1212 - 5 hours ago
I would like to recommend Canberra Blocked Drains Services for not disappointing us. Two plumbers came before them but failed... View
Business 4

Sylvia Brooker - 23 hours ago
Thanks Leong kitchen, you will be missed by many. All the best for the future. View
Property 5

Felicity Copeland - 24 hours ago
Maryanne he remembers! View
show more show less
*Results are based on activity within last 7 days

@The_RiotACT @The_RiotACT
“Witness J” speaks to Genevieve Jacobs about being incarcerated with Canberra’s sex offenders, his anger and his fears about our nation’s growing secrecy https://t.co/0X7XNZbVN4 (3 hours ago)

@The_RiotACT @The_RiotACT
The Raiders marked Josh Papalii's 200th game with the Green Machine with a 22-6 win over the Storm in Melbourne. It's the Raider's best season start in 15 years and already has fans dreaming that Ricky's men can go one better in 2020 https://t.co/v64nqFaA2Q (5 hours ago)