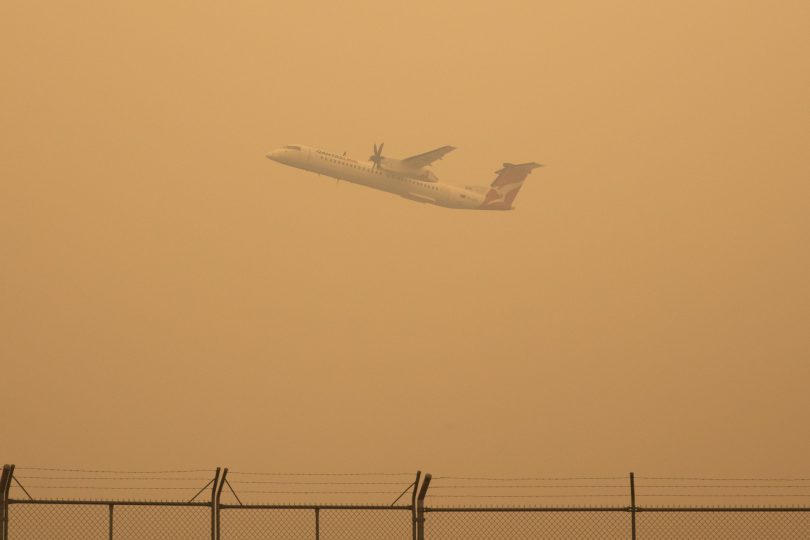 Researchers are hoping to discover the impacts that extended exposure to bushfire smoke can have on asthmatics and people with chronic obstructive pulmonary disease (COPD) in a new study being conducted by the ANU.

With Canberra experiencing extended periods of hazardous air quality due to bushfire smoke in the surrounding regions, the health impacts on Canberrans, especially those with respiratory problems, cannot be quantified so far.

Leading environmental health expert from the ANU Professor Sotiris Vardoulakis has said that there is no safe level of long-term exposure to bushfire smoke, but studies so far are unable to conclude what constitutes ‘long-term exposure’.

“Bushfire smoke is a major public health concern. The very small particles in bushfire smoke can penetrate deep into the respiratory system inducing inflammation and even translocate into the bloodstream,” Professor Vardoulakis said.

“For most people, it is like smoking a few cigarettes a day – it is increasing the risk of developing lung and heart disease in their lifetime.

“But some people, such as those with asthma, the elderly, young children and pregnant women, are at a higher risk and it is important to know how to minimise their exposure to air pollution.”

ANU Emeritus Professor Janette Lindesay from the Fenner School of Environment and Society says the level of irritation comes down to two factors: the concentration of the irritant and the length of the exposure.

“If it is something you can breathe in for short periods of time then you are going to be fine, but if you breathe it for longer periods, or you have extended exposure or repeated exposure, then it can start to have an impact,” Professor Lindesay said.

“The consequences for people with asthma is that there are irritants [in the smoke], and the body can have a reaction, which in an asthmatic person we call an asthma attack. That is the body trying to get rid of an irritant, and it is an overreaction.

“I have heard stories about people who are not known to be asthmatics experiencing asthma attacks after being exposed to bushfire smoke.”

Hazardous air quality in Canberra has left many struggling to breathe.

However, the problem with extended bushfire smoke is that we do not really have a full understanding of the long-term effects that repeated or prolonged exposure can have.

“We actually do not really know [about long-term bushfire-smoke exposure] because as far as I am aware, I do not know that there have been any in-depth, critical or population health studies into exposure like we have been getting now,” Professor Lindesay said.

“That is something we will find out more about as we go, but it is a concern.”

Researchers at ANU are trying to figure out what some of these impacts could be. Focussing on Canberra, where the topography can mean smoke gets trapped and lingers for longer, this new study will target people with respiratory problems.

Lead researcher from the ANU College of Health and Medicine, Nick Coatsworth, says it is important to assess the community-wide impact of the smoke.

“There is very limited research on the effects of bushfire smoke at a community level,” he said.

“We have had a whole community exposed to some really severe bushfire pollution which is why we sat down two weeks ago and decided this is an opportunity we had to take … very, very quickly.”

Because the extent and exposure to bushfire smoke are unprecedented in Canberra, Mr Coatsworth says they are expecting a range of results.

“Whatever results we get are going to be important,” he said.

“Either we will find that there is not much change at all in people’s lungs and their function, in which case it will be reassuring for a lot of people, or it may find that there have been some subtle effects on lung function.

“We are not focusing on symptoms. We are going down deep to find out what is happening in the very small airways in their lungs.

“If the smoke has created some changes then it is something that we need to know about for future planning, and it helps us treat our patients if they are exposed to these events in the future.”

The experiment will track 60 participants with asthma and emphysema over the next three months to determine if there has been any lasting impact on lung function.