Fitzharris would be our Health Minister: Barr (cute baby alert) 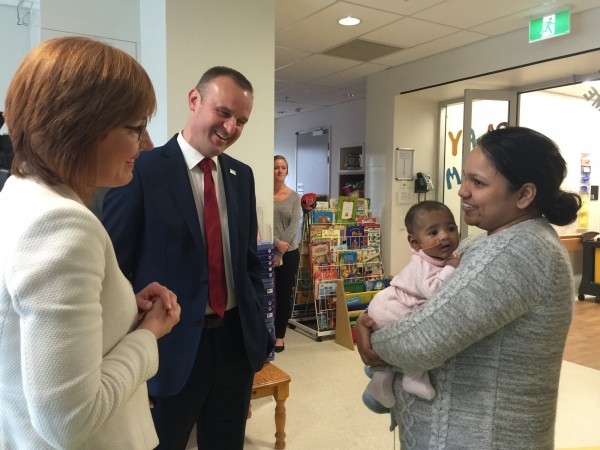 Chief Minister Andrew Barr has announced during a media event at the Centenary Hospital for Women and Children this afternoon that Assistant Health Minister Meegan Fitzharris will succeed retiring MLA Simon Corbell as Health Minister if Labor is re-elected next month.

The pair answered questions on how their $650 million hospital expansion commitment announced earlier this morning will be funded, and posed for the customary hustings shots with a cute baby, getting that election essential out of the way within hours of the start of the campaign proper.

Neither of them kissed the baby, though Mr Barr did look rather clucky when he gave her a pat at one point.

The Chief Minister opened his remarks to media during the event by anointing Ms Fitzharris as his health spokeswoman.

“I will be pleased to appoint Meegan as Health Minister in a Labor Government should we be re-elected in 37 days time,” Mr Barr said.

“Meegan will take on those responsibilities as health spokesman during the campaign.”

Asked whether she’d had the opportunity to put her stamp on today’s announcement for Labor, Ms Fitzharris said there were certainly components she was particularly interested in, including the expansion of programs for children and the family assistance fund.

“I’ve been trying on a number of fronts to work with families who’ve been in that exact situation,” Ms Fitzharris said.

“The paediatric palliative care nurse in the budget this year exactly came out of conversations with families in those situations, the assistance fund was another one.”

Ms Fitzharris said Labor would be rolling out a number health commitments in the next few days.

“There’s a few in there that I hope have been consistent with what I’ve been working on since I was first elected as Assistant Health Minister,” she said.

As for how the commitment would be funded, Mr Barr, who is Treasurer as well as Chief Minister, said the forward estimates contained provision for capital projects that the Government could draw down on.

“We can also borrow at what are historically low interest rates at this point in time,” he said.

“We will be paying back the Mr Fluffy loan through the proceeds of the sale of those properties. That means that debt is paid down, and it frees up capacity on the Territory balance sheet.

“We also, of course, retain the capacity through our land release program to dispose of some assets that free up capital to invest in health infrastructure, education infrastrucure and transport infrastructure.”

He said these three factors combined over the forward estimates period to provide the Territory within current estimates with capacity to allocate the money for the health project.

“It’s not a free for all, and certainly as a territory we can’t afford to waste $300 million on nothing, but because we are not doing that [tearing up the light rail contracts], we have $300 million more than the Liberals to invest in health infrastructure,” Mr Barr said.

Ms Fitzharris took over management of the Government’s light rail project from Mr Corbell in July, and is expected to replace him as Mr Barr’s deputy after the election irrespective of the result.

Fitzharris is on the right. Barr probably won’t even be Chief Minister of the Labor Left get the numbers.

Is this change because of the conflict-of-interest husband issue? I would have thought transport would be the senior portfolio if they’re bringing in light rail …

Ric Hingee - 29 minutes ago
Ella - I am surprised you have any money to donate to Labor after paying all the excessive taxes, charges and rates that the... View
Ric Hingee - 32 minutes ago
Bethany Williams The minority parties and independents needed to find common ground and run as a team. Otherwise they are pro... View
News 52

Evan Hawke - 2 hours ago
Darron Marks I totally agree that the roads in Gungahlin use to be shocking and roads like horse park drive needed upgrading.... View
Darron Marks - 13 hours ago
The increased spending to duplicate some of our arterial roads has made a difference you are correct. But to say there wasn't... View
Evan Hawke - 1 day ago
Glory Hammer I totally agree that every area needs politicians who fight for there areas. Most of the politicians in my area... View
Property 10

thebscaller - 7 hours ago
Joke of a leader and party. They are making some bold statements and promises that don’t add up. There is no way these prom... View
Acton - 9 hours ago
A conservative is someone who is averse to change. The Labor Party has now held government in Canberra for 19 years, proving... View
JS9 - 11 hours ago
"The problem would appear to be how to pay for them and it’s not easy to pin down Mr Coe on where the money will come from... View
ACT Election 12

Caz Ireland - 10 hours ago
Anyone remember when Labor shut down all those schools about 15 years ago? They’ve had 20 years in government so their reco... View
Keith Cheetham - 1 day ago
Pork barreling at its best as Labor does. And then dont initialise it. View
Bronwyn Wilson - 1 day ago
Where are e teacher librarians going to come from? There are very, very few in the ACT - that’s why so many schools don’t... View
Lifestyle 9

A network of more than 150 km of mountain bike trails near Mogo will be a game-changer for the South...
News 52

I am thrilled when I spot the shining blue beacon that is the Short Eats Sri Lankan Food Van atop...
Business 6

The owner of a gymnasium in Queanbeyan says she is losing customers to gyms in nearby Fyshwick and Kingston because...
*Results are based on activity within last 7 days

The indicators are all there: an abundance of corflutes on the roadside, piles of political flyers in your letterbox, being...
News 52

@The_RiotACT @The_RiotACT
School holidays are back, and from racing model cars to racing around the Tough Nutterz Inflatable Course, there’s plenty on in Canberra this week https://t.co/LFEwDETxzW (40 minutes ago)

@The_RiotACT @The_RiotACT
Around 230,000 people - more than 50% of the current ACT population - would have to move to the Territory this financial year if the Canberra Liberals were to pay for their election promises using their 'grow the pie' model, according to ALP analysis https://t.co/KfWNlGSzz8 (2 hours ago)

@The_RiotACT @The_RiotACT
On The Campaign Trail today, the Liberals promise to freeze commercial rates, Labor splashes on schools in the north, Rattenbury backs greens loans for landlords and what your vote's really worth to the major parties https://t.co/9zET4vntyX (3 hours ago)