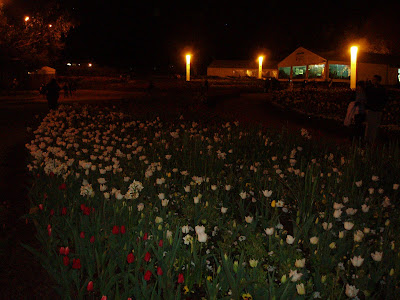 Well tonight, Thursday, might have been the pick of the nights to visit Floriade Night Fest 2009. Wednesday night they were showing Sparkly Vampires, plus being windy and cold. From Friday night theres going to be a cold front and strong winds coming through with possible snow on the ranges over the weekend. There was a decent queue to get in but it moved very quickly. Looks like they’ve learned a lot from last year, still I’m glad I didn’t pre-purchase tickets ($21 for an adult).

But besides the weather the actual visit to Floriade Night Fest was good fun. The fire twirlers were wandering around shortening their lifespans. The tall people were tall and dancing. The flowers were lit up but didn’t really come across as special at night as they do during the day.

When I originally looked at the line up of screenings for Night Fest I’m sure they were showing short films, Trop Fest replays and other fun things that you didn’t have to concentrate on the whole way. But looks like they’ve changed it to feature films for this year, which I don’t feel work as well for festival showings.

The food and beverages weren’t as expensive as I thought they would be. The movie sound and screen worked well and could be viewed easily even with people wandering around and chatting. There were good clear lines of demarkation between those who brought chairs and those who brought rugs so no disputes arose. Best to bring two rugs as it was pretty cold even tonight.

Didn’t hang around for much of Pyrophone Juggernaut (flame throwing multi-octave organ) but I like the concept.

If you’re willing to brave the weather then Floraide Night Fest continues until Sunday 27 Sep 2009 with showings of Hairspray, The Devil Wears Prada and Ratatouille.

And some more photos. 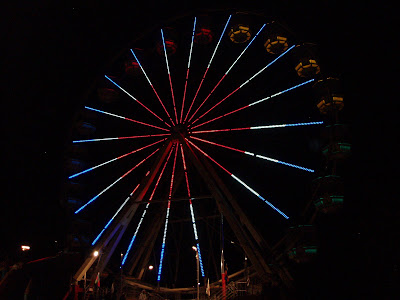 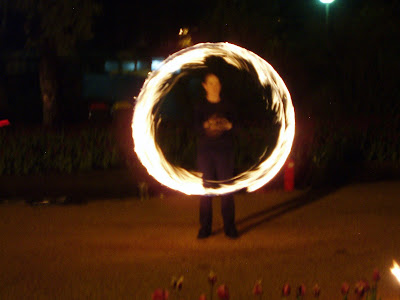 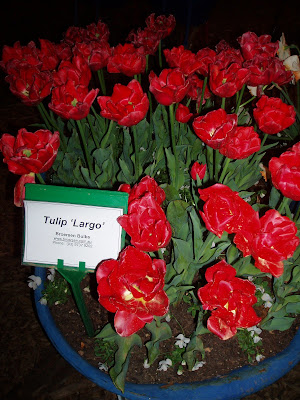 Watch out for Security 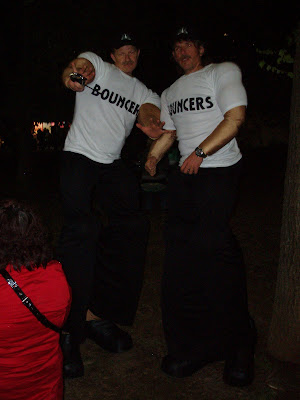 And the disco dancers 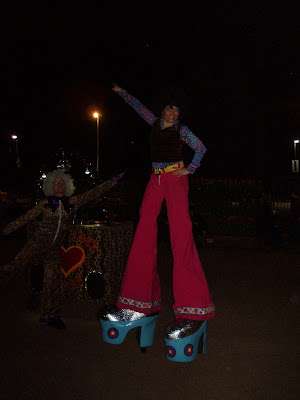 And lastly the Pyrophone Juggernaut. 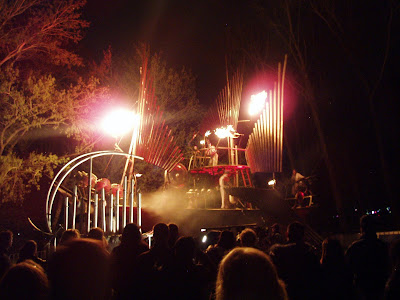 Trashman, I’d be pretty annoyed too if I had to wait an hour in the rain, but I’d say it was your own organisation that was pathetic. I was completely aware that Nightfest started at 6:30, and that Floriade was closed between 5:30 and 6:30. Maybe I’m just reading things a bit more closely than you.

Oh for pre-fence days when Floriade was always open. We always went at least once at night because of the beautiful lighting, and the wonderful perfume of the flowers. It was simply beautiful, and there was no need for any other “entertainment”. Enjoying the ambiance was simply enough.

Saturday evening at Floriade was a total bloody debacle (and it wasn’t JUST because of the weather).

Arrived with my fiancee (visiting from the US) at 5:15pm (walked, didn’t drive) and picked up tickets to Night-Fest. Then told we had to leave at 5:30pm and come back at 6:30pm. Told by several Floriade employees to head to the cafe/restaurant outside the main entrance to wait. Cafe/restaurant all CLOSED. Asked the gate staff if we could wait somewhere inside out of the weather and was given an empatic ‘No’. So had the choice of hanging around outside for an hour in freezing conditions or sitting in an absolutely filthy bus shelter (the norm for Canberra). Pathetic organisation.

Fifteen minutes of icy winds and rain quickly had us in a taxi heading home. Just one more prime example that if you wanted to give Australia an enema, then Canberra would be where you’d stick the tube.

Expo 88 called, Floriade. It wants its oh-so-wacky street performers back.

We took a picnic of nibbles and wine, it was so lovely. But having to concentrate and not talk for a whole movie proved a task too difficult for us this year. Such a shame because it would otherwise be the perfect casual setting for a catch up with friends as well as a bit of good old fashioned ‘cultcha’ 😀

Hey organisers of Floriade…bring back the short films next year.

Just a correction, it’s $20 a ticket for adults, plus a $4.95 booking fee which you can’t avoid. I’m going tonight provided it’s not raining. The movie sounds good but I was keen on wandering around a bit and seeing what’s there – I agree shorts would be better. Can you bring your own food? What about alcohol? I was thinking of a gourmet picnic under the stars.

I think strings of fairy lights would look pretty through the flowers also.

Il Agree with the fact the flowers don’t look as good as in the day, but they still look good. they are lit with these blowup light towers which do quite a good job compared to getting blinded by LED’s from last year.

The feature films are different to last year, but they are limited to the movies released by roadshow (i think thats their name) due to the rights etc. they are displayed on a nice big blow up 14m screen.
Friday night film is hairspray.

The Pyrophone Juggernauts are a good show and a good bunch of guys to.
They have a good finally which involves 2L of explosive liquid being thrown into the air.
Its unfortunate to see people leave just before the pyro guys because its a good show.

Id recommend bringing chairs if you want to watch the show as they ARE NOT provided, they do provide some tarps to sit on though.

Id recommend not eating at the stalls by stage 88, they gave some people bad food a week or 2 ago. The other stalls are fine and i eat from them every night.

There is also alcohol available at various places around including the glow bar and lotus lounge.

Kids entertainment is provided including a guy from questacon who dose a good job.

btw yes i am working there every night.

David Pollard - Independent for Yerrabi 2020 - 5 hours ago
Kylie Robinson I’m concerned with mental health support for young people, particularly - but not only - through schools. I... View
Jack Hearps - 11 hours ago
Christopher Stuart Veilands compared to other authorities ... shires etc ... ok.... View
Jack Hearps - 11 hours ago
Bethany Williams your very aware ... the LP is not what it was progressing to be ... it has been taken over by the religious... View
Business 4

Tara Murray - 20 hours ago
Jason Livingstone not to mention the cull after that which in my opinion wasn’t necessary... View
Jason Livingstone - 21 hours ago
What was the number of wildlife lost due to the fires? 2020 has not been good to wildlife.... View
ACT Election 5

Liv Ruth - 23 hours ago
Hi Jim Jim, if that is Covid debate you are talking about, this should be applied against everyone’s next rates invoice in... View
show more show less
*Results are based on activity within last 7 days

@The_RiotACT @The_RiotACT
In the late 1980s, when restaurants flourished in Goulburn, Danny's Brasserie made such a splash it’s still talked about today, writes John Thistleton https://t.co/bVLciHyym9 (25 minutes ago)