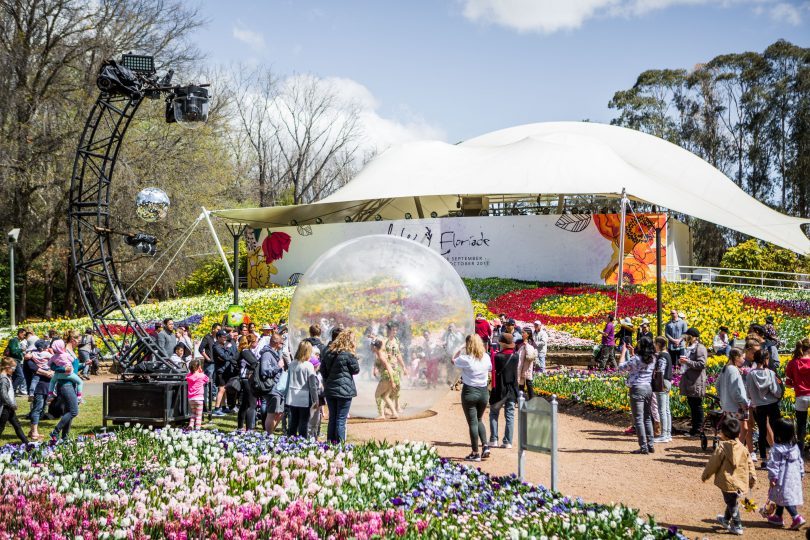 EventsACT is adamant that the upcoming Floriade will not have to be pruned or downgraded after a review of a $1.2 million overspend on last year’s event revealed significant deficiencies in financial management.

The $1,254,971 overspend came to light when invoices started coming in and an independent review was ordered to get to the bottom of it.

It found that a contract register had not been maintained, there were lack of contracts in place for significant expenditure, there were payments of amounts outside of contract amounts and some contracts were unsigned.

It also found a lack of event specific financial reporting and that reconciliation and review of revenue sources were missing.

The review noted that there were possible calculation errors made in a budget spreadsheet that could have also contributed to the overspend.

It made a number of recommendations relating to financial controls, including reviews of procurement processes and transactions, and value for money assessments of major contracts.

But Protiviti noted that there had been an almost complete change in staffing within EventsACT since Floriade 2017, significant changes made in the financial management controls and procurement training of staff.

EventsACT Acting Director Jo Verden told ABC radio that there would not be any cuts to this year’s Floriade and that measures had been put in place to ensure there was strong financial management, strong controls around procurement and contract management to avoid a repeat of last year’s overspend.

As well as this, leadership of the event has been outsourced, with an experienced executive producer brought in to work closely with the Floriade team.

Ms Verden was loathed to criticise last year’s team which was solely responsible for the event, saying the different approach was a result of the Major Events Strategy released in September last year.

“That was to enable us to take a more strategic approach and bring in high-level expertise to assist with the delivery of those events. It allows our team to then focus on other specific aspects of running events in the city,” she said.

Ms Verden said that with measures in place, tighter controls, new staff, and a very experienced and skilled executive producer working with the team, Floriade would continue to be a high-quality event.

“I am confident we’ve got the right people focusing on delivering the right outcome for this year’s event,” she said.

EventsACT was able to recover some of the overspend through revenue from other events including Enlighten.

Will you be attending Floriade this year? Comment below.

Ghanaian Aussies - 5 minutes ago
That is hypocrisy in the highest degree. If we are talking about inclusiveness and progressive as Canberrans, does that exclu... View
Charny Barney - 47 minutes ago
The Progressives are also dodgy, telling people they support light rail yet their Yerrabi candidate Mike Stelzig tells people... View
Charny Barney - 48 minutes ago
Alistair is loose with his language, and with what he really plans to do. He clearly has ultra conservative positions that un... View
News 5

Kosher Ayatollah - 2 hours ago
Robson Rotation is why we need so many corflutes. Candidates are fighting within their own parties for recognition, not the p... View
Business 3

Liv Ruth - 9 hours ago
Hi Jim Jim, if that is Covid debate you are talking about, this should be applied against everyone’s next rates invoice in... View
Property 14

Nicole Vassallo - 9 hours ago
Laura yes exactly!! Lovely family that owns and built this place, and such a stunning home... 😍 View
Laura Peppas - 10 hours ago
Nicole your neighbours? 😱😍... View
show more show less
*Results are based on activity within last 7 days

Demolition of the old Strathgordon Court public housing complex in Lyons has begun, with the heavy machinery moving in on...
Opinion 85

Floriade to bloom in the suburbs this spring

@The_RiotACT @The_RiotACT
Sustainability and public safety issues are a major focus for Master Plumbers ACT in the upcoming election https://t.co/TbTjkFHMWv (32 minutes ago)

@The_RiotACT @The_RiotACT
ACT Policing is close to making an arrest in relation to the stabbing death of an 18-year-old male at a Weston skate park in the early hours of Sunday morning https://t.co/0bG1qzZfo3 (45 minutes ago)

@The_RiotACT @The_RiotACT
From generators to vacuum cleaners, online charity @GIVIT_AUS is getting much needed help to bushfire affected communities around the region https://t.co/t6pbVFQg7x (3 hours ago)