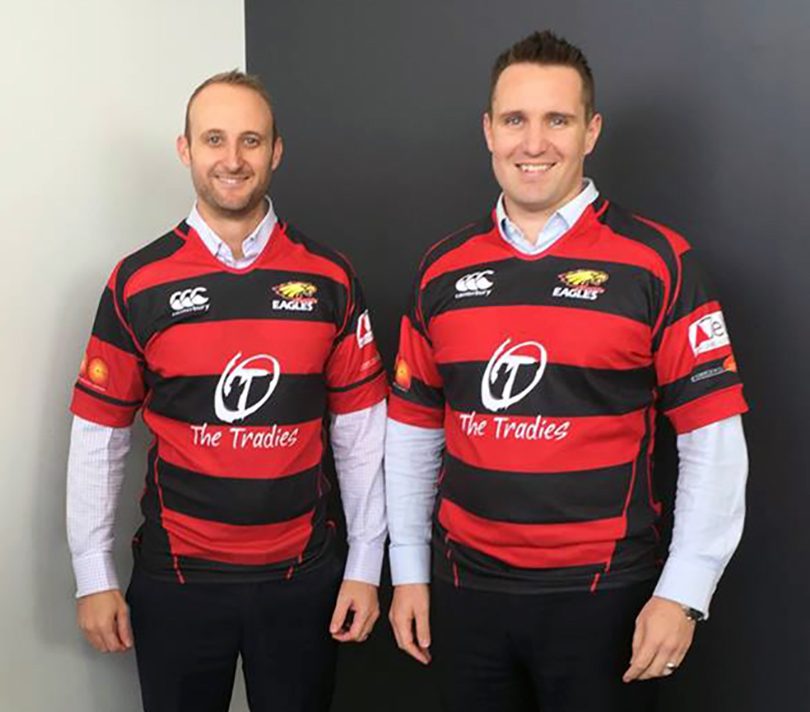 Ever since he was able to walk, Ben Faulks has spent nearly every Saturday afternoon on the footy field, using his talents for the Gungahlin Eagles rugby club.

Thirty years on, Ben might not be out on the field with the footy in hand but the owner of Ray White Canberra, along with his brother Sam, has been showing his passion from the sideline as a sponsor ever since he opened his business 10 years ago.

As a five-year-old, Ben started out as a ball boy, biding his time until his body matured enough for the rigours of rugby. He went on to pull on the beloved red and black Eagles jersey as the first-grade captain and eventually club captain.

“I grew up around the club and it has been a part of my life as long as I can remember really,” he said.

“My dad was a former president of the club and my brother and I used to play first grade for Gungahlin. I went on to coach the Colts side and further down the track I became a committee member as well.”

Even though work keeps him from playing the game he loves, he still spends the cold winter weekends on the sideline cheering on his beloved Eagles.

“I was there last Sunday and I saw them get up over the Owls, which was great,” Ben said.”The Colts also won through to the next stage of finals as well, which is really good and equally as important to show our future is strong.”

Gungahlin is one win away from returning to the grand final in the local premier rugby union competition, as the Eagles’ fairytale run continued last weekend.

The Eagles were moored to the bottom of the ladder half-way through the season but a late-season resurgence saw them claim the final playoff spot on the last day of the season. They’ve now won seven of their past eight games and will play for a place in the grand final next weekend when they face premiers Tuggeranong Vikings on Saturday afternoon (11 August).

Ben believes Gungahlin’s success this season is due to a number of factors but most importantly the culture of the club.

“I think the club has recruited really well the last couple of years and they seem to have developed a great culture,” he said. “They have put a lot of effort into their values and determining who they are as a club.

“I got the sense on the weekend they were playing for each other, which was great to see.”

The father of two has always valued the impact Gungahlin Eagles has had on his life and is proud to support the club as a sponsor.

“Ray White became a major sponsor of the Eagles two years ago and has been a sponsor for the past 10 years,” he said.

“Gungahlin Eagles is a real grassroots organisation. The directors and the volunteers who are involved do it all for the love of the game.

“The community has always supported our business from the beginning, so we like to give back to those who have helped us.”

Daniel Pickering - 40 minutes ago
Legend. Taught me at Melba high back in the day. A great mentor! View
Ramon Montero - 3 hours ago
I do remember him when started arbitrate football, indeed very polite and educated a young person. I had the privilege to mee... View
Kacey Butterworth - 14 hours ago
I feel extremely privileged to have had Ben as a mentor, teacher and year co-ordinator throughout my high school years. He ta... View
Community 41