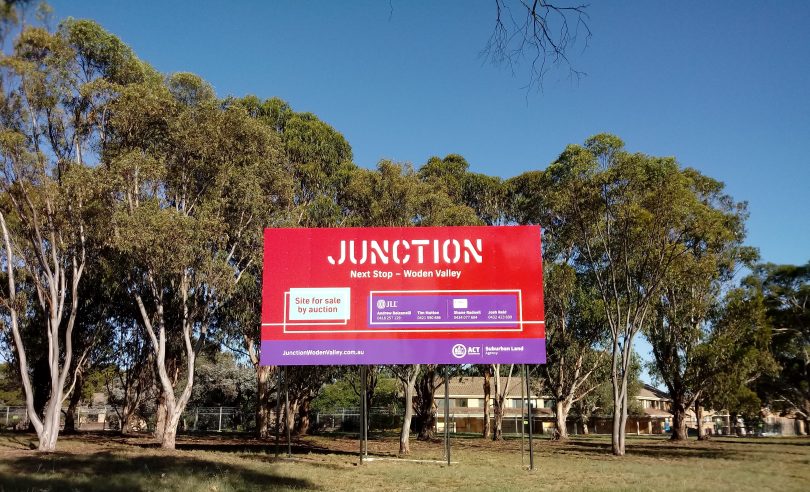 A prime development site opposite the Woden Town Centre and marketed as The Junction has been sold for $16.4 million as part of the Government’s Asset Recycling Initiative program.

The Suburban Land Agency said contracts were exchanged on the over-the-counter sale of Block 1 Section 70 Lyons a week after it was passed in at auction on 20 March, when five former public housing blocks in Griffith and Narrabundah were sold for a total of $84 million.

Further details about the sale are scant with agents unable to reveal those involved in AJP Projects or their plans for the site until settlement on 1 June.

The maximum number of dwellings allowed on the Lyons property is 492, with 70 required to be ‘affordable’.

Zoned RZ5 High Density residential, the site was marketed as a coveted position next to the Woden Town Centre.

“Locals have easy access to transport, infrastructure, and community services, as well as some of Canberra’s best schools. With the proposed second stage of Canberra’s Light Rail, Woden will be a modern and fully connected community—with property values to match,” the sales brochure said.

“Residents will enjoy some of Canberra’s finest amenities in their own backyard, with the rest of the city just minutes away.”

The sites are marketed for the SLA by JLL and Colliers International.

At least there are a small number of affordable housing spots locked in But just like the Red Hill development it looks like zero public housing sites being replaced.

Just another example of the ACT Government kicking out public housing tenants and sending them out to the distant suburbs of the south, north and west with no corresponding support services or community facilities.

franky22 - 47 minutes ago
All pollies want electoral reform that will favour their particular demographic. View
Acton - 2 hours ago
If the Greens think that lowering the voting age to 16 will result in more Green votes, they may be very disappointed. There... View
Community 2

bryansworld - 4 hours ago
Agreed, our eucalypt street trees provide ok shade in summer, and block the sun in winter. Not great for our climate.... View
bryansworld - 5 hours ago
I don't understand how the 30% canopy target can be achieved in a situation where so many people seem to want to live in an e... View
Community 32

A major landslide on a regional road between Moruya and Braidwood, in southeast NSW, has virtually landlocked residents, including health...
*Results are based on activity within last 7 days

@The_RiotACT @The_RiotACT
The derelict Commercial Hotel in #Yass is under new management, as the major shareholder of Public bar in #Manuka takes over https://t.co/ss9NhiJQLa (29 minutes ago)