Experts in buying, selling & renting
Your property, your future
21 August 2022 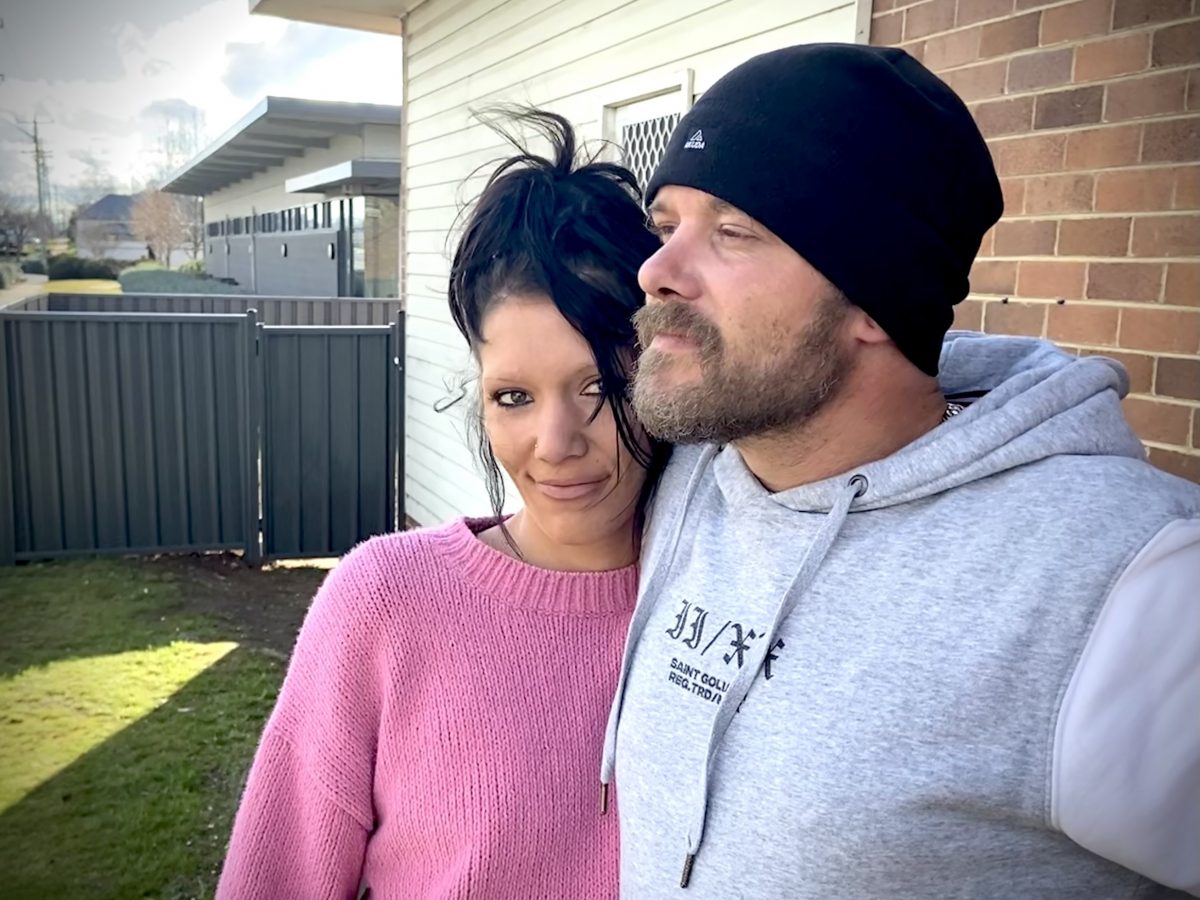 Skye and Aaron Buschmann look to the future outside their new home in Harden. Photo: Chris Roe.

As the rain rolled in and the river rose, the primitive camping ground on the northern side of the river in Wagga, where the homeless couple had lived, became inundated.

“I’m just glad everyone got out in time and there were no fatalities,” he says.

But by then Aaron and wife Skye were a world away, dry and snug in their new home in nearby Harden.

“I love it. I just love it here,” says Skye over a cuppa in their neat little two-room apartment in an old ambulance station.

“When we first got here I was having like 10 showers a day!” she laughs. 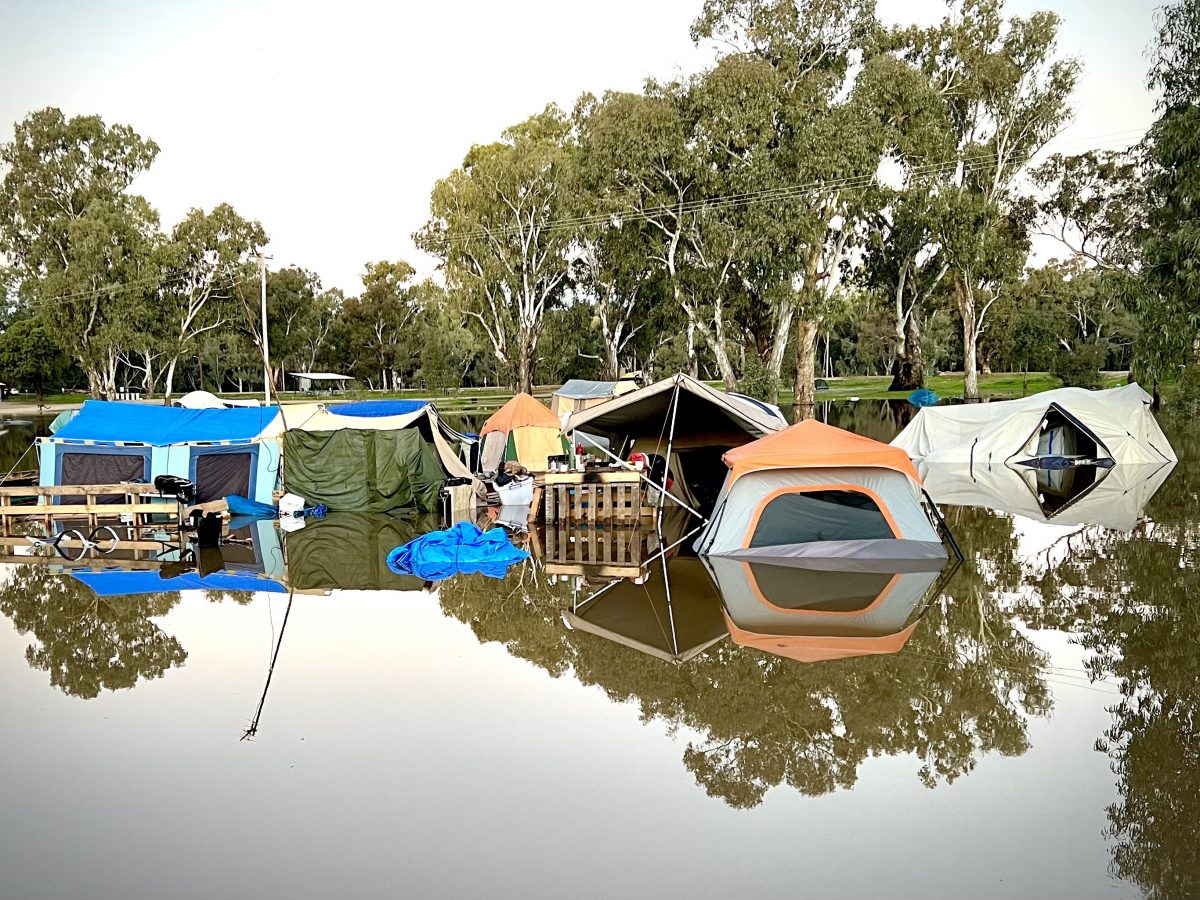 After sleeping rough for more than seven months, Aaron says they were overwhelmed when Ros and Glenn Stewart, who operate the not-for-profit Zac’s Place, travelled to Wagga to offer them a place to live.

“Ros and Glenn were like angels, you know, to come and pull us out of such a hard position,” says Aaron, his voice thick with gratitude.

“I think they saved our lives.”

Canberra couple Glenn and Ros established Zac’s Place in Harden and Yass in 2011 after working with homeless communities in Wales in the UK.

“We’ve got the passion for working with homeless people and finding solutions outside the box,” explains Glenn.

Originally from Wagga, he says media reports suggesting that the Wilks Park homeless had been rejecting offers of help prompted him to come and see for himself.

“One of our residents had just moved to Queensland, which meant we had a vacant flat,” says Glenn.

“After meeting Aaron, I said, ‘If you want a fresh start, here’s a chance for you’ – and I gave him our gym card.”

Glenn and Ros fund their work through the Hard Rock gym in Harden and Aaron called the next day to accept the offer. 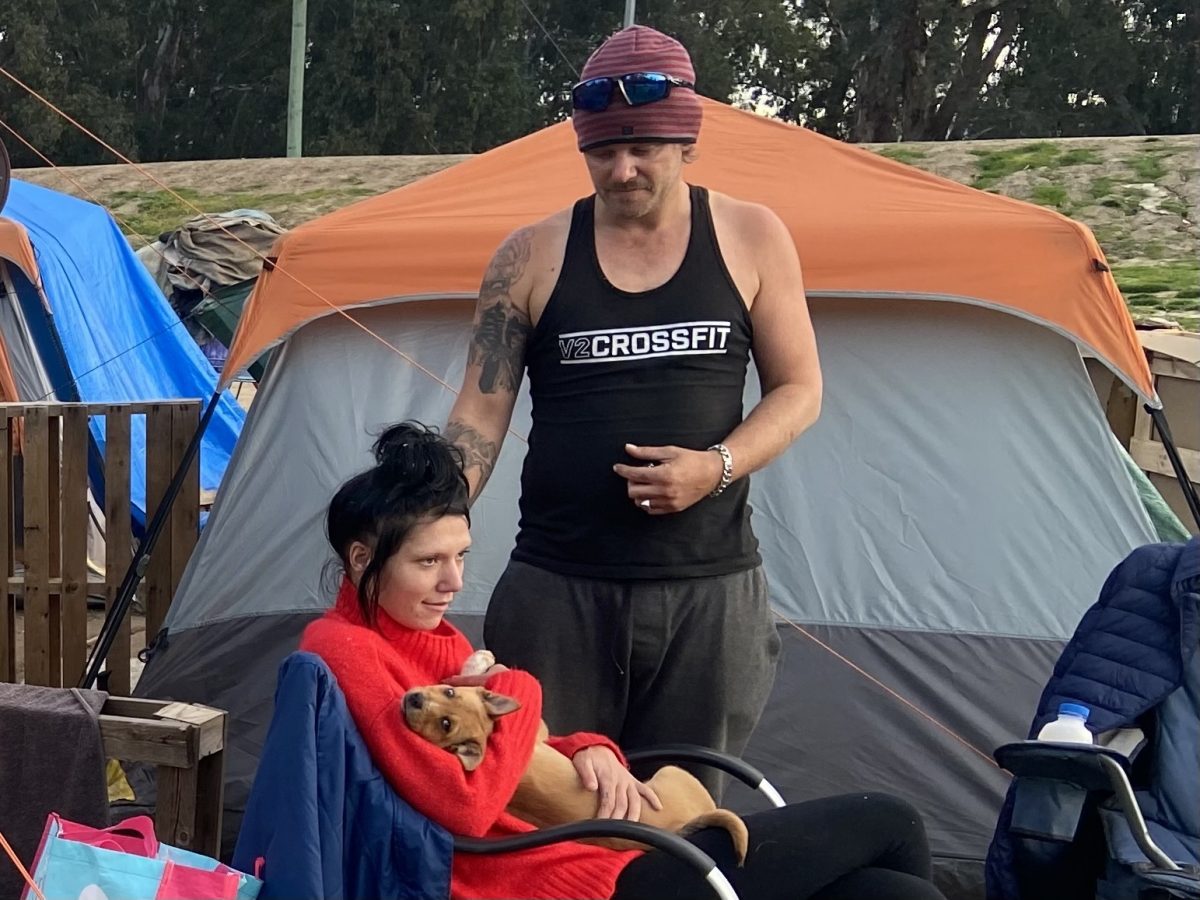 Skye, Aaron and dog Opal outside their tent at Wilks Park in July. Photo: Chris Roe.

Aaron and Skye became the human faces of Wagga’s housing crisis after they posted a photo to social media of the move-on notice issued to rough sleepers in June.

“I just thought if I address it to the media that maybe someone will see it and think, you know, these poor guys, it’s not fair because they are people too,” says Aaron.

“We just didn’t expect how warm and welcoming the Wagga community was going to be.”

The pair have now been married for two years after first meeting digitally on Instagram.

They travelled around Australia together in 2018 and 2019, sharing adventures and doing a bit of gem prospecting along the way.

Along with the good times, they have had more than their share of challenges.

Both live with poor physical and mental health and Aaron says he has ongoing seizures as a result of the drug addiction he kicked five years ago. 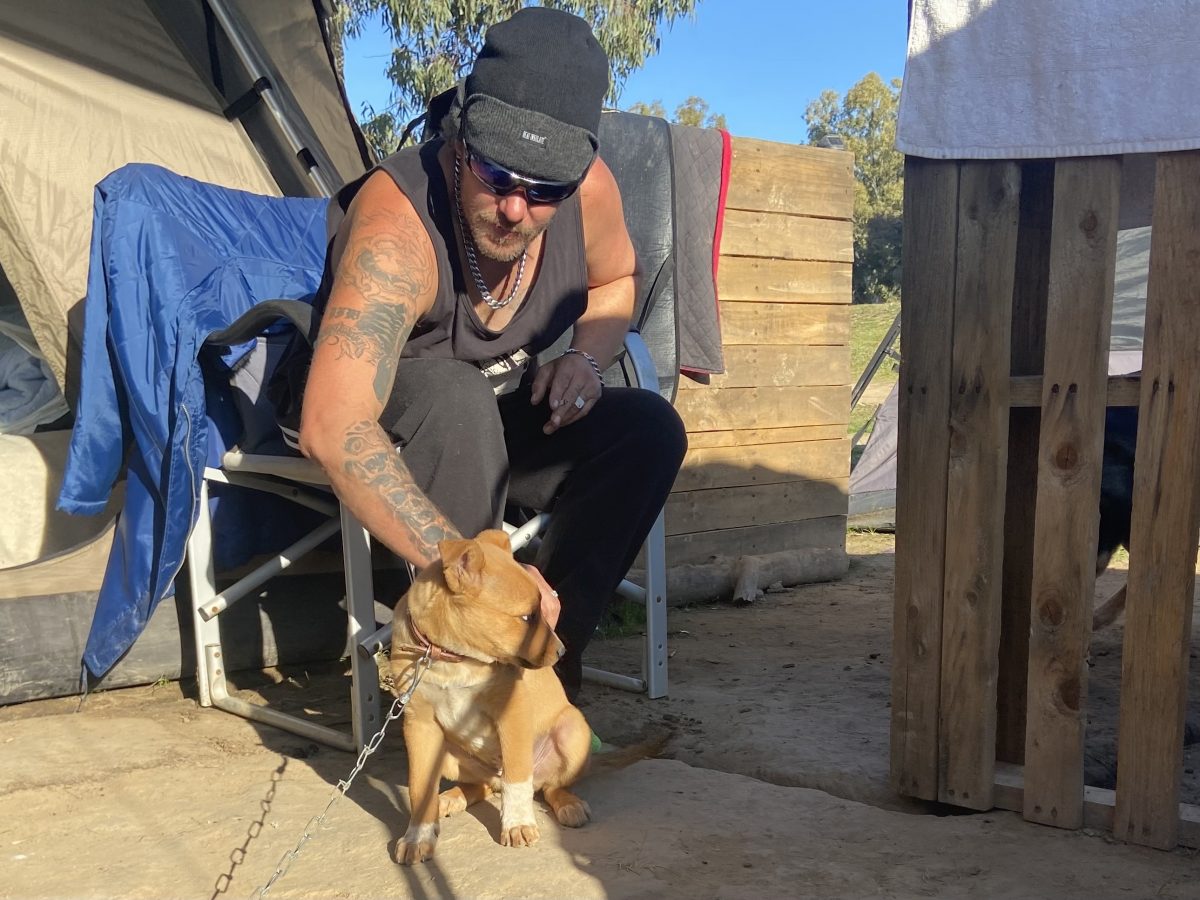 During a stint in South Australia, their rent skyrocketed from $320 a week to $520 and the couple was unable to find alternative accommodation.

“There was just nothing,” Aaron shrugs.

“If you apply for a house, there’s probably 1000 other applicants, so someone in our position on the pension just gets knocked back.”

Skye says they began moving around in the hope of finding a place.

“It got to the point when we were travelling around that we couldn’t afford it properly and there were no places and then that’s how we ended up in a tent at Wilks Park.”

Skye says that while she is grateful for the friendships they made and the support they received, it was a dark time.

“I felt like I was never going to get out of that situation where I felt so stuck and trapped,” she says.

“You feel like you’ve got nothing and then you feel like, what’s the point existing if I don’t feel like I matter or have anywhere to belong?

As their stay stretched into months and winter began to bite, the rough living and lack of hygiene were taking their toll.

The pair were at their lowest ebb when Glenn arrived with the offer of a home.

“I felt like God had just pulled it out from somewhere,” says Aaron.

“There’s been lots of beautiful people helping us.” 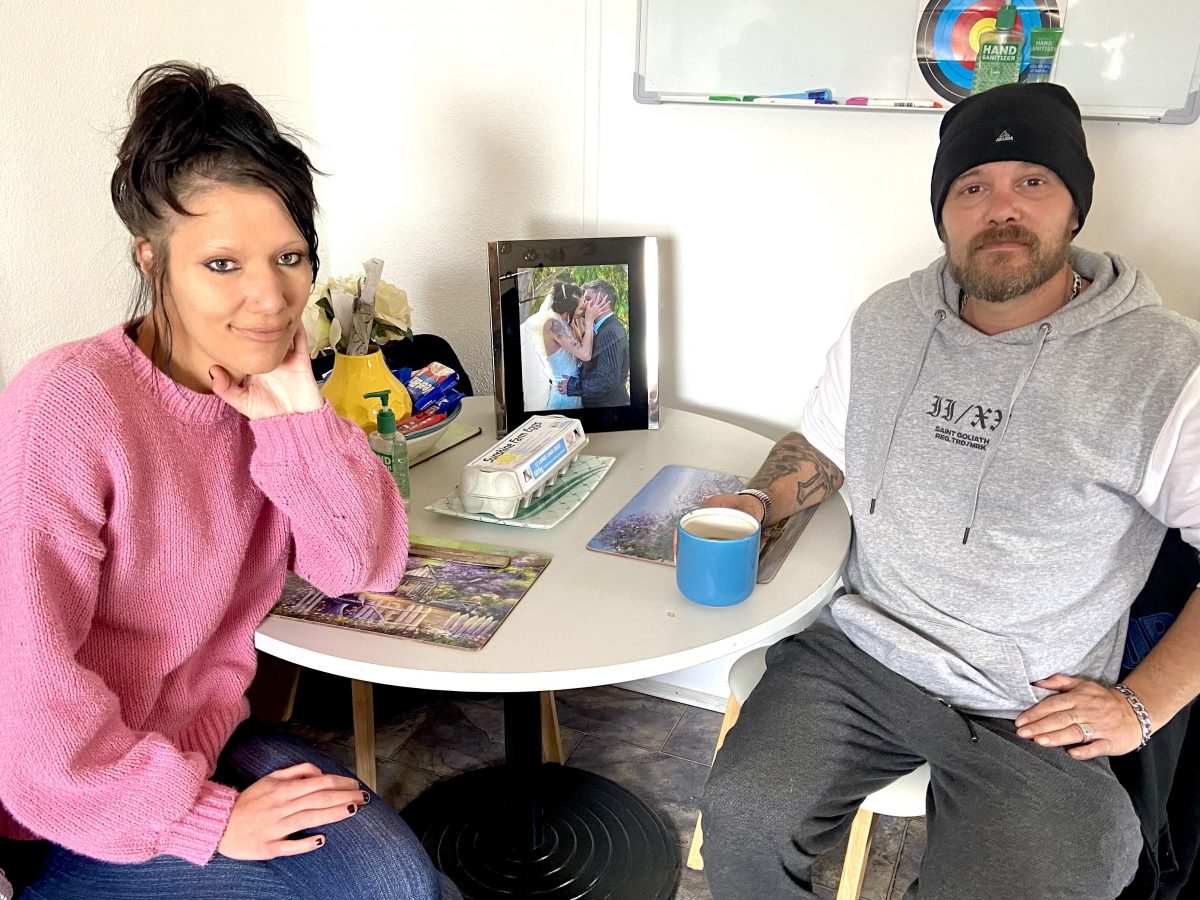 Aaron says that when the Wagga community heard that they had found a place, they were inundated with gifts of food and household items to help get them set up.

“No one deserves to be homeless,” says Skye.

“Anthony Albanese should know more than anyone how important housing is, because when he was younger, he was in a similar situation.”

Aaron nods. “He’s lived our struggle. He needs to put it through that housing is essential, not just for the middle class or the rich.”

While Aaron and Skye fear for their friends who remain in tents and know that there will be battles ahead, they are hopeful for the future.

“Just for us to be in this position, it shows that there is light at the end of the tunnel,” says Aaron.

Congratulations and good luck Aaron and Sky. Look after yourselves. You are right of course about the whole housing issue. As you point out, there are still people out there who have no other choice. We should never be left abandoned without somewhere to call home. A place where you can be happy to be, and safe and secure. Glenn and Ros you are policy in action. Imagine the possibilities if governments were held to account for not mitigating the effects of social inequalities, which are reinforced by the narrow social and political ends of parliamentary democracy serving the needs of capital.

Congratulations Ros & Glenn 👏👏👏
What amazing work you do 🥰🥰