From Inner North to Queensland: Stopping Adani street by street 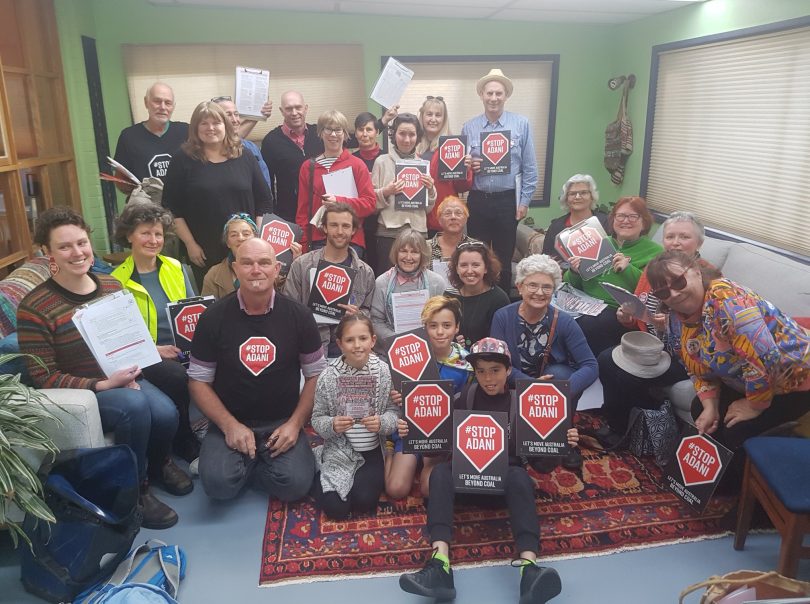 With the state of federal politics, it’s hard not to feel a bit despondent about what is happening around climate change and sensible energy policy. In recent weeks, we have seen the bizarre events that led to the removal of Malcolm Turnbull, the National Energy Guarantee declared dead, and a new Prime Minister who is most known for bringing a piece of coal into the Parliament. Despite NSW and QLD experiencing some of the worst drought conditions in a lifetime, the climate deniers continue to hold sway, and the influence of coal and fossil fuel industries is clear. Indeed, the news that mining giant Adani has been caught illegally drilling into the Great Artesian Basin, and in doing so, putting our groundwater at risk at a time when half the country’s in drought, suggest that the coal industry is emboldened by the chaos within the Federal Government.

So while it’s easy to think as individual citizens and households there is not much we can do, I have been involved in some local action recently which has made me much more optimistic about the future. In particular, over the last few months, I have been involved in a great grassroots project aimed at stopping the Adani Coal Mine – street by street and community by community. This exciting group, dubbed the #StopAdani Inner North Group, is part of a broader movement that is aiming to give a voice to households, suburbs and communities across Australia. Collectively, we are demanding our politicians take a stand and commit to StopAdani. While Queensland is a long way away, this proposal has united our local neighborhood because we know the negative impact it will have in our own neighbourhood as well as to Australia more broadly. The evidence is clear that it will damage our climate, will impact groundwater resources relied on by farmers who grow our food, extinguish native title rights and of course, puts the precious Great Barrier Reef at peril due to pollution and environmental damage.

The campaign is based on a pretty simple idea – that there is strength in the local community. This initiative has seen us connecting with our neighbours to find out who else cares about this issue, encouraging them to get involved through small actions such as displaying signs, doorknocking, participating in community stalls and directly contacting our local federal candidates to take a stand on this issue. The aim of the campaign is to send a message to the major parties that this is an issue we care deeply about. We are asking them to acknowledge the admissions from Adani itself that this proposed mine will create only a modest number of jobs, the reality that it will cause environmental harm and the fact that this is an investment in a dying industry that is only viable when it is subsidised by taxpayer dollars.

To date, the initiative has involved talking with my neighbours and finding out that we have many shared values when it comes to protecting the planet. It has been a great way to get to know them better and work together to try and protect many of the things we cherish about the community we live in. The group is getting together again on Sunday 30 September to talk more about action that we can take to StopAdani. We are just one of many neighbourhood groups that are forming here in Canberra and across the country that are connecting with others who live close to each other and who care about the planet and want to make a difference. We would love to see you at our next event. If you want to come along to the afternoon team in Dickson on 30 September, RSVP here.

I think it’s really important that local communities get involved in issues that matter. What local action are you involved in here in Canberra?

Nathan Stack - 2 minutes ago
Max N Gloria not all bike riders are like that But its a problem There has to be a very clear "responsibility" chain Im all f... View
Brian Rutherford - 20 minutes ago
Mark Newman you realise this isn’t an ABC page right?🤦🏻‍♂️🤦🏻‍♂️🤦🏻‍♂️ View
James Forge - 24 minutes ago
Change that stupid rule about cyclists being able to ride across a pedestrian crossing. At least mandate it so that the cycli... View
Property 14

Mat Kenna - 11 minutes ago
Alex Troy Elsworth Adkins it's the new additions, Forrest has been in the list for about 10 years. View
Michael Bourke - 22 minutes ago
Mark Dowell Farrer, we made it. I bought here 20 years back.... View
Nigem Hamedeh - 28 minutes ago
99% sure every suburb has million dollar homes …. View
Community 37

Deb Batt - 17 minutes ago
Wonderful View
Dee Kaden - 31 minutes ago
What about men that are homeless??? Anything similar for them? View
Mark Heinrich - 2 hours ago
These things are not either or. There’s a need for multiple solutions to multiple problems. Don’t knock something just be... View
Community 43

Steve Whan - 56 minutes ago
Just curious, do instigators of damage have their terms effected due to vandalism caused? I dont know. Just curious. View
Inca Serrated - 2 hours ago
Not a single mention of the conditions that prisoners are living in... Lockdowns, no family contact for over a year, no meani... View
Lori J Tas - 4 hours ago
Kriso Hadskini there are currently rules around how much the govt can enforce people to pay back week to week, sadly, given h... View
Lifestyle 14

Futureproof - 4 hours ago
Great, I'll spend $70k so I can save on my electricity bill View
Breaking 2

Not that long ago, my partner and I were part of the teeming masses of young people trying to get...
News 117

Alison Hassall walking the climate to a better place

From disaster to recovery: Canberra’s role in supporting our neighbours