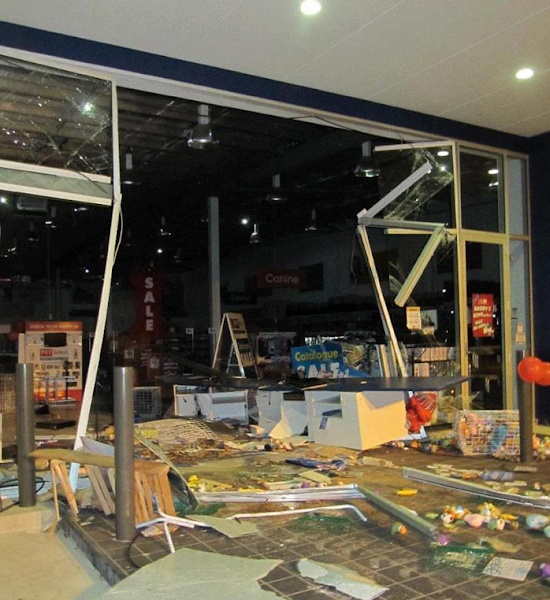 Around 2.45am police attended the premises after reports that a truck had crashed into the store.

Police were quickly at the location and saw a large yellow back-hoe had been driven through the front doors causing significant damage. The back-hoe is believed to have been stolen from the building site next door to the store.

Damage to the front doors and building has been estimated at around $100,000.

Police are urging anyone who witnessed the incident to contact Crime Stoppers on 1800 333 000, or via the Crime Stoppers website on www.act.crimestoppers.com.au.

@EvanJames I went to that pet store a couple of weeks ago. Thankfully they do not sell live animals. They do however keep a rabbit in a cage just at the front of the store. The rabbit is not for sale and is seems to be more like the store’s own pet/mascot. They take the rabbit out for kids to pet etc. I hope it survived!

I imagine her sailors were prouder than usual to have the ship’s name on their hats.

I wonder if she ever sailed past the Titan Uranus. http://www.icis.com/blogs/icis-chemicals-confidential/files/2008/11/shipping-news-titan-uranus.html

I imagine her sailors were prouder than usual to have the ship’s name on their hats.

Why have I failed to notice that fantastic street name until today!?

+1. A new addition to my list of favoured street and location names.

What would you steal from ram raiding a pet store? Seems alot of risk for only as much pet food you can cart away. Not like your going to get $50k worth of goodies for 100k+ damage (and possible risk of injury)

That store is brand new right?
Yes, something tells me to start checking in with the local crazy cat lady.
Or the other competing businesses.
Or the local drunks.
That should narrow it down to a couple of hundred suspects.

Bit of a over the top reaction if you’ve just realised you are out of cat food.

jeez, I hope there weren’t any animals in there? Some of the pet places in Fyshwick have the full range of real live animals for sale.

Why have I failed to notice that fantastic street name until today!?

Julie Macklin - 2 hours ago
Alicia Conley The ACT has no cycle paths. They are shared paths. Yes, those around the lake were built with people on bikes i... View
chewy14 - 3 hours ago
"That they are public doesn’t mean there are no rules for using them." Exactly my point. That the rules should preclude cyc... View
Craig James - 3 hours ago
Keep riding your bicycles on the road, Darwinism at it’s finest 🤷🏼‍♂️ View
News 9

Juanita Tee - 3 hours ago
David Keir what are you specifically doing for them 🙃... View
Liv Miller - 5 hours ago
Rachel Edmondstone love 💓 this View
David Keir - 8 hours ago
Virginia Loizou sounds like you’re the one whinging champ View
Property 28

David Conway - 6 hours ago
Colin Ball totally not fair and they get to play grand theft auto in prison.... View
Community 8

@The_RiotACT @The_RiotACT
If you can bake a cake celebrating the decades since the 1960s, then the annual CakeOff fundraiser should be a piece of cake https://t.co/ZE6j86IEMa (5 hours ago)