Territory And Municipal Services advise that they’re closing the William Hovell Drive southbound on ramp to the Glenloch interchange from 8pm Tuesday 21 June to 5am Wednesday 22 June as part of the Gungahlin Drive Extension.

Well you did ask them to get on with it. 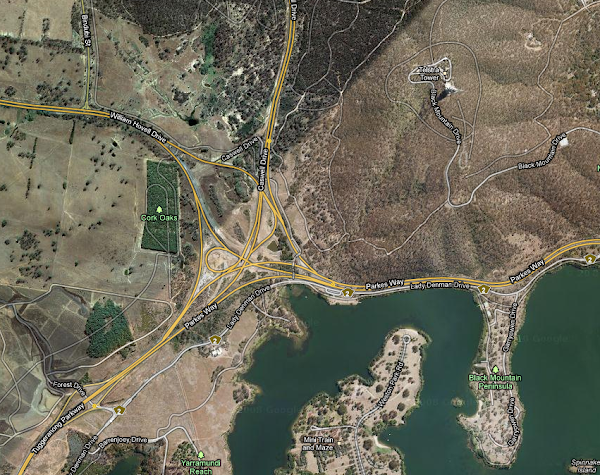 There was a drain there previously, but since the flow of water is no longer tempered by the grass median it probably required some upgrades to cope.

The Tuggeranong Parkway doesn’t have a drain in the middle…

Drive south up the hill towards Hindmarsh Drive during heavy rain and you’ll wish it did!

…rather than an expensive wire rope fence…

Installation costs of wire rope barriers are less than concrete ‘jersey’ barriers and, for cars, their crash performance is arguably superior.

Still, I agree that the works could/should have been finished months ago – literally NOTHING has happened in some parts for several months. Seems like a poorly sequenced project to me.

…And also the wire rope fence in the middle seems an unneccassary expense and probably dangerous to motorcyclists.

The Tuggeranong Parkway doesn’t have a drain in the middle and has large concrete blocks as dividers between the two sides of the road rather than an expensive wire rope fence and it seems to have coped for 20 odd years without any dramas, so why not do the GDE the same way?

While I concede the point for motorcyclists, the use of wire rope crash barriers reduces the amount of damage to the occupant of a vehicle compared to that received when colliding with a less forgiving block of concrete.

I wonder why it seems neccessary to make a drain along the middle of GDE when there wasn’t one previously for however many years it was open before they started ripping it up to make another lane?

And also the wire rope fence in the middle seems an unneccassary expense and probably dangerous to motorcyclists.

The Tuggeranong Parkway doesn’t have a drain in the middle and has large concrete blocks as dividers between the two sides of the road rather than an expensive wire rope fence and it seems to have coped for 20 odd years without any dramas, so why not do the GDE the same way?

We could have had the new lanes opened months ago (and saved tens, if not hundrerds of thousands of $$) if it wasn’t for these unneccassary additions.

Well, this work was completed as stated. And kudos to them for getting it done that day/night as it was freezing and bleak!
Of course, the southbound side of GDE, which is now basically completed, still has no line markings, and still has one lane blocked off with roadwork speed limits still in place (up until the ‘Forest drive’ aboretum overpass!). I can handle that as according to the GDE website, the glenloch bit should be finished in July 2011, so after all these years surely we only have a month left to wait?

Anyway, what is intriguing me at the moment is the northbound side of the glenloch works, which is also due to be completed next month. Two recent bits of work have me a bit confused:
1) The left lane of the northbound glenloch road heading from the parkway towards Aranda has been completed (and of course closed off!) for months. But why is it that they chose now (when it is within a month of completion) to dig a dirty big trench in this brand new (never used) road to seemingly lay some sort of utility pipe under it? And,
2) Further up towards Aranda the other week they drilled holes and concreted in the posts for a wire divider fence between the north and south GDE roads. However, why have they this week removed all the posts and stuffed sponge in all the holes to stops dirt/rocks going in them?

There may be really good explanations for these acts, but it kinda looks like they really don’t plan the work all that well. Is there someone from the Govt asking them what they are doing (with our tax money)? e.g. Surely they should plan in advance and lay all the under-road pipes BEFORE finishing the road?? Is the wire divider fence staying or going??
Does anyone here on RA know anyone involved in the works? I’d love to know explanations for these two examples (i’m sure there are others people have seen, perhaps we should start a list)!

Just gotta hope they actually do what they are suposed to. The number of times I’ve driven through this section, and not a skerrick of work going on. Yet restrictions remain in place 24/7.

Wonder how many idiots will travel a few hundred metres down Parkes Way then try to do a u-turn over the median strip just past the last merge? Seen a few cars do that without any road closures and it is bloody scary when you come around the bend at 80km/h and see a car more or less stopped in the RH lane.

Serious question though, wonder what the detour will be. About the only way would be into the city, exit at Edinburgh Ave and then back down onto Parkes way.

“Well you did ask them to get on with it.”

For sure! That should be the last bit of bitumen work for the southbound side at Glenloch. After some subsequent line marking I’d expect the southbound Glenloch bit to be fully open soon after….? Here’s hoping.

Bill Gemmell - 9 minutes ago
The intention is a noble one. By capturing the excess daytime renewable energy pumped into the system we then have available,... View
Cooby Pedy - 2 hours ago
mazzie agree with you 100 percent in the .meantime these bloody climate alarmist keep spreading there false BS about renewabl... View
Peter Kline - 3 hours ago
Tony Armstrong great news. View
News 8

Brett Cairns - 10 minutes ago
Reggie Milsted straight in the bin View
Roger Kropman - 3 hours ago
This is a disgrace but it reinforces the point that rubbish dumps / tips should be free to dump your trash, otherwise idiots... View
Nick Savino - 7 hours ago
CCTV and fine View
News 17

Patricia Russell - 22 minutes ago
Could have been done so much better. View
chewy14 - 56 minutes ago
Acton, I don't agree that an audit might only find minor fraud, but it's debatable. It will definitely find that the scheme w... View
Acton - 2 hours ago
A review will find some minor fraud but the main rort was the whole scheme itself. It fails on equity and efficiency grounds.... View
Community 51

Liv Miller - 23 minutes ago
Sure is a wonderful and kind thing to do... People don’t realise that there are homeless women here too. It’s so so cold... View
Rachel Edmondstone - 1 hour ago
Liv Miller what a beautiful heart these people have! These are big, BIG things to women in need 🌻 Well done to the whole t... View
Juanita Tee - 11 hours ago
David Keir what are you specifically doing for them 🙃... View
Business 6

Mark Johnson - 5 hours ago
If it’s not licenced what’s it doing on a roadway anyway … View
Julie Macklin - 10 hours ago
Alicia Conley The ACT has no cycle paths. They are shared paths. Yes, those around the lake were built with people on bikes i... View
chewy14 - 11 hours ago
"That they are public doesn’t mean there are no rules for using them." Exactly my point. That the rules should preclude cyc... View
Community 16

Karla Hickey - 9 hours ago
Iain, I agree, also not a jumper (like Pete calls it, lol) View
News 21

chewy14 - 10 hours ago
Nobody, Interestingly, one year later, that number is down to 100 under construction or "planned", with another 300 "proposed... View
show more show less
*Results are based on activity within last 7 days

Where the crunch points will be on the region’s roads

@The_RiotACT @The_RiotACT
A mishap at the Murrumbidgee Country Club put half the greens out of action, but general manager Ray Duncan says the club will be back better than ever https://t.co/U6mM0hq6S0 (2 hours ago)

@The_RiotACT @The_RiotACT
If you can bake a cake celebrating the decades since the 1960s, then the annual CakeOff fundraiser should be a piece of cake https://t.co/ZE6j86IEMa (13 hours ago)