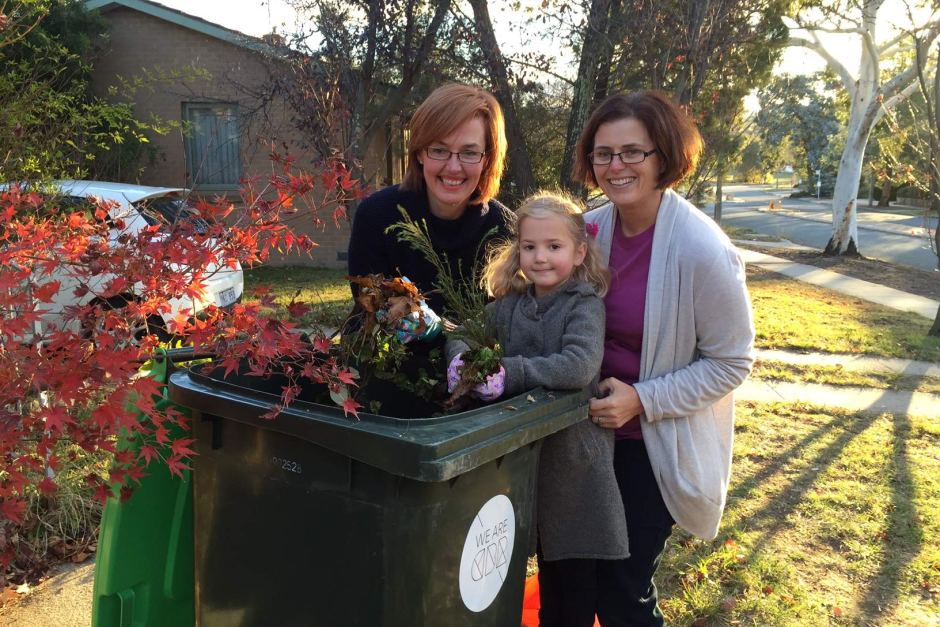 The first of the ACT Government’s promised green bins for garden waste hit the streets today, with the rollout to continue in Kambah and Weston Creek over the next few weeks and collection to commence in those suburbs next month.

The bins will offset some of the 5,000 tonnes of garden waste that pours into landfill each year and save Canberrans from travelling to the tip to dispose of their green waste, such as lawn clippings, leaves and branches.

Organic waste for compost, like egg shells and banana peels, is not allowed in the green bins.

Rubbish collected will be turned into mulch and sold through private companies. Each bin has capacity for 240 litres of rubbish. It also features a barcode to allow delivery to be tracked by the collection contractor using a scanner as the service is for an address, not a person. Each collection will be recorded by the truck. The ACT Government will use data collected in this way for educational purposes if necessary.

In total there were 6180 expressions of interest in the program from residents in Kambah and Weston Creek as at December 2016.

5204 bins have been ordered for those who registered in the area.

First proposed by the Liberals in the run up to the 2012 election, the idea for a separate bin for green waste was originally dismissed by Labor as too expensive. In May 2016, Labor announced it had changed its mind and would launch the pilot program.

Then in the lead-up to the ACT election in October, ACT Minister for Transport and City Services Fitzharris revealed that a Labor government would roll bins out across the Territory, with Tuggeranong suburbs next up from mid-year; Belconnen to follow in mid-2018; the inner north, inner south and Woden in mid-2019 and Gungahlin and Hall in mid-2020.

Ms Fitzharris said 80 per cent of the city would be able to access a green bin within a little over two years of the scheme starting.

Residents had the option of opting out, and those who opted in would pay a $50 deposit for the green bin.

Ms Fitzharris said today that the pilot in Kambah and Weston Creek would help the Government to understand the intricacies of kerbside green waste collection on a larger scale.

“We’re making sure we get it right by conducting a phased roll-out; similar to the recycling bin roll-out [in the 1990s],” she said.

At the time the pilot was announced last year, there was speculation the Murrumbidgee suburbs were chosen to receive bins first because the Weston Creek/Kambah seat was the only one in which Labor had no sitting member candidates. The Liberals had two incumbents in Jeremy Hanson and Giulia Jones, both of whom were elected alongside returnee Caroline Le Couteur, of the Greens, and ALP newcomers Chris Steel and Bec Cody.

Pictured are Cath and Sammi Collins (right and centre) with Minister Meegan Fitzharris.

Carole Ford - 19 minutes ago
They're all about making school improvement plans, but when the teachers tell them what's needed to improve the schools, they... View
Brad Adams - 24 minutes ago
Jimmy Stewart but it’s ok, we have arts grants, inclusivity programs and all the other things to make up feel better. I mea... View
Paul Leins - 1 hour ago
Typical of the Libs - sideline the elected representatives and put it in the hands of a bureaucrat. Any angle to try and unde... View
News 141

Sammie Davis - 41 minutes ago
Cameron Fischer 100% agree View
Paul Magarey - 4 hours ago
If they can pay tax, they should get to vote. No taxation without representation! View
Capital Retro - 5 hours ago
"Most of the boomers on FB have no clue how the world works." Typical of the contempt we receive from young people these days... View
Property 5

John Tozer - 44 minutes ago
Kevin Hingston - Happy to share the windfall profits from price rises too? No? Didn’t think so…! So why do they get to sh... View
Alex Kerr - 2 hours ago
Jack aye look at that View
Kevin Hingston - 2 hours ago
Shane Jasprizza it’s not just pure greed. The supply side cost has gone through the roof last two years. I’m told the inc... View
Sport 3

Michelle O'Donoghue Sweeny - 1 hour ago
Nicole Thomas thanks 🙏 heaps didn’t see this ! View
Nicole Thomas - 2 hours ago
Michelle Bailey is in this article along with Zach. 👍 View
Breaking 2

JC - 2 hours ago
The problem of course is we still do not know what the impact of this variant is,, even you say as much in your own words “... View
News 2

Robert Hawes - 5 hours ago
The police should have one number to call, not three. They are blaming the public for something that is their own fault. View
show more show less
*Results are based on activity within last 7 days

@the_riotact @The_RiotACT
Meet (or should that be meat?) Jamie Sangster of online meat #delivery and #education platform, Meating You https://t.co/CPNnnh7bUb (1 hour ago)

@the_riotact @The_RiotACT
The ACT has recorded seven new cases of COVID-19 in the past 24 hours. There are 119 active cases in the ACT https://t.co/rmITJg2FGS (2 hours ago)

@the_riotact @The_RiotACT
Threads of Policing is a new #exhibition at @_CMAG_ that shines a light on the heroic work of the @AusFedPolice, with rare exhibits on display until March 2022 https://t.co/0u4b34HFGW (3 hours ago)