Gungahlin's marathon cinema saga set to have a happy ending 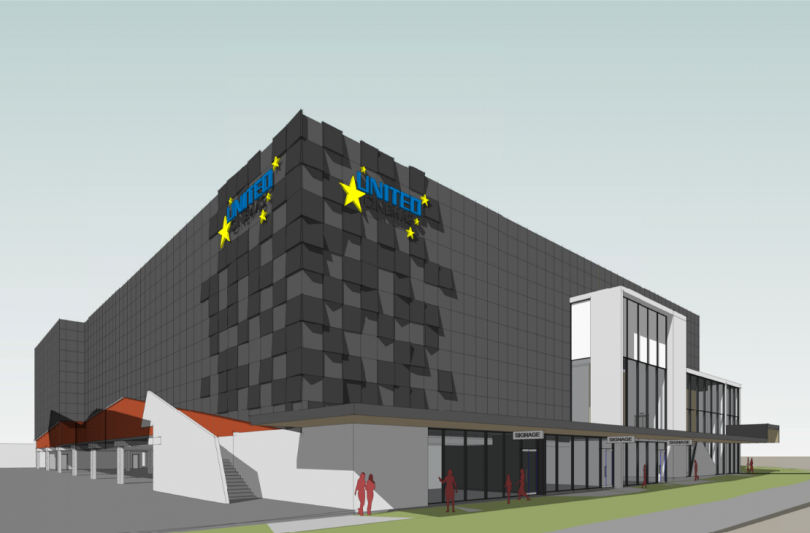 Gungahlin’s quest for its own cinema has had enough plot twists and heartbreaking moments to turn it into its own movie blockbuster but like all good films, the story is set to have a triumphant climax.

After seven long years of turmoil since the ACT Government first called for expressions of interest in 2012, United Cinemas has announced it will deliver an eight-cinema complex on the corner of Hinder Street and Efkarpidis Street, opposite Coles Gungahlin.

It is expected a development application for the project will be lodged next month. If approved, construction of the complex will take around 18 months.

All eight cinemas at the Gungahlin complex will have a dress circle theatre layout, meaning it will have two levels. The bottom floor will have recliner seats where patrons will be waited on with food, with cheaper standard seating on the upper level.

There will be six smaller cinemas of 187 seats and two large ones of 270 seats.

The cinema complex is stage one of an overall plan for a larger precinct, with the block of land bound by Hibberson, Hinder, Efkarpidis and Kate Crace streets set to be the site of a three-level commercial and retail building.

Gungahlin Community Council president Peter Elford said Gungahlin residents are thrilled to find out the wait was nearly over.

“It has gone from a situation where we had no knowledge of what was happening to now having a very clear understanding of what’s happening and in what timeline,” Mr Elford told Region Media.

“It is a great relief that the uncertainty is over and we are moving forward.

“In a perfect world, it should have been much sooner than this but like so many big infrastructure projects in Gungahlin, it has taken a lot longer than we wanted.”

Mr Elford said the icing on the cake is that the cinema will not be a regular movie-going experience.

“The idea that every cinema has a downstairs area with recliners and the upstairs has standard seating is great,” he said. “It means that in addition to finally getting a cinema in Gungahlin, the rest of Canberra has an opportunity to head to Gungahlin and try something completely new and different.

“It’s new for Canberra but we know that we are not being a test site for something and this type of cinema has been successful around Australia.”

Yaser Mehmood finally we are having our own cinema in gungahlin yay! 🤗

Tyson Kennedy I know I said it has both, recliners and cheap seats 😂. So should please every one

And still Queanbeyan does not have a movie theatre waiting, waiting?

According to this they are apparently already building there?!?

Long wait for a cinema my bum. Come to QBN. We are still waiting.

Mickey Sulit finally starting to catch up to Southside.. still a way off though

It’s hardly a trek from Gungahlin to the cinema in Westfield Belco. Or Civic for that matter 🤔

Happy there will be a Cinema in G. But if that’s what they build… it is ugly did the architect go to Brutalism architect school.

Pretty sure they also said they were opening in Queanbeyan….crickets!!

Looking at some of their other cinemas, grand recliner tickets are $25.

Given that hoyts has upgraded all their cinemas with recline seating; I think they will be shooting themselves in the foot if they don’t have the same standard in all of their cinemas. Unless that ‘cheaper’ seating is actually significantly cheaper (in line with limelight pricing).

Melissa Rowe $28 for a recliner down the front😂 think I’ll keep going to hoyts.

From belco, I’d rather go to Palace cinema over this any days

Cool..somewhere for North siders to buy popcorn for $20

Wait, an upper “cheap seats” area with more expensive seating below. Can’t see any issues there 🙂

Ken Owers recliners are below & fixed seating up stairs.

I’ll believe it when I see it.