Foxsports have the grhttp://www.foxsports.com.au/rugby/super-rugby/western-force-host-the-brumbies-in-round-14-super-rugby-clash-at-nib-stadium/story-e6frf4qu-1226060259461″>grim tidings of a draw against the Force in Perth.

But most upsetting for true believers was the way Matt Giteau settled for the draw by kicking the ball out after fulltime.

There’s no point playing for competition points now, you’ve got the ball in hand (admittedly on your own try line), the opposition is tired, you can give it a crack or you can hit the showers.

Giteau chose to hit the showers. He tweeted late last night (but appears to have removed it since) that it was because he had too much “respect” for the Force.

Also did anyone notice Elsom do anything worthwhile? 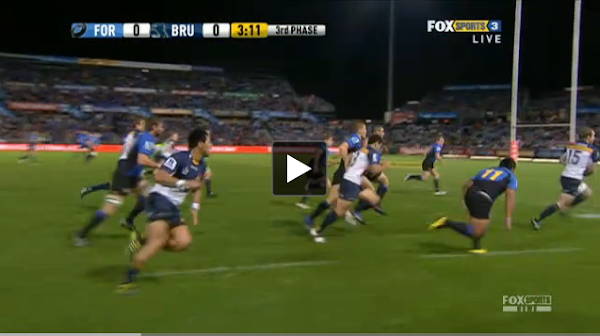 Shows that a stirring speech from Gits can raise the level of effort of the boys to …. a draw.

Also has this worrying quote from Tony Rea: “Listen, if people asked me to be honest last week, I have to be honest this week – yes (I am satisfied), we left nothing out there,” Rea said.

I thought the idea was to put everything out there, or leave nothing in the dressing room? Perhaps the Donkeys have been struggling to understand all the mixed metaphors and that’s what the problem is?

A more impressive physical game than against the Lions. I’ll take that small mercy, after all the handling stuff ups the Brumbies surely would have turned it over. The draw was a reasonable decision. Rocky was solid. Not spectacular, but tough. That knee wrench looked really painful. Speight was rubbish. AAC did nothing. McCabe needs to go to fullback. And what can you do about the front row? There’s noone left to call.

Disagree with the general feel I’m afraid – it is always worth a go otherwise you will simply never know. He should have made the play – the way the game is meant to be played.

I would want to see a ‘tougher’ approach to the game.

Gits’ decision was OK – the likelihood of running the ball 90 metres to score a try after 80 minutes of error ridden rugby would have been 500-1. Better to avoid the loss & restore some pride.

Anyway, how many games has Elsom played for the Brumbies the last 2 years? Would be lucky to be half a dozen. Seems the Wallaby “captain” needs some game time now in a desperate attempt to keep hold of the number 6 jersey for the World Cup. In reality, the Wallably back row for the World Cup should be Pocock, Higginbotham & take your pick of McCalman/Mowen/or even Samo. He made a couple of 3 metre runs during the game – Sharpe was much more dynamic as a ball runner.

Why is Robbie Coleman on the bench??? He adds spark every time he comes on and has better ball control than experienced Wallabies in the Brumbies backline.

On their own line, with a set defense in front of them, can’t kick it out, and not exactly dominating the breakdown… I think Gits’ choice was the only good decision he could have made.

I also think that its extremely impressive that Rocky played the whole game after such a long time out. He looked alright to me, and I’m certainly not his biggest fan – I don’t think he’s the best player in the world but he’s better than Salvi, that’s for sure.

I’ve got no problem with Giteau kicking out when they had 95 metres to go to the tryline. A draw is an excellent result in that scenario. All they would’ve done if they ran it is turned it over and lost the game.

What did you expect from Rocky in his 1st game all year Johnboy? 5 tries and 50 tackles? The fact that he played the full 80 mins (30 of them with a sprained knee) in what was an extremely physical game is a pretty good effort if you ask me. O’Driscoll labelling him the ‘best player in the world’ has been a bit of an unwanted burden for Rocky, now people expect miracles from him every time he steps on the field.

Oh, and Henry “Vaseline Hands” Speight has to go.