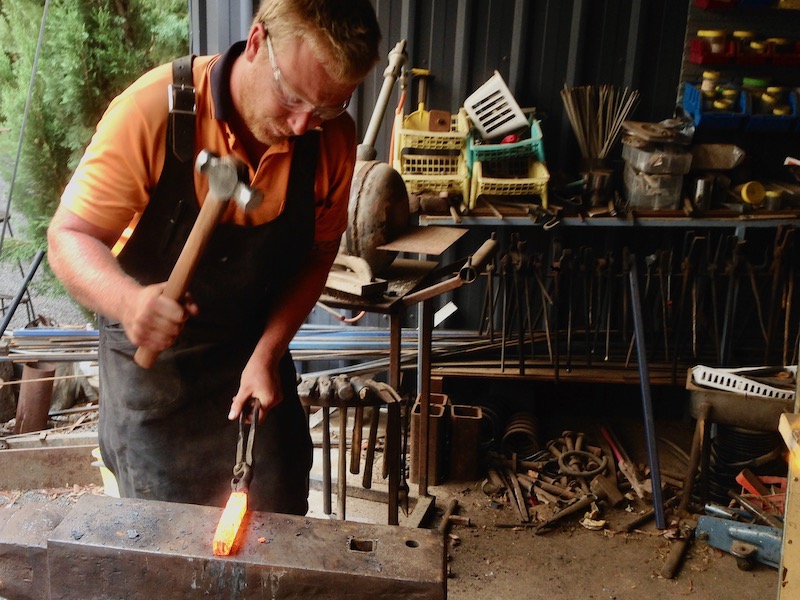 Will Kilpatrick at work in preparation for a busy year ahead at Handmade in Harden. Photos: Supplied.

A small-town blacksmith, an African basket weaver and braided whip maker give Handmade in Harden’s monthly community markets cool authenticity. Held on the third Sunday of every month, the markets will resume on 16 February. Community-driven, they are thriving on homespun entertainment and drought-defying luck.

The blacksmith from Koorawatha between Young and Cowra sold so few items last October it was doubtful he would return. But Harden-Murrumburrah Arts Council president and main driver of the markets, Nicole Scott, watched people become engrossed in his work, and spoke to him afterwards.

“You know what, we are doing OK income-wise, I would like to pay you as an entertainer,” she said. She explained the markets had previously booked musicians and buskers, and sometimes they were hard to get.

“I thought if I pay him, this guy will come every time and people will come to see him because he is interesting. He is excited,” she says.

Trading as Will Forge, Will Kilpatrick is returning for workshops and Nicole says he could add to tourist tours of the twin-town’s significant Australian Light Horse history. Light horse memorials, hotel, cafes, craft shops, a stone church, museum and old flour mill are all within Murrumburrah’s dynamic renaissance square where entrepreneurs promote the district’s early European and Chinese history.

In the 1880 courthouse, the fledgling handmade markets have already raised enough money for improvements.

Cleaning the stable’s floor out the back, Nicole and her husband Robert uncovered the original stone and brick floor and called Damien Shea who has a gutter vacuum. He removed years of hard silt which revealed long-hidden stonework and the rustic brick paving.

“I got really excited, rang the blacksmith immediately. ‘You need to see the pictures, you are going here.’ He loved it. He said, ‘this is made for me’,” Nicole says.

While stall sites sell for about $20 the goods must be handmade, come from the surrounding rural region and not duplicate regular stallholders. Romeo Remi from Wagga Wagga came selling baskets, finished in pastel pink stripes that didn’t last long.

“They were just gorgeous,” Nicole says. “He got smashed with people buying them!”

Nicole Scott outside the old courthouse.

Bad Attitude Braided Creations comes from the gold rush town of Grenfell near Young. A father started it to share his whip-making interest with his two daughters. They make whips, dog collars, hair clips and horse leads, raising money for their hermit crabs. They are among the makers of jewellery, children’s clothes and puppets who are doing brisk business. Stallholder Rhino-J has progressed from the odd pieces of jewellery to filling orders for key rings, and using jars and bottles to decorate with inspirational quotes in her brush script writing.

Nicole urged them all to get their craft on social media sites which sprang up to help drought-stricken farming communities, including One Day Closer to Rain.

“The amount of people from the city buying from people in the bush, on that site in particular, was crazy,” she says. And the quality of goods people can make when they are out in the middle of Woop Woop were just astounding. Just beautiful work, artists drawing, woodworking, so many people at Christmas time were buying from the site. People were running out of stock, it was so good to see,” she says. “That has been a wonderful outcome for our community as well.”

School-aged entrepreneurs unveil their new products at one of two free tables at the markets. The other table is for community organisations promoting events. Murrumburrah-Harden Rotary Club helps, and the money and awareness that are raised are aimed at promoting the performing arts, writing and absolutely anything else in need. 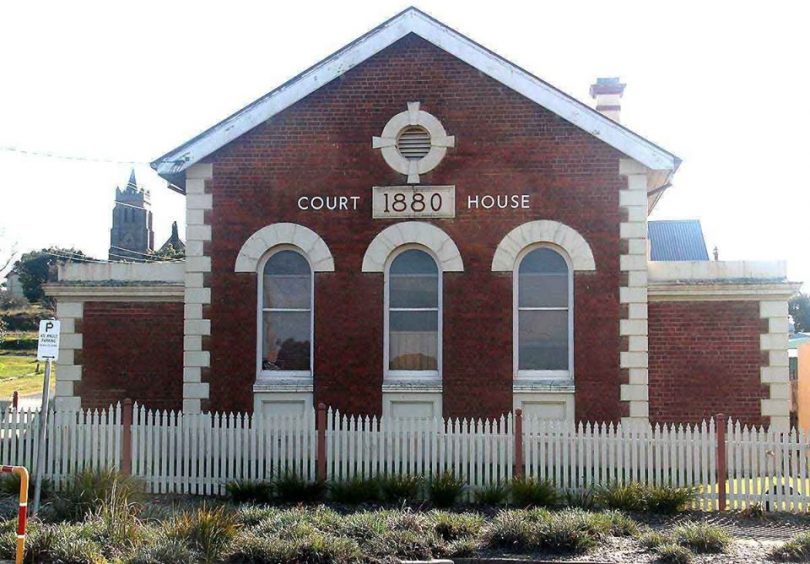 The 1880 court house accommodates markets on the third Sunday of every month.

Handmade markets originally started on the initiative of former Harden Regional Development Corporation staffers. When they folded, Nicole stepped in with the arts council. A human resources consultant, she teamed up with a previous stallholder, Yvonne Whitechurch, an invaluable helper with extensive networks and experience in country markets.

The Harden Murrumburrah Community Market is held on the third Sunday of every month.

The first market scheduled for 2020 will be held on Sunday, 16 February from 9:00 am to 2:00 pm. Enquiries can be made through handmadeinharden@gmail.com or visit Handmade in Harden on Facebook.

I like how Murrumburrah has been revived. It used to be full of closed shops and the activity was at Harden end. Now shops have been reopened and cafes etc moved in. Worth visiting. Murrumburrah has the more interesting buildings.