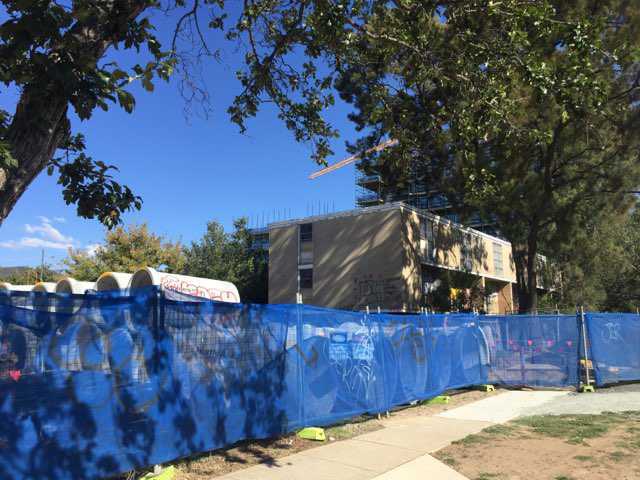 The heritage-listed Mainsonettes will be converted into six terraces as part of the Soho development. Photo: Supplied.

The heritage-listed Maisonettes on Northbourne Avenue will be converted into six individual residential terraces as part of the Soho development taking shape in Dickson, according to the Stage 3 Estate Development Plan lodged with the planning authority.

Soho, being developed by Johnny Roso’s Art Group, stretches half a kilometre from Morphett Street to the Pavilion Hotel and the Stage 3 EDP covers a 150m frontage south of the old visitors centre and backs on to housing in the north and Dooring Street in the south.

The EDP divides the area into the six residential blocks facing Northbourne, a commercial block behind them and another neighbouring more than 4,000 square metre commercial block to the north, next to the old visitors centre, where a seven-storey, 12,000sqm office block is planned.

All are subject to separate development applications.

According to pre-DA plans, the long, narrow office building will include a ground floor lobby, gallery and cafe space, designed around a central atrium reaching to the full height of the structure.

The six residential blocks are proposed to allow the Maisonettes to be re-adapted and sold separately with the blocks matching the existing heritage-listed structure. They range in size from 140sqm to 173sqm.

The 3,380sqm area behind will be developed for commercial use and the Master Plan also contains a heritage park.

The site plan for Soho, showing Stage 3 in the central area. Image: Indesco.

The EDP shows a 2m wide shared path along the Northbourne verge which cannot be wider due to the existing street trees, and a network of shared paths throughout the sites to provide a high level of internal accessibility.

New trees are to be planted along Dooring Street, and there will also be infill planting along Northbourne Avenue. Any trees that need to be removed to enable servicing, driveways and paths will be offset by the planting of new street trees.

Future development on the blocks will be consistent with the Northbourne Ave precinct code for the site and surrounds, including a 10m building setback and landscaped zone for frontages along Northbourne Avenue, the EDP says.

It allows for improvements to Morphett Street to enable traffic movements into the site. Access has been provided on Dooring Street and two extra exit points have been added from the site to Northbourne Avenue to relieve some of the traffic stress on Dooring Street.

As required by the Development Deed, the EDP also covers the upgrade to the nearby Hope Street public park, including a connecting 1.2m wide public path.

The aim of the development is to create an urban village.

“The maintenance of the garden city character in conjunction with significant upgrades to paths and the nearby playground will ensure that this part of Dickson remains attractive and healthy,” the EDP says.

Mr Roso paid $40 million for the entire Soho site in 2016 as part of the ACT Government’s sale of land along the Northbourne the corridor, driven by the light rail project and its urban renewal plans.

It previously contained public housing as well as the visitors centre.

I always thought they would make great B&Bs