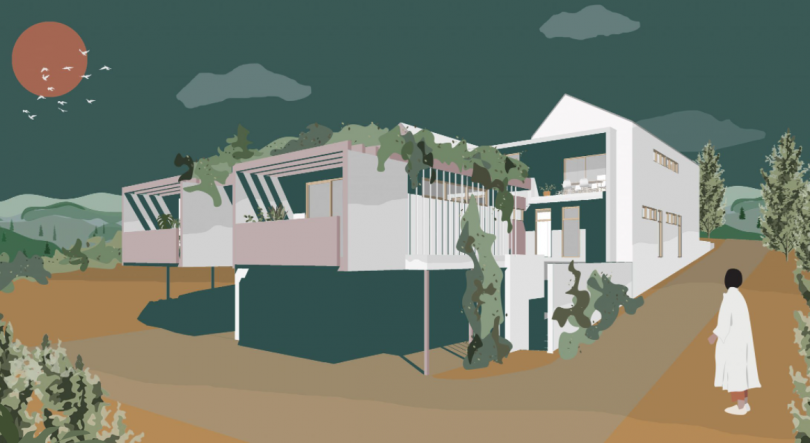 Another of the proposed Demonstration Housing Project homes is taking heat from the local community, this time in Weston.

The ACT Government scheme invites developers to propose innovative multi-unit projects on large single residential blocks to show how the city can densify in a more appealing and acceptable way.

But the proposal requires a change to the Territory Plan, and some residents are concerned about the precedents they set and see these proposals as the thin edge of the wedge.

The proposed Manor Home in Griffith has come under fire from the Griffith Narrubundah Community Association, and now the Weston Creek Community Council has concerns about a proposed three-unit development on a former Mr Fluffy block (Block 2 Section 50) at the top of Weston in Rubbo Crescent.

Verdant is a multi-generational project designed for ageing in place with one unit fully accessible for a person with a disability.

Designed by Rob Henry Architects, it includes two larger four-bedroom dwellings (Units 1 and 2A) and a third fully disability-accessible single-bedroom unit (Unit 2B), that can form part of one of the larger dwellings, or be separately titled as a third unit.

“Accessibility is enhanced with the use of lifts, while the design incorporates garden city principles with private courtyards for each dwelling, as well as deep-rooted plantings and a green roof straddling Units 1 and 2A, as well as green walls,” the Verdant website says.

Interim WCCC chair Bill Gemmell said that while the proponents, lawyers John Nicolic and Shari Blumer, had made changes to the project in response to community concerns, such as an extra parking space and more room for trees, the scale and style of the development and possible impacts on the RZ1 neighbourhood were still a worry.

He also believed the site was not appropriate for the disability component being at the top of a hill, so far from public transport links and other services.

“A disabled person would need a packhorse to get up there,” he said.

Mr Gemmell said the accessible unit was on the bottom part of the block and would need a steep driveway.

He wasn’t opposed to densification generally, but this wasn’t the block to trial such a proposal.

It had to be properly targeted and done case by case, Mr Gemmell said.

Mr Nicolic said the densification debate was an important one but the Weston project was designed to be an exemplar and was appropriate for the block.

He said it was a quality design with strong sustainability features and provided a housing type to the market that did not currently exist.

“It would have been much easier for us to build a dual occupancy which is permitted under the Territory Plan, but we decided to do this because we were interested in creating a template for intergeneration accommodation which would allow all kinds of phases of life to be accommodated,” Mr Nicolic said.

The third title would allow whoever is living there, such as downsizer parents, to retain equity in their home but also live close to their extended family, he said.

Mr Nicolic said there were all kinds of people with a disability and some do drive a car.

“People with a disability deserve to have a view too,” he said.

Due to the current lockdown, community consultation will now be extended until 5 pm Friday 17 September, with a development application expected to follow.

Whilst I really like the idea of innovative architecture, I’m afraid the only thing I see with this design and location is cars parked on the street.

It doesn’t look like a Canberra style home at all. It looks more like one of those beach houses on the Sunshine Coast. On stilts with the air flowing underneath, I would suggest it would be freezing during winter.

Howard Maclean time to roll up the sleeves again

Why is this any different from what has already been happening in nearly all suburbs with knock down/ rebuilds, dual occupancy? A bit NIMBY. It’s the obvious way to get a bit more density. It’s not happening on every block.

People will complain about anything.