House to go on Macarthur Avenue? 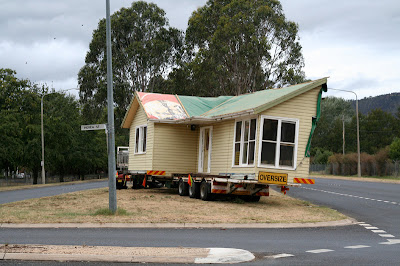 Northsiders were treated yesterday to the sight of half a house parked on Macarthur Avenue. Holden Caulfield had the presence of mind to snap it on his way home.

Apparently there’s a bit of a boom business in cutting up country houses and then putting them back together in new suburbs (often with an extension bunged in between the wings).

Questions remain about parking these turkeys on the median strip, and how did a KFC branded tarp end up holding the roof together?

10 Responses to House to go on Macarthur Avenue?
Filter
Showing only Website comments

Does anyone know what happened to the house (2 storey?)that used to be on the block near the end of Hoskins Street Mitchell? (This was when there was a sharp band at the end). I think there was a storage place there and the house sat in the gravel yard for years.

Just a standrad half-way house in my book ;P (it had to be said)!

Often they have to wiat until a pre set time to get access to the street – especially if there are power lines to (just) pass under.

Friends of ours bought two places from Duntroon and moved them to Pialligo. Waste not want not I say….

There was a guy that lived on Macpherson St that looked like he was in the house moving game. He turned his original Tocumwal into a 6 bedder I think. It was then for sale not long after, but I can’t recall if it sold.

Around the same time another similar house nearby was extended too. I think they bought one house and split it into two and used half each.

It was a bit of a shock, of sorts, driving home yesterday when I turned on to Macarthur Ave from Macpershon Street and saw half a house in the middle of the road. With the way the truck was parked I first thought he might have come to grief, but it looks like he just wanted some free parking.

I followed half a house along the Hume Freeway in Victoria once. I swear the clearance under some of the overpasses must have been less than 50 centimetres.

Ah yes, could be old inner north houses going out of town to be outer suburbs housing elsewhere.

Being a Queenslander, it was a common sight to see a house in transit. Mrs Neanderthalsis didn’t believe me when told that you could go to a used house lot, pick the one you want and have it delivered until I took her to one.

A mate of mine bought one this way a few years ago, $90k for the land, $80k for the house and $10k for delivery. The House company stumped it, wired it, plumbed it in; all he had to do was give it a lick of paint and he had a house for considerably less than buying an existing one.

I see this truck quite a lot in O’Connor. I had thought it was developers buying old O’Connor properties with these houses on the block for around $600k – they then remove the house on a truck, build a massive McMansion in its place and sell for $1.2m. It hadn’t occurred to me that people were bringing these houses in. If that’s the case then the truck owner must live nearby and he’s having a kip before delivery.

Nick Savino - 25 minutes ago
I prefer making coffee at home don’t see the point of cafes everyday View
Nick Savino - 27 minutes ago
Stephen Page-Murray correct the food is rubbish I complained so many times that the food manager and his 2 mates came to my r... View
Amy Nelson - 56 minutes ago
Sashika Mendis we loved living there. Now living in Melbourne, a “most liveable city”, we question why more people don’... View
News 5

Marc Edwards - 13 hours ago
Maybe the Berra Party View
Paul Leins - 14 hours ago
Sure, just bet a former liberal will be a real check to his mates in the liberal party 🙄 View
Michael Ilsley - 14 hours ago
Glad to see him engaged in the community after the tragic loss of his son. View
What's On 1

@The_RiotACT @The_RiotACT
A Mini Cooper drove through the shopfront at KFC Hawker last night. Remarkably, no one was injured https://t.co/5sfUWXD1q0 (38 minutes ago)

@The_RiotACT @The_RiotACT
A 26-year-old from Denman Prospect blew a kiss to a supporter via video link as he was granted bail after being accused of operating in the high end of the drug distribution network https://t.co/6Ihdl3o677 (2 hours ago)