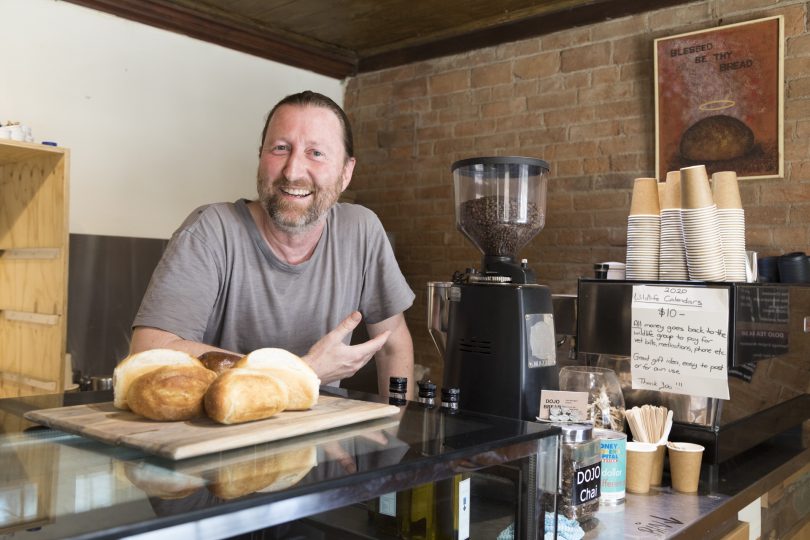 Braidwood business has borne the brunt of the summer bushfires. The town has always been just that little bit remote, but the closure of the Kings Highway was akin to cutting an artery for the rural economy.

Prolonged drought had already put a dent in the local economy, along with a Telstra outage over the Braidwood Festival weekend. Then Braidwood became a cul-de-sac when the road closed and business really fell away.

After a brutal summer, business in back in Braidwood. Our news update for this week comes from the little town with a huge heart, where locals are working to make this weekend a celebration of community spirit that welcomes friends from Canberra and across the region. We're also talking about Royal Commissions, back burning and the January rental squeeze.

Posted by The RiotACT on Thursday, 23 January 2020

Like many towns on the south coast, Braidwood put out the call for people to come and support the town, and they did come. Car clubs and day-trippers came in groups to have lunch and shop. The goodwill and affection towards the town was evident from Canberrans who have stopped on the way to the coast.

When the North Black Range Fire started way back on 26 November, many in the community donned their RFS uniforms and went out to fight it. Some are only just back in their businesses but remain alert as there is still plenty of hot weather to come. 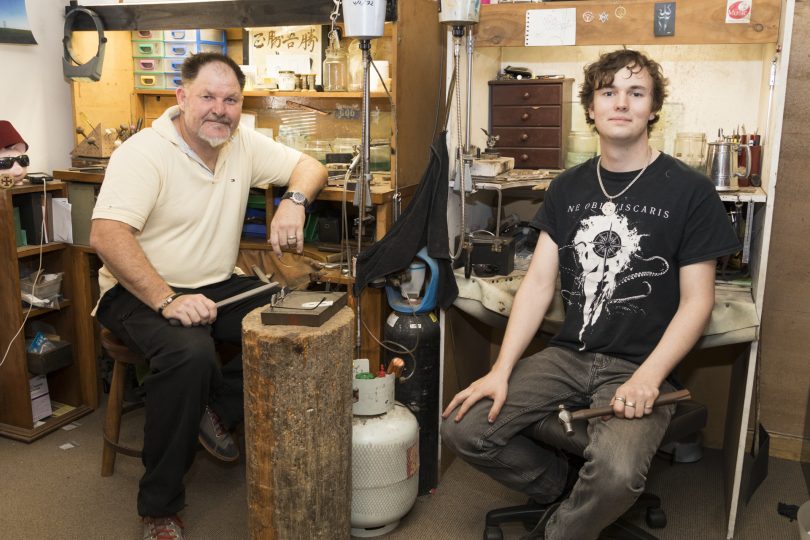 William Verdon and apprentice Logan Preston at his jewellery workshop.

Local jeweller William Verdon lives at Mongarlowe. As an RFS member, he has had only five days in his shop since late November. The manufacturing jeweller left the shop in the hands of his recently graduated and talented young apprentice Logan Preston.

William is typical of many in rural communities who drop everything and answer the call to volunteer with the RFS or SES to keep their community safe.

When the Kings Highway was still closed, the Braidwood Chamber of Commerce organised a big Australia Day long weekend for Braidwood promoted as “BRAIDWOOD – More than a cul-de-sac”.

Braidwood’s many independent and family-owned stores are opening their arms to welcome visitors over the long weekend.

“The aim is to have something for everyone,” says Braidwood Business Chamber Chair, Suzanne Gearing.

“Children can join the busking competition and follow a scavenger hunt, there are shopping trails with the chance to win a box full of Braidwood gifts, musos can busk and vie for a trophy, or you can buy a firie a beer at the pub.”

As well as the markets in Ryrie Park on Saturday, there are art galleries and boutique shops throughout town.

The bi-annual Braidwood Book Fair will be held in the National Theatre all weekend with an enormous range of books to choose from. 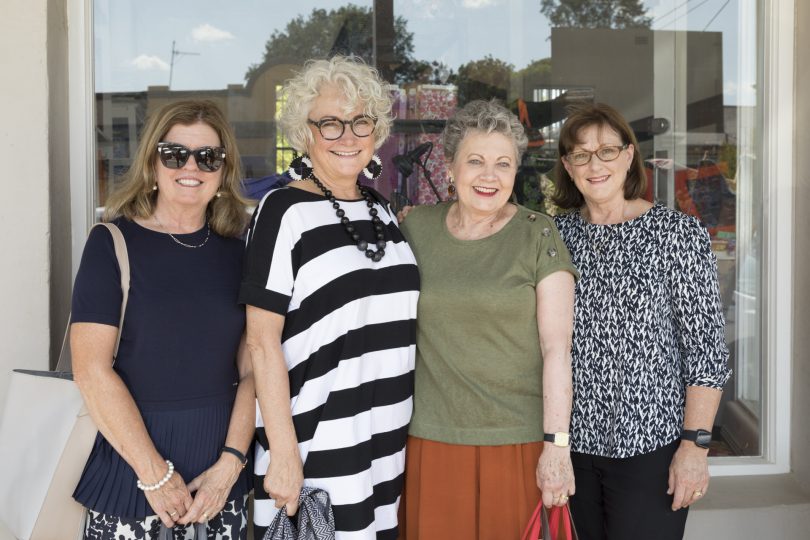 On Sunday for Australia Day, Queanbeyan-Palerang Regional Council will host an event at the Braidwood Servicemen’s Club from noon paying special tribute to the efforts of firefighters, the Rural Fire Service, emergency control centre staff, heavy vehicle drivers who built containment lines, water tanker drivers who supplied water to firefighters, an army of support volunteers and many more.

Along with the many generous members of the community who donated time, money or goods to support fire-affected residents and wildlife, they all have good reason to celebrate their achievements this Australia Day. Local Australia Day awards will be announced at the lunchtime event in Braidwood.

But wait … there’s more! This year’s Australia Day ambassador for Queanbeyan-Palerang is Tim Shaw. Tim’s widely known for popularising the advertising catchphrase ‘but wait, there’s more’, but there’s more to Tim than just a memorable catchphrase.

Tim is an award-winning Australian and international journalist, host, presenter, commentator, producer, MC and keynote speaker. He is a member of the federal parliamentary press gallery, and a board member and director of The National Press Club of Australia.

“It’s a great opportunity to head into town with your caravan and campervan, stay Sunday night at the Club and then spend a lazy day wandering the trails in Braidwood or testing your skills on the golf course,” enthuses Chamber treasurer Neil White, “and the pubs have some great entertainment planned as well.”

Also Braidwood book fair is on

If outdoor pursuits is your thing I can highly recommend Braidwood Outdoors. Dare I say it but it's a fantastic 'man cave '

BCF has nothing on this place, not by a long long long shot !!!

Stopped today and bought some gorgeous local olive oil and olives, and had an excellent chilli pie, 😍🥰😘 Braidwood

Spent all day there yesterday and bought the best sourdough bread with olives from this incredible bakery! All shopkeepers asked were we from Canberra and thanked us profusely for coming down to spend up!

Is the old fashioned lolly shop still there?🍬🍬

A group of us had brunch at Casonava Cafe last weekend and it was delicious and great friendly service. Then we all bought fabulous cold meats and deli goods from Provisions next door. Highly recommend both places

Dojo’s is the best!!

DOJO Bread is the best. Try their olive sourdough. Delicious.

Go Dojo! Remember that Braidwood is not just the Main Street. Look around the corners Canberra.

Go and get a pie from the bakery, yum. Sending you lots of good wishes from Perth 😘

bj_ACT - 10 hours ago
Canberra is definitely improving and cities between about 400k and a million have great amenities without the negatives of ma... View
Melissa Hobbs - 12 hours ago
Need to sort out the health care system in the Berra. Worst in the country View
Breaking 3

JC - 12 hours ago
What sections of stage 1 are poorly designed and need fixing. As for the traffic lights you gotta be kidding right? As both a... View
Capital Retro - 14 hours ago
Three things to remember about the light rail: 1. The Greens want it. 2. It's all about urban renewal; it was never about pub... View
bj_ACT - 15 hours ago
I think you’ve raised some valid questions. There might well be valid answers from the ACT Government to those questions. I... View
Sport 4

Capital Retro - 17 hours ago
"The data is only accessed by ACT Health if it is needed for contact tracing purposes and contact details are deleted after 2... View
garyfrancis - 1 day ago
Under what rule, law or legislation is this being bought to us via? View
garyfrancis - 1 day ago
Argo please. The 28 day "guarantee" really? Who is going to get caught holding onto the information for more than 28 days? Wh... View
Property 36

jorie1 - 17 hours ago
These changes are ridiculous and will only force landlords in the ACT to sell up. It is already not financially viable to hav... View
Maya123 - 20 hours ago
The best time to get houses upgraded would be when the house is sold. This would then cover both rentals and owner live in ho... View
Acton - 22 hours ago
First will be calls from tenant lobby groups for mandatory roof insulation, then better blinds and curtains, double glazed wi... View
What's On 8

@The_RiotACT @The_RiotACT
Whatever you think about assisted dying, Canberrans should be able to decide the issue themselves, says Ian Bushnell https://t.co/uCBheueQMJ (1 hour ago)

@The_RiotACT @The_RiotACT
Rodney Plumb’s workplace has one of the best views on the South Coast, but when the massive new Batemans Bay bridge opens, the 78-year-old will be out of a job https://t.co/3qW3E9sZIB (13 hours ago)