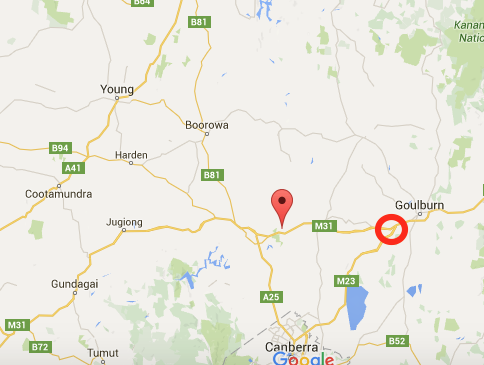 All Sydney to Melbourne Hume Highway traffic is being diverted through Canberra via the Federal Highway turnoff near Goulburn this morning after a truck rolled blocking southbound lanes between Yass Valley Way and Sheldricks Lane.

Police advise motorists to avoid the area or drive with caution due to heavy fog and expected lengthy delays.

The detour means there will be additional traffic on the Federal and Barton highways today, in particular an increase in large vehicles such as semi trailers.

Northbound lanes of the Hume are not affected.

The crash occurred just after midnight, about 2km east of Yass Valley Way. The male driver was treated for minor injuries.

Officers from The Hume Local Area Command and the Traffic & Highway Patrol Command are at the scene.

Marked on the map are the approximate accident site (pointer on the left) and the Federal Highway turn-off where traffic is being diverted (circled).

Why can’t we just say southwest?

Unless one was going from Goulburn to Yass.