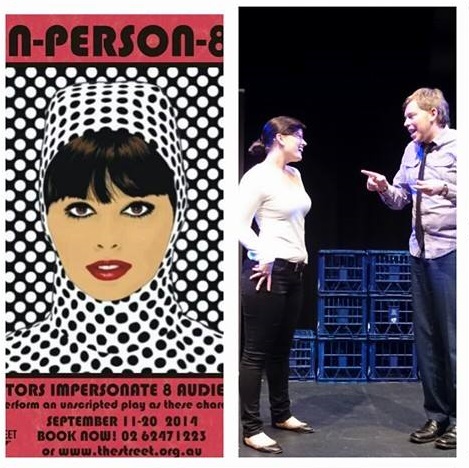 Whenever I told someone the theme for this improvised show the response was usually a mix of surprise and horror. “Well, you see, in the first half a group of improvisers study eight audience members and then in the second half they pretend to be them, improvising a short play.” Jaws would drop and eyes would bulge: this is a show with the potential to tread on a few landmines.

Fortunately the impersonations were respectfully done and the show was highly entertaining. And of course in the name of journalism I put up my hand as a volunteer-victim and ended up impersonated. (If anyone has tips on improving posture, please leave them in the comments for this article.)

At the start of the show master of ceremonies and improv guru Nick Byrne set the tone by telling the audience that previous participants had enjoyed the experience of being impersonated: the feeling was that, yes, I would like to have a beer with that person. Despite audience reluctance Nick managed to coax people onto the stage, sometimes by cajoling us to dob in a potential victim.

In the first half the eight volunteers were interviewed and asked to participate in simple drama games. From the side-lines the improvisers scrutinised them, jotting down notes on quirks of manner and conversation to replicate. Some audience members were tight-lipped while others were recklessly generous. In one highlight a drunk audience member (the now famous “Ben”) completely derailed his interview by bringing every question back to beer. Nick Byrne’s charm as a host kept energy levels high and while this half of the show was preparation for the main performance it was lively fun.

After an interval (where we were free to go to the bathroom, stare in the mirror and ask ourselves what we’d just gotten in for) we were ushered back in. The improvisers took the stage now in the character of the person they’d studied. I was performed by Ben Crowley with hunched posture, arms perpetually jutting out, lips constantly smacking and a broken, disorganised conversational style with a monomaniac focus on theatre. True to the life, then, though of course Ben was unable to recreate my handsomeness and raw sex appeal. There are unfortunately limits to impersonation.

I wondered whether I would be able to remember the mannerisms of everyone from the first half but the sketches were recognisable. The improv itself was of a high standard, only limited by how open the audience members were in the interviews – some improvisers were given richer material to work with. While the performances were described as impersonations, the correct word is caricatures. For example, at one point P.J. Williams (playing a Scotsman) marched onstage with a pool noodle and declared that it was his caber. It was a very funny moment but it emphasised that these were broad sketches: burlesque of personality rather than performance.

In the end though it was a great show. The potentially confronting subject matter was necessary to engage the interest of the audience and fortunately the performers did not push too far: they were gentle, not vicious, in pretending to be other people. This was audience-focused improv that didn’t shirk from a delicate subject but embraced it in a well-judged way. Being played on stage was pretty confronting (yes, my posture is bad), but I was able to console myself later by googling famous hunchbacks. And if Pepin the Hunchback could have such a rich and full life, why should I worry?

Like Jerry Lewis says at the end of The Nutty Professor: “You might as well like yourself. Just think about all the time you’re gonna have to spend with you.” That was the kind of spirit captured in this satisfying show by Impro ACT.

Ha ha. Now I have to Google Pepin the Hunchback too. Great review as usual.