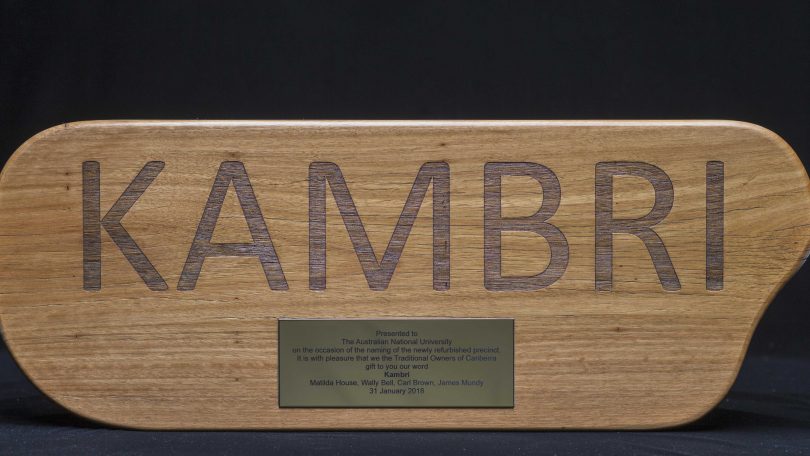 Kambri plaque gifted to the ANU from the traditional owners of the Canberra region. Photo: Supplied by the Australian National University.

Elders from the ACT’s four Indigenous communities have gifted the Australian National University the name “Kambri” for its new precinct that is set to replace the old Union Court.

The name was presented to ANU Vice-Chancellor Professor Brian Schmidt during a special ceremony at the annual State of the University address, in which he launched the ANU Reconciliation Action Plan.

The plan aims to increase the number of Indigenous students and staff at ANU and ensure the University is at the centre of Indigenous research.

“This is not a timid document,” Professor Schmidt said. “I want to see ANU become the destination of choice for Aboriginal and Torres Strait Islander intellectual leaders to undertake research and to contribute to policymaking.”

Ngunnawal Elder Wally Bell said the naming of the new precinct was significant and it was important to allow people to learn about Aboriginal culture.

“It’s quite significant that the usage of the name Kambri is being given a bit more prominence, especially at the ANU. It’s a place for learning and we need people to learn about our culture,” he said.

“The ANU is a place of learning. So to bring these pathways of learning within a campus is extremely powerful,” she said.

Professor Schmidt said the gift reflected the University’s commitment to being a place that honours Australia’s Indigenous heritage.

“For thousands of years, Aboriginal people came together, shared stories and learnt at the places we now call ANU and Sullivans Creek,” he said.

“Kambri will be a meeting place like no other in the world, providing a space for Indigenous culture to live within the social fabric of the ANU and the greater Canberra community.”

“It will be a place for local Aboriginal people to share family stories along the rejuvenated Sullivans Creek and grow local bush food.”

What do you think of the name Kambri for the new meeting place on ANU campus? Let us know your thoughts in the comments section below.

Elspeth Shannon Rollason - 58 minutes ago
All these buildings. If families move here then where are the playgrounds for kids to be active? What is being done about saf... View
Zahidul Alam - 15 hours ago
Timmy Holness so true. Builders and developers who are related to the planners 😂😂😂 View
Ian Brown - 15 hours ago
Belconnen harbour View
Opinion 132

May Agnew - 3 hours ago
MOST DEFINITELY -so many homeless -a national DISGRACE -and wealthy developers becoming wealthier still - causing a concrete... View
George Watling - 8 hours ago
A recent OECD review of 300 Urban Planning studies from across the world has demonstrated that increasing the compactness of... View
George Watling - 9 hours ago
This story is not based on evidence or research. Higher density planning policies have been driving up property prices around... View
Community 7

Lauren Kay - 11 hours ago
I was gutted when I found out Ash. Nigel was so lovely and it feels like I knew him forever. View
Ashleigh McHugh - 11 hours ago
Lauren Kay isn’t it so sad... View
Lauren Kay - 12 hours ago
Drew Forrest I've got a condolence card, but happy to put more cards in a larger envelope if you or anyone up your way wants... View
News 6

JC - 14 hours ago
Depends how you define better. Again hindsite is wonderful. But those who did get in early wouldn’t have agreed with you if... View
JC - 14 hours ago
Supply has been the issue since day dot. What annoys me is how the federal government has spun it all. The issue was they bac... View
News 7

Hoppingmad - 14 hours ago
I can’t help but agree with those who have pointed out that Liberals talking education, when they pump money into independe... View
Food & Wine 21

ANU’s biggest ever bequest came out of the blue

@The_RiotACT @The_RiotACT
Steeped in history, this grand #Goulburn home is on the market for only the fourth time in 120 years https://t.co/ab9NLOo3yC (14 minutes ago)