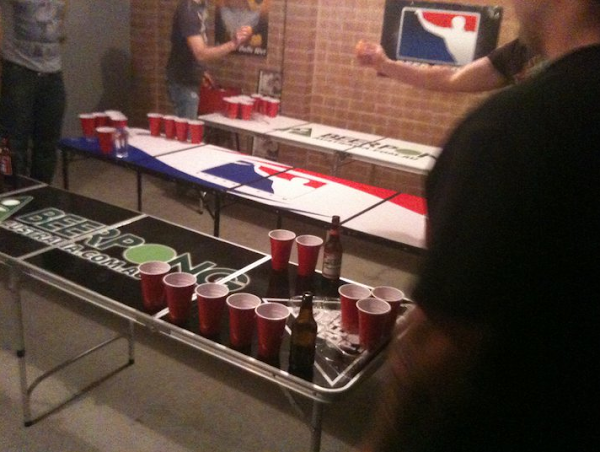 Word reaches us that 18 Canberrans are going to Las Vegas to enter the 7th annual World Series of Beer Pong.

The Australian Beer Pong Squad will be the first known group of Australians to contest the WSOBP!

What’s Beer Pong?
Beer pong is a drinking game in which players throw a ping pong ball across a table with the intent of landing the ball in a cup of beer or non alcoholic
beverage on the other end. The game typically consists of two two-to-four-player teams and multiple cups set up, in triangle formation, on each side. Rules vary but typically there are ten plastic cups arranged in a triangle on each side. Each competitor then takes turns attempting to shoot ping pong balls into the opponent’s cups. If a ball lands in a cup, then the contents of that cup are consumed, and the cup is placed aside. The first side to eliminate all of the opponent’s cups is the winner.

‘It is every child’s dream to represent their country doing what they love, and these young men from the nation’s capital are living such dreams, and no, that isn’t becoming politicians. From humble beginnings, rose 18 brave warriors ready to fly the green and gold for their country, doing what Australian’s do best, drinking beer (responsibly) and winning. Individually, they are man marvels in their own right, but together, they are The Australian Beer Pong Squad.

The squad will go into battle at the annual World Series of Beer Pong, in Las Vegas, Nevada on the 1st of January, 2012. These strapping young lads are hoping to walk away with the winnings in WSoBP VII, US$50,000.

The World Series had just under 1,000 brave individuals enter in 2011, but this will be the first time a squad of Aussies enter the domain of champions. Given the tools of their trade by their sponsors, this group of young men are ready to shine on the international stage.

Provided with cups by REDDS Cups, thongs by Willi’s Footwear and tables and balls by Beer Pong Australia, these modern visionaries are well endowed, and are flying the flag for Australians in the international Beer Pong community. If you think sponsoring this young group of lads would be something you are interested in, they would be more than happy to display your brand on their already chockers jerseys or provide naming rights in exchange for your wares.

“..these modern visionaries are well endowed..”

Hahaha! That did make me chuckle. What a hilarious idea!

“..these modern visionaries are well endowed..”

David Ironside - 44 minutes ago
Tracey Ironside yes there a few around Fadden recently View
Sandy Gibbs - 50 minutes ago
Kathy Little Suzy Obsivac these are the ones we saw on our walk today. Timely article!... View
Joanne Boyanton - 1 hour ago
Had some in our back yard View
Property 39

Margaret Welsh - 1 hour ago
Yes, and I'm not a Liberal voter these days. I hate the number of apartments. When we downsize we'll be moving out of the ACT... View
watto23 - 4 hours ago
So why can't the liberals provide a solution to this problem. They are very good at pointing out everything Labor does wrong,... View
Opinion 1

facebook_user - 3 hours ago
Excellent article Hon Deepak-Raj Gupta. You are spot on regarding the Pandemic COVID19 and themself reliance required by Canb... View
Opinion 1

Acton - 4 hours ago
$100,000 on a rebranding exercise, paid to some contractor, once again demonstrates the waste and extravgence of the ACT gove... View
Community 33

Jeremy Calero - 5 hours ago
Kaitlyn nothing will stop it lol View
O L - 6 hours ago
Wonder what that means for rental longer term? Probably go up after covid to match increase in housing values View
Rodney Weber - 10 hours ago
Shiva Sapkota A lot of the older areas also have many poor quality houses. Cheap materials :-( View
Community 12

O L - 6 hours ago
Great, that means little to no federal funding coming our way View
Annie Mills - 7 hours ago
Ben Winkler I have a sneaking suspicion that people in the bushfire affected areas are so desperate for the help they have be... View
Craig Griffiths - 8 hours ago
I've become convinced over the years that tabloid media have a psychological code in the messages they put out during electio... View
Property 10

@The_RiotACT @The_RiotACT
Yerrabi MLA Deepak-Raj Gupta says COVID-19 can teach us all to be more self-reliant and to have a stronger focus on our local community and businesses https://t.co/qoDy90jHd7 (4 hours ago)