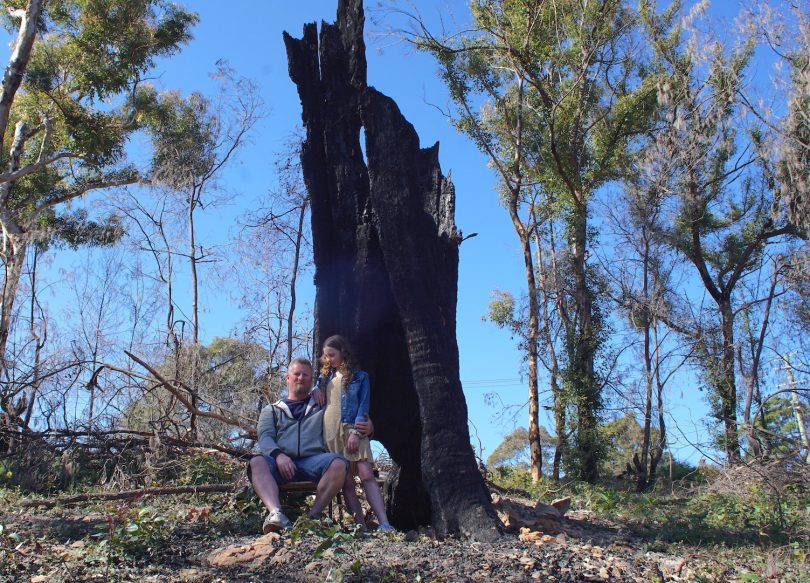 Jim Hughes and his daughter, Raeden, are part of a campaign for the community to be prepared ahead of the bushfire season. Photo: Supplied.

“It’s in that first instant when I wake from my disjointed sleep, wondering where the hell I am, it just gives me the bloody creeps.”

This is the first line of a poem by Jim Hughes, whose home at Catalina, near Batemans Bay on the NSW South Coast, was destroyed by bushfire on New Year’s Eve 2019.

Jim is a school bus driver who had just completed renovations on his house where he lived with his daughter, Raeden, when the fire struck.

As Jim’s poem progresses, he laments how he wishes he had done more to get ready for the impending firestorm.

He is now part of a heartfelt campaign by the NSW Rural Fire Service (NSW RFS) featuring people who lost their homes during the Black Summer who tell of their experiences so others can learn ahead of this season.

“From seeing the first little bit of fire on the ridgeline to my roof collapsing was about three hours,” says Jim in the television commercial. “When the fire came up, it was like a hand reached out and the fingers just took houses.

“I wasn’t prepared enough, looking back. I definitely would have packed more photos and cards and pictures that she’d [Raeden] done for me over the years.” 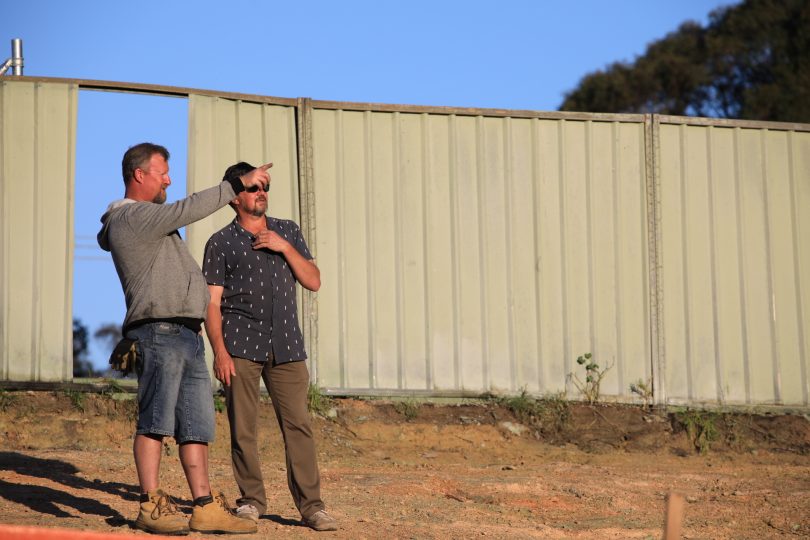 Catalina resident Jim Hughes (left) and a neighbour at Jim’s property that was destroyed by bushfire on New Year’s Eve. Photo: Supplied.

“Our new public awareness campaign this year features personal accounts from people who lost their homes in last year’s devastating bushfires,” said Commissioner Rogers. “People need to understand the risk and prepare for it – and do it now. You can never be too prepared.

“By taking the simple steps, you can prepare your property. For example, removing flammable materials from their yards, clearing leaves from gutters, checking hoses can reach all around the house.

“The single most important thing every family can do is have that five-minute conversation about important decisions such as when to leave and what to take if a fire threatens your home.”

NSW Minister for Police and Emergency Services David Elliott said while this bushfire season will not be as extreme as last year, people still need to be careful when using fire and observe the rules around total fire ban days.

“The rain has brought with it fire danger conditions with increased pasture growth,” said Minister Elliott. “As the grass dries out, there’s a very real potential for fires, particularly across western NSW and later in the season.”

During the past bushfire season, 26 people were killed and more than 2000 homes were destroyed across NSW.

Fire and Rescue NSW Commissioner Paul Baxter urged people to consider the risk of bushfires ahead of the summer holiday period.

“As we move into summer and the holiday period, and especially given the travel restrictions with COVID-19, many people will be visiting bushfire-prone areas,” he said. “While they might not typically live in an at-risk area, it’s important they have a plan for the area they are visiting.”

Anyone wishing to light a fire for pile burning or hazard reduction will require a permit, which is free to obtain from a local fire control centre. On days of total fire ban, all fire permits are automatically revoked.

You can check how fireproof your bushfire plan is in just five minutes on the My Fire Plan website, and view the television commercial below.

How fireproof is your plan?

Last summer's bush fires taught us some terrifying lessons about the importance of being prepared and having a plan. Learn from the experience of others this bush fire season.