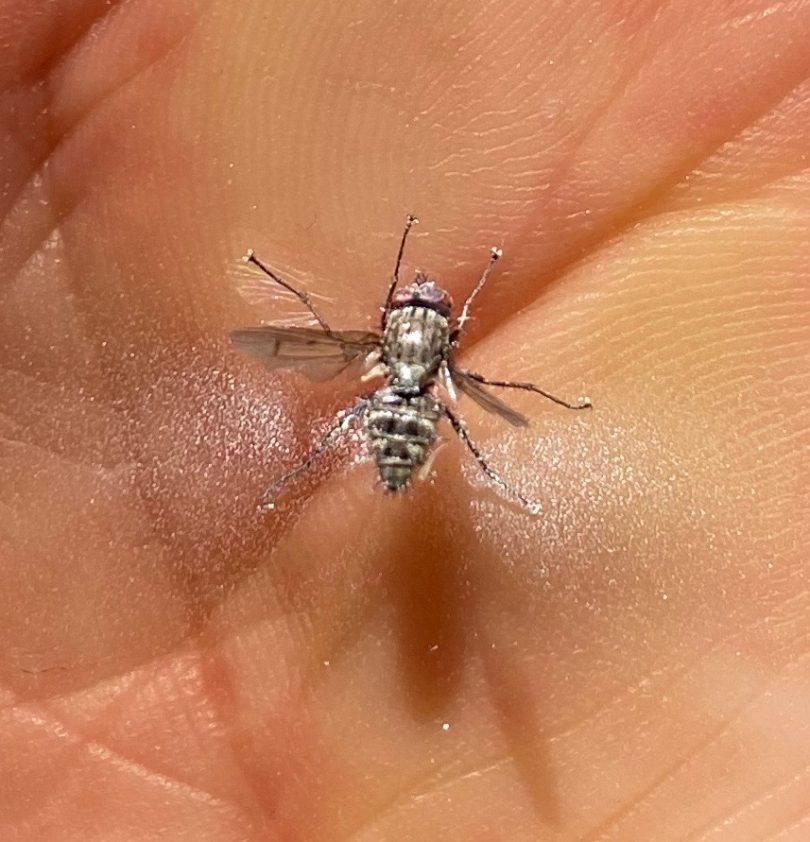 A dead fly that has been attacked by the fungus Entomophtora muscae. Photo: Dr David Yeates.

The annual Aussie salute is in full swing around the region, with flies and mosquitoes heralding the return of the warmer months with their distinctive buzz.

Despite their important ecological role, there aren’t too many of us who welcome the return of these pesky little blighters – and this year they seem to be more prolific than ever.

However, Dr David Yeates is the exception.

“I’ve been fascinated by insects since the age of three,” he says. “I was born to be an entomologist.” 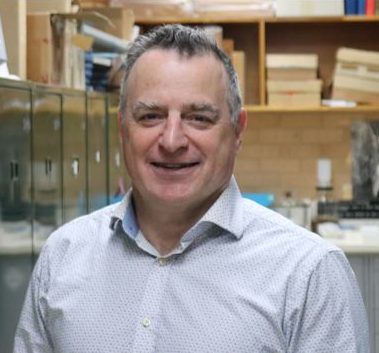 Dr Yeates joined the CSIRO almost 20 years ago and has made the systematics and evolution of insects, particularly Diptera (flies), his major focus.

While anecdotally the fly population seems to have exploded recently, Dr Yeates believes it’s likely just the usual cyclical increase that comes with the changing seasons.

“Immediately after the bushfires there would have been an explosion of flies that feed on carrion,” he says.

“It was a lovely smorgasbord for them in February. Some immatures may have sat in the soil as pupae during winter and emerged in spring, but all insect activity has increased in this warmish, wet spring, including areas far from the fires.

“I don’t think there is anything particularly fire-related going on.”

While it might seem that insects choose to annoy us during summer, Dr Yeates says the real reason for their population boom is a complex interaction of good rainfall, availability of food sources and increasing temperatures.

“Insects are ectothermic, or cold-blooded, meaning their body temperature depends on the external environment,” he says.

“Many insect species emerge from a winter resting phase in spring and summer to begin their winged adult life stages. These highly mobile, hungry, sex-obsessed young adults are the ones that interact with us during summer. Imagine Schoolies Week for insects lasting an entire three months.”

What is interesting this spring is the emergence of a fungus that seems to stop flies in their tracks.

“You may have seen dead flies still clinging to walls or windows,” says Dr Yeates.

“It’s the result of an interesting fungus that attracts flies. The sick fly lands on a surface, dies, the body hangs on through the claws and the fungus fruiting bodies grow through the fly body, eventually spraying fungal spores around.

“Any fly or other insect coming to feast on the dead fly or just having a look will get a spore and be infected. I’m seeing it much more this spring.”

While some insects such as mosquitoes, bushflies and blowflies will try to crash your summer party, Dr Yeates says most species, such as flower flies, are busy eating pests in your garden for free.

“I’ve noticed roses covered in aphids already,” he says. “They provide a great feast for other predators and other parasites – wasps, fly larvae, etc, all eat them.

“People go out and spray the aphids and that inadvertently kills all the good guys. You get rid of them and then the next time you get aphids you don’t have the predators around.”

While garden infestations and uninvited barbecue guests are the focus for most of us, insects play a vitally important part in Australia’s economic health.

“We don’t have the pests that many countries have,” says Dr Yeates. “We can produce a clean, green product at much lower production costs and it’s important we keep that status.

“Only a third of insects have names. They are really understudied. We do a lot of research in the insect collection to try to diagnose nasty pests from native insects.

“It’s really critical if you are a quarantine officer at the border that you have the diagnostic tools to decide whether something is an invasive pest or just a native insect.”

Our poor dog got one in her ear yesterday and tried to dislodge it for ages! Nasty little things!

Ingrid Luker - 19 minutes ago
Hope not. Years on the Gold Coast really taught me to hate these events. View
Wendy Kefford - 24 minutes ago
Yes please View
Toshy Roy - 24 minutes ago
during lockdown so no fan get to watch the race live View
Community 43

Sam Da Cruz - 29 minutes ago
India Elise this why you were painting rocks yesterday??? 😂 View
Irene Kendall - 30 minutes ago
Beth Gardner last year we had teddy bears in windows, so it will be fun looking for the rocks. Stay safe and enjoy your walks... View
Sandra Cole - 42 minutes ago
WOW! Wonderful thought. View
News 7

kenbehrens - 36 minutes ago
Why has the ACT interpreted the National Plan as overriding jurisdictional sovereignty? The National Plan is an agreement of... View
gazmos - 1 hour ago
The casualty of the war on COVID has been the suffering of the families affected, and the truth to the rest of the community.... View
bikhet - 5 hours ago
The first sign of admitting, as NSW and Vic have done, that lockdown didn't work this time. It may have the first time around... View
News 16

Lizzie Parlane - 1 hour ago
Incredibly disappointed. I have used both pools for 18 years now - through pregnancy, to teach my son to swim, to keep fit. T... View
Liz Yuncken - 2 hours ago
I'm so disappointed about this decision. AIS was almost the only place in the ACT that offered deep water aquarobics - other... View
Dianne Webb - 3 hours ago
I was really shocked and saddened to hear the AIS gym was closing. It is hard enough coping with lockdown without another blo... View
Lifestyle 29

Timothy Bailey - 2 hours ago
I love letting it make its decisions, which also leaves more of me left over for the task of driving. I did try putting it in... View
Motoring 6

TimboinOz - 2 hours ago
SUVs are popular because they fill a lot of needs. We are very happy with our 2015 2.5L Subaru Forester. I've only once manag... View
Graeme Tyers - 3 hours ago
James Forge will be interesting to see the next gen. 3lt petrol or diesel, RWD (potentially AWD) and a hybrid option... View
Dennis Williams - 4 hours ago
Love the styling totally agree the Mazda6 is a fantastic piece of design but when I test drove it many years ago I couldn't b... View
Opinion 23

Researchers welcome Moroccan natives who may change the face of farming

@The_RiotACT @The_RiotACT
With lockdown forcing many #Canberrans to work from home, IT issues and computer frustrations are rising, but David Crawford from Crawford's Mobile Computer Service has some helpful #tips https://t.co/xT2V7lLfas (30 minutes ago)